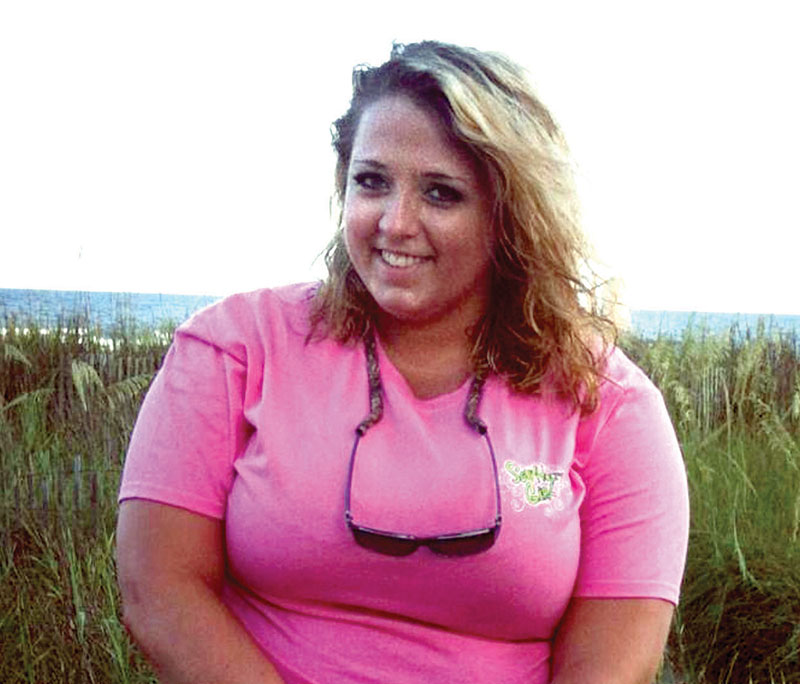 Submitted photo Samantha Harkey died at age 23 from MS complications. Her PA has created a foundation in her name to help anyone with a critical or terminal illness with non-medical expenses.

Her death affected him deeply.

Samantha, the daughter of Bobby and Brenda Harkey, died Jan. 30, 2016, of complications from multiple sclerosis. She was 23.

Taylor has chosen to honor the young woman’s memory by forming the Samantha Harkey Foundation. It’s meant to help anyone in the community with non-medical expenses related to a chronic or terminal illness.

Coincidentally, the foundation’s first fundraiser was for Justin Smart, another of Taylor’s patients, who has MS. Smart is now in India for a stem cell transplant which will “reboot” his immune system, and hopefully improve his symptoms. Taylor says he treats about 10 patients with the disease — that’s unusual for a small, solo practice. Taylor has been a PA for 26 years, and has been on his own for the past eight years, working under a collaborative agreement with Dr. Tim Dagenhart.

Taylor and the Harkeys want to raise awareness — and money — for the foundation. The Harkeys serve on the foundation board, along with Jessica Dixon, a 23-year employee of Taylor’s, and Rodney Wallace, the owner of Kickfit Studio.

Taylor says the foundation wants to help those who need assistance with paying rent or buying groceries.

“We’ve even helped people with burial expenses,” Taylor says. “We’ve allowed an openness with it. We don’t try to micromanage the gift.”

The Harkeys, who both work for Food Lion and attend Grace Lower Stone Church, see the foundation as a way to carry on their daughter’s name.

Although Samantha wasn’t diagnosed until December 2014, Harkey says he can trace their daughter’s symptoms back to her senior year in high school in 2010.

“She was hurting all over and had panic attacks,” Brenda Harkey says. “We thought she was just overwhelmed with going to college. We didn’t know what it was.”

Taylor notes that MS is not an easy diagnosis to make. “It’s often a diagnosis of exclusion.” And patients Samantha’s age aren’t typically diagnosed so early.

Still, Samantha continued to work as a certified nursing assistant at Autumn Care and at Novant Health Regional Medical Center on weekends. At her death, she’d just been accepted to nursing school, and she’d volunteered at Taylor’s practice in high school.

Her junior year at Wingate University, Samantha had what her parents called “an episode,” with problems walking. When they went to pick her up, they thought she was drunk. She wasn’t. Bloodwork indicated she was dehydrated, and had a recurrence of mono.

After Brenda Harkey’s niece was also diagnosed with MS, Taylor decided to have Samantha tested as well.

Samantha told her mother beforehand, “If it’s MS, don’t get upset. At least we’ll know what it is.”

And that’s the diagnosis she received.

Samantha began treatment in February 2015. Her dad says he couldn’t tell the infusion therapy helped her much.

Samantha, always a “MaMaw’s girl,” was living with Harkey’s mother when she died. Her immune system couldn’t handle the disease, he says. “I think her body just gave out.”

The Harkeys knew the high cost of treatment for MS, and decided they wanted to help others. In the spring of 2016, they formed a team, Samantha’s Heroes, and walked in the MS Walk in Kannapolis. In three years, they’ve raised $16,500.

Their daughter, Sabrina, 19, a rising sophomore at Western Carolina University, has gotten her friends in on the project, so the whole family is involved.

Not only are the Harkeys raising money, they’re raising awareness.

“MS is not talked about as much as cancer,” Harkey says. “It’s tragic. But Samantha talked about it. I don’t want anybody else to go through what we’ve gone through. It’s a loss you never get over. Once this happens, you know who your friends are.”

With the foundation, the Harkeys hope to make new friends. And they have high praise for Taylor.

“I couldn’t ask for a better doctor or friend,” Brenda Harkey says. “Jeff is part of my family. It’s just overwhelming when I see Samantha’s picture on the posters and flyers for the foundation.”

Taylor and the board members are planning fundraisers each spring and fall.

“I have definitely learned it is not easy raising money,” Taylor says. “And it’s a process to create a 501-c-3 foundation. You just have to keep plugging. It can be done, but it’s an arduous process.”

It’s also been a blessing to the Harkeys with their fundraising efforts.

“The foundation creates complete transparency and legitimacy with fundraising,” Taylor explains. “We’ve been able to have more of a reach with the foundation. We’ve had really good success so far.”