Town of Faith Street Dance fun for all ages 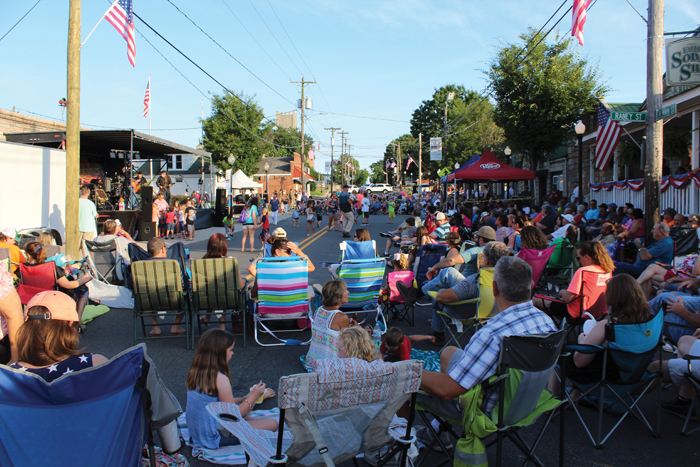 Andie Foley / Salisbury Post - Crowds gather to enjoy the tunes of Wayward Reason at the Town of Faith Street Dance this Saturday. The dance serves to kick-off Faith Fourth festivities.

The dance featured a musical performance by local band Wayward Reason, and many gathered on lawn chairs and blankets to enjoy the classic tunes.

Those gathered sat around an expanse of empty street space on North Main Street GQ: the makeshift dance floor and location of group line dances and couple slow dances alike.

Two among those dancing were twin sisters Mary Greene and Eileen Delong.

Greene and Delong moved to Rowan County from Ireland years ago and said they were big fans of Wayward Reason.

The singer went to high school with their kids at East Rowan.

Before splitting up to slow dance with their significant others, Greene and Delong were among a few clusters line dancing.

“That little dance right there, we learned how to do that when we were 12 years old,” said Delong. “We were Irish dancers growing up.”

Others elected to skip out on the dancing, choosing to enjoy the music and people watch instead.

Susan Giessler was out with her husband Randy, as well as her mother- and father-in-law Martha Jo and Randall.

The foursome had cruised in to enjoy the music on a golf cart.

“It’s the only way to come,” said Susan Giessler, “It’s easier to get down here. The older we get, the more we ride the golf cart.”

The Giesslers said they live close enough to Faith Fourth festivities to hear the music each night. They attend the weeklong celebration almost nightly to enjoy the different bands.

For Randy Giessler and his parents, its a sign of setting down roots. He said his parents have had 24 homes throughout the years. For him, Faith was his 14th and final.

“I think this one’s sticking,” he said, giving his wife and high school sweetheart a grin, “For some reason, I stayed down here.”

Still others enjoyed the tunes from the air-conditioned comfort of the Faith Soda Shop.

Carla Linker, in the restaurant with daughter Hailey Linker and 4-month-old grandson Westyn Reash, was just getting off work when she attended the dance.

She said she came every year.

“This is my first year not living here,” she said, explaining that she had recently moved to Salisbury following the passing of her mother.

Reash, with a gummy smile and excited, pedaling legs, was already enjoying the tunes filtering their way into the family-style restaurant.

He may not have had words, but his message was clear: his turn on the dance floor would come some day.

And he was ready.