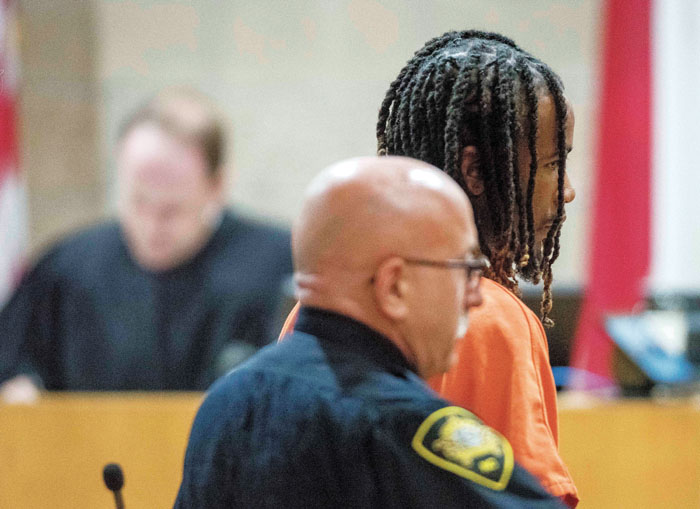 Witt Darnell Alexander was in court Monday morning for a first appearance. Alexander is charged with the murder of Mariah Turner. Jon C. Lakey/Salisbury Post

SALISBURY — As the man accused of killing 25-year-old Mariah Turner made his first appearance in court Monday, Rowan County authorities continued the investigation of what they called a random murder.

Rowan County Sheriff’s Office investigators said suspects arrived suddenly about 2 a.m. and tried to force their way into the home. Turner was shot after she tried to close the front door.

Deputies found Turner injured and began rendering aid to her as EMS crews arrived. Officials said Turner died of her injuries at the scene.

Someone fired multiple shots into the residence and Turner was struck. A few hours later, Rowan County authorities had arrested Witt Darnell Alexander Jr., 25. He was charged with first-degree murder, shooting into an occupied property and assault by pointing a gun.

Authorities say there was no relationship between Alexander and Turner.

“They did not know each other,” said Detective Chad Moose. “We don’t feel like she was a target.”

Detectives are working to identify other suspects and are looking for a car and a second person who was in the yard at the time of the shooting.

They believe that an earlier shooting in the 100 block of West 11th Street, not far from Sunday’s murder, could be connected.

The Salisbury Police Department responded to that incident, which was reported as a shooting into occupied property.

Margie Leach, a cousin of Turner, said Monday her death has been very hard on the family. Leach’s brother, Michael Faulk, was murdered a month ago.

She said they were “two sweet, loving and caring people who never bothered anyone.”

District Court Judge James Randolph said in court Monday that Alexander could face the death penalty for the first-degree murder charge. The maximum penalty for shooting into an occupied property is 19 and a half years, while the maximum sentence for assault by pointing a gun is about 12 and a half years.

Salisbury attorney Doug Smith was appointed as a provisional attorney to represent Alexander. A probable-cause hearing was scheduled for July 13.

Alexander remains in the Rowan County Detention Center without bond.

He has previous convictions for simple assault, felony common law robbery, felony possession of marijuana, credit card theft and obtaining property by false pretenses. He has a pending 2018 traffic infraction that with a July court date.

Town of Faith Street Dance fun for all ages