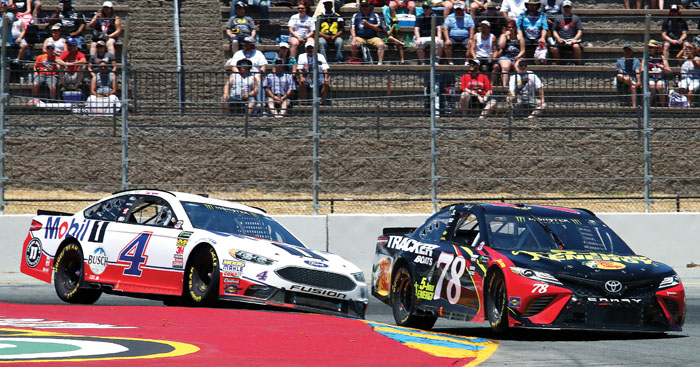 SONOMA, Calif. (AP) — Martin Truex Jr. was running second as the laps dwindled in Sonoma, and crew chief Cole Pearn didn’t think they were as fast as Kevin Harvick.

Pearn told his team to prepare for a pit stop on the 73rd lap, and he told Truex over the radio to bring in the car.

It was all trickery.

Harvick’s crew chief, Rodney Childers, called in his driver for tires and fuel in anticipation of Truex’s stop — but Pearn’s driver actually stayed out for seven more laps. When Truex finally pitted, he got the fresh tires he needed to blow past Harvick for a sweet victory.

“I called him off at the last second,” Pearn said with a sly smile. “As far as he knew, we were pitting. I’d like to say we’re smart enough to use codes, but we’re not. We’d probably mess it up.”

Truex won the NASCAR Cup Series race in Sonoma on Sunday because of that clever pit bluff, cruising to his second career victory on the challenging road course.

Truex easily held off Harvick for his second win in three weeks and his third victory of the season in his Furniture Row Racing Toyota. Truex led 62 laps and won by a whopping 10.513 seconds.

“The last 10 laps of the race were easy,” Truex said. “A little stressful. I was just hoping for no cautions, because I had a big lead. This place is so tricky and so technical, but when you start to take care of your equipment and have time to think, it’s almost harder. You can overshoot a corner easily.”

The defending Cup Series champion didn’t make a mistake after he waited to pit until the 81st lap, a full eight laps later than Harvick’s Stewart-Haas Racing Ford. With fresh tires, Truex passed Harvick for the lead around the final hairpin turn with 19 laps to go.

“That was all Cole,” Truex said. “I’ll do whatever he wants to do. Awesome job by him today. … Honestly, all you’re doing is begging, hoping that the caution doesn’t come out and hope the engine stays together.”

Truex’s victory in his manufacturer’s title race was the 18th of his career. He earned his second career victory at Sonoma in 2013 for Michael Waltrip Racing, making him the only racer to win twice in the past decade at Sonoma.

Cup Series leader Harvick went to the pits shortly after Truex passed him, but never got the caution that would have been necessary for him to catch up. Clint Bowyer finished third and Chase Elliott was fourth.

Truex began his racing career as a kid running go-karts on road courses, and those lifelong skills are showing. After winning at Watkins Glen last year and taking Sonoma this year, his three career road course victories are second among active drivers to the four wins on non-oval tracks by Kyle Busch, who finished fifth in Sonoma.

“I enjoy them,” Truex said. “I think it’s fun to do something different.”

Here are more things to know about the race in wine country:

Harvick wasn’t angry about the pit strategy that probably decided the race. “The call was one thing, but I think I was too hard on the car the first couple of stages,” Harvick said. “The brake pedal was long after qualifying and never really came around during the race. It progressively got worse.”

Pearn turned heads on pit row even before his strategy decisions thanks to a nasty-looking vertical scar running down his forehead. The crew chief said he needed stitches earlier in the week after he got hit in the face by a large corner post while building a treehouse for his family. The blow cut his forehead down to the skull — but he went home from the hospital and finished the treehouse anyway. “I wish I (had been) fighting a bear or a cougar, or something like that,” he said.

A.J. Allmendinger won the first stage and had dreams of getting a rare victory — until he missed a shift and blew his engine on the 33rd lap. Allmendinger is a standout road course racer, but he made a key mistake. “I haven’t missed a shift on a road course in 10 years,” Allmendinger said. “It was just me. I was trying to be so patient and so smooth. It was unexpected. It’s on me. I let everybody down here.”

Kyle Larson finished 14th after starting on the pole for the second consecutive year at his home track in his native Northern California. He lost several positions early when he couldn’t keep his rear end under control, but managed to keep it together for his second-best finish in five Cup Series races on the Sonoma course. He has never finished better than 12th.

The Sonoma race featured little of the contact and grinding damage that usually characterizes this 11-turn ordeal. Truex’s car had remarkably little damage, and the race’s only caution came after Allmendinger blew up. “I think the entire field is definitely better (at road racing),” the 37-year-old Truex said. “Just in general in stock car racing, you come up with more experience on road courses today than I did. All these kids have more experience at it. … Also here, we didn’t have a lot of cautions, and cautions breed cautions. Restarts are insane here.”