Legion Baseball: Owen, 3-run homers too much for Mocksville 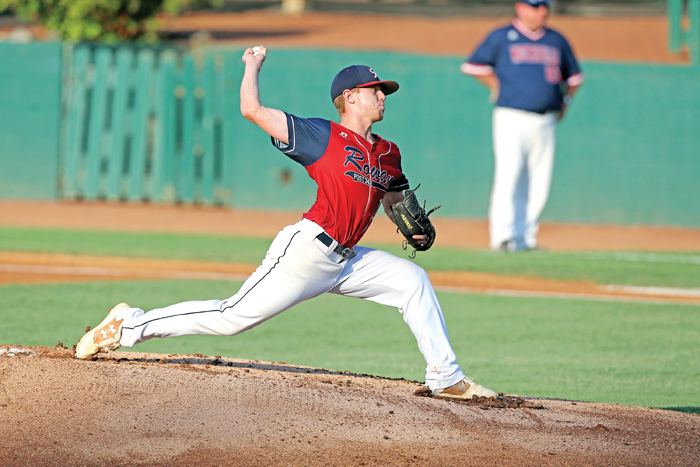 Rowan pitcher John Owen on the mound. Photo by James Sipes, for the Salisbury Post.

SALISBURY — “Johnny B. Goode” blared over the P.A. at Newman Park on Sunday night as John Owen took the mound, and, as is usually the case, Johnny was good.

Owen pitched six innings, struck out eight and walked one as Rowan took the Southern Division of Area III game with relative ease, 11-4.

“We lost at Mocksville in a wild seventh inning when we played there, so everyone was pumped up a little bit for this one,” Owen said. “Pregame we were a little bit scared about the weather, but it turned out to be a really beautiful night.”

Mocksville managed eight hits against Owen but didn’t square up many balls. Six of the visitor’s hits were bouncing singles that found holes. Owen, who has been around the longest of any of the Rowan players — this is his fourth Legion summer — exited with an 11-2 lead.

Owen was coming off perhaps the shortest start of his career, a two-inning effort in an ugly loss at Kannapolis on Thursday in which Rowan threw it around behind him. With Rowan down 5-0 in that one after two innings, Owen didn’t return to the mound after a weather delay. That turned out to be a prudent decision by the coaching staff. Rowan’s starting pitching isn’t deep, but Owen had two days of rest to get ready for Sunday’s rematch with Mocksville, and he and catcher Garrett Alewine got the job done.

Rowan’s offense was quiet early, but it erupted in a seven-run fifth. Luke Barringer and Hayden Setzer, who was celebrating his 19th birthday, powered three-run blasts in that inning.

Owen enjoyed a 1-2-3 first inning, but Mocksville bunched four singles in the second for a 2-0 lead. Patrick Usher (3-for-3) and No. 9 batter Brandon Gregory drove in runs.

“We got down, 2-0, but I wasn’t worried about two runs,” Owen said. “There was a lot of game left, and I knew we were going to bring some offense.”

Bryson Wagner’s two-out double in the bottom of the second against Mocksville starter David Highman plated Barringer and cut Rowan’s deficit to 2-1.

“A lot of us (Rowan’s players from Carson, West and East Rowan) saw that pitcher in high school throwing for North Iredell,” Barringer said. “He was tough to hit in high school and I thought he was throwing very well again tonight.”

Rowan took the lead for good in the bottom of the third. Lead-off man Setzer walked and scored the tying run on a laser double to the center-field wall by Clayton Gilmore. Gilmore kept going to third on a tardy throw to the plate. When Gilmore scored on a wild pitch, Rowan was up, 3-2.

Owen handled Mocksville (10-10, 3-4) easily in the fourth. Then Highman survived two walks in the bottom of the inning. He got Gilmore to fly out deep to center for the third out and kept Mocksville’s deficit at one run.

In the next inning, Owen retired Mocksville’s lead-off batter for the fifth straight time and put up another zero.

“Mocksville had a really good plan against John early in the game,” Rowan head coach Jim Gantt said. “They know John very well and they know he throws a lot of fastballs. They were looking for fastballs and staying up the middle, and they were finding holes. But when he started mixing in the curveballs, he was tougher to hit. He started getting some swings and misses.”

Highman had pitched craftily and effectively for four innings, but in heat that topped 90 degrees he was tiring in the fifth. Walks to Trevor Atwood and Wayne Mize prompted a mound visit from Mocksville coach Charles Kurfees.

Kurfees stuck with Highman. Barringer stepped into the box.

Highman got his first pitch past Barringer, but the 6-foot-5 masher sent the next one crashing high off the scoreboard in left-center for a three-run homer, his fourth of the summer but his first since June 5.

“That first pitch he threw, I thought I was right on it, but I missed it,” Barringer said. “I guess maybe it was a little high and I swung right under it. But the next pitch, it was right there. I didn’t swing all that hard, but I got it right on the sweet spot. I got that one pretty good.”

“Mocksville had more hits than we did tonight,” Gantt said. “But those three-run homers help. We had a lot of walks and we had timely hits once we got guys on base.”

Highman issued another walk and his night on the mound was over.

As the big inning continued against Mocksville’s bullpen, Alewine whacked a run-scoring double to push the lead to 7-2. Then, with Alewine and Cameron Graham on base, Setzer destroyed a pitch over the center-field wall for another three-run shot, his team-leading fifth homer and a 10-2 cushion.

Rowan’s final run came in the sixth when Barringer walked and made his way around the bases. He dashed home on a wild pitch, his third run of the night, and Rowan led 11-2.

Barringer still can use a little polish, but his raw tools — size, speed and power — are impressive. Gantt said the rising senior at Carson can become a serious prospect.

After Gilmore ran into trouble trying to close things out in the seventh, including Drew Martin’s two-run homer to left, Maddux Holhouser nailed down the last three outs.

“Everybody had a job to do and we did those jobs tonight,” Setzer summer up. “And John Owen was good.”

NOTES: Concord’s 14-5 win against frontrunner Kannapolis on Sunday nudged Rowan back into the Southern Division of Area III race. … Rowan is dealing with a virus. First baseman Chandler Lippard was out Sunday, with Holshouser starting at first base. Gantt said a half-dozen players and coaches are under the weather, including Daniel Durham, the probable starter for Wednesday’s home game with Kannapolis. … Rowan had planned to practice today, but will take the day off instead to try to get healthier. … Holshouser, still seeking his first win of the summer, is the probable pitcher for Tuesday’s division game at Stanly County.