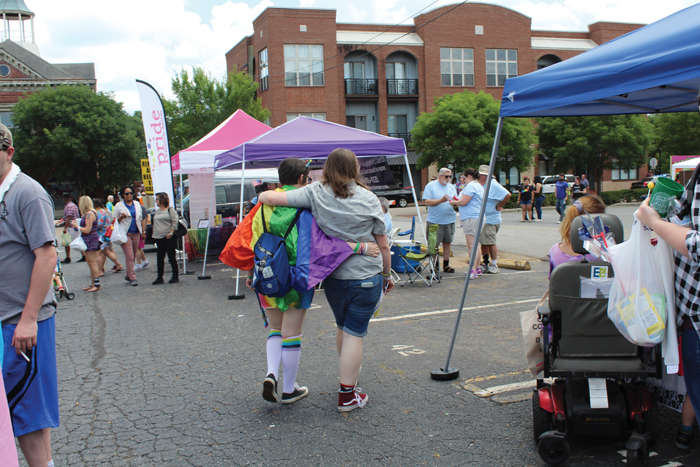 Andie Foley / Salisbury Post - Rainbows and pride flags abound at the Salisbury Pride Festival, with many of the latter worn as capes.

Uneventful in that the crowds of attendees were large, the groups of protesters slim and the environment warm and welcoming for all, she said.

“I think it’s our most successful, our most attended yet,” she said.

She said that Salisbury Pride always strives to make the event all about embracing differences and inclusiveness.

“We just have a great time and we see so many people here from all walks of life,” she said. “There’s probably just as many straight people here as there are lesbian, gay or transgender. It’s a very good mix and it makes us feel good because it means what we’re doing is working.”

For the festival, now in its eighth year, things haven’t always been smooth sailing.

Many protested the event and raised concerns after its first occurrence in 2011. Debate arose afterward about whether the event would be able to continue.

“We were just going to do one year. We expected 500 people to show up. Then 2,500 people showed up,” said Meadows. “We saw how much we really needed this in the community. … It’s a passion of mine now that we have to continue to make it better every year.”

People like then-mayor pro tem Maggie Blackwell helped Salisbury Pride in its effort to return the festival to East Fisher and South Lee streets each year.

On behalf of Pride, Blackwell met with the police and fire departments, city agencies, employees and fellow council members.

Blackwell was honored for her efforts during Saturday’s activities with the Ralph Ketner Ally Award.

“She made sure that they understood that we had personal rights and we had freedoms that we needed to be able to express, just like anybody else did,” said Meadows. “She changed hearts and minds to make sure that today, in 2018, we’re still here celebrating Salisbury Pride.”

Tricia Lea Douglas was honored with this year’s Volunteer of the Year Award.

“Tricia has been a volunteer with Pride since the very beginning. She has to take a train to get here, so she’s got to make an effort to be here,” said Meadows. “… That’s just the type of volunteer this gal is and we need more like her.”

Blackwell extended a special shout out to Mayor Al Heggins, whom she said was the first Salisbury mayor in the history of the festival to deliver her own proclamation.

After delivering her proclamation and welcoming crowds, Heggins also volunteered as a ‘peacekeeper,’ one of many volunteers making sure that hostility didn’t arise between attendees and a smattering of protestors.

Meadows said peacekeepers and other Pride festival workers try to be good neighbors with those who come to voice disapproval. They offer water to adults and children, though it’s seldom taken, she said.

This year, a peacekeeper walked alongside a man holding a sign that read “He who sins is a slave to sin,” the effort to prevent confrontation.