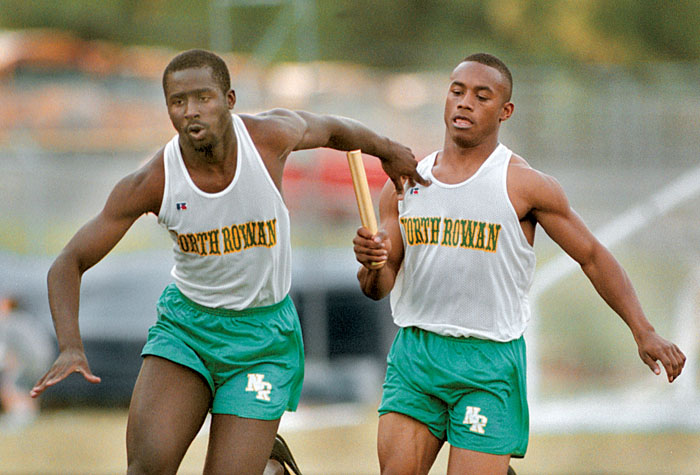 SPENCER — A doting dad with three school-age daughters, coach Lamar Wilkerson looks at his new job as adding another two dozen girls to his family.

Wilkerson has been hired to lead the North Rowan girls basketball program. Ben Hampton, North’s athletic director, made the official announcement on Thursday.

Wilkerson has had Cavalier green in his bloodstream a long time. A member of North Rowan’s Class of 1999, Wilkerson’s high school days were spent during a golden era for athletics in Spencer in which the Cavaliers were competing in the 2A Central Carolina Conference with rival Salisbury, North Stanly, Lexington, East Davidson and regional powerhouses Ledford and High Point Central.

Wilkerson was a smart, out-going student, one of North’s three Boys State representatives, the vice president of the student council, and the homecoming king.

On the football field, he was one of the smaller guys on a team with some monsters, but he was a quality defensive back.

“North had so many great athletes in those days when we were known as ‘The Aiport,'” Wilkerson said. “Jeff Chambers, Greg Yeldell, Mario Sturdivant, Alfonzo Miller, and on and on. “I was fortunate to have great high school coaches. Robert Steele was the defensive coordinator for the football team. Roger Secreast was the head football coach, and I had position coaches like Bill Kesler and Chris Sifford.”

Wilkerson also enjoyed success competing in track and field. Those were days in which coach Steele’s teams won the 2A state title just about every year. The Cavaliers took the crown three times during Wilkerson’s high school days.

Wilkerson went on to Winston-Salem State University to continue his education and was on the football team for three seasons. He was a member of CIAA championship clubs coached by Kermit Blount.

Wilkerson’s dream after college was to coach football.

At Parkland, Wilkerson spent many years working under head coach Dee Bell, learning lessons from early success as well as from later struggles. At Parkland, Wilkerson was the position coach for Doug Middleton, a safety who excelled at Appalachian State and made it to the NFL with the New York Jets.

In 2014, he became a P.E. teacher at Wiley Middle School, a new magnet school program in Winston-Salem. It was there he experienced a lot of important firsts — coaching middle school youngsters, coaching girls, coaching basketball.

He liked all of it.

When an opportunity to teach P.E. and coach at North Rowan Middle was offered by North Community Principal Alexis Cowan several years ago, Wilkerson jumped at it.

“I’d been driving to work in Winston-Salem for 14 years,” Wilkerson said. “It was just time to work closer to home, and it was a great move as far my family time. We’re a close family, and taking the job at North Rowan Middle gave me a lot more time with my wife and daughters. I just didn’t want to miss any more of that time.”

Wilkerson’s oldest daughter will be a freshman at North Rowan High this year. The younger girls are a first-grader and a fifth-grader.

While he’ll be coaching at North Rowan High, Wilkerson will continue to teach at North Middle.

His first phone calls, after being hired as the new varsity head coach were to coaching mentors.

“I learned something from every coach I had,” Wilkerson said. “And when you’re a coach, you never stop learning. You learn every day.”

Wilkerson has gained in basketball knowledge in recent years, not only at North Middle, but with the Rowan Hurricanes AAU program.

“Lamar is a North Rowan guy, he’s great working with kids, and he’s got a strong coaching background,” Hampton said. “All the different experiences he has are a bonus for us. As big a background as he has in football, we’re not going to ask him for help on the football staff. We want him to be able to put all his energy and all his focus into getting our girls basketball program to a level where we all want it to be.”

Wilkerson will be assisted by Anthia Smith, a Hanford-Dole Elementary School teacher who was a basketball standout in Elmira, N.Y., and at Long Island University Post.

North’s girls were very good (19-8) as recently as the 2015-16 season. That was the last season for coach Brian Lytton. It was also the last year for standout players Aliyah Farmer and Special Washington, who combined for more than 2,000 career points.

Coach Ron Bost faced tough times the last two seasons, with an inexperienced roster that was depleted by injuries. North was 4-18 in 2016-17.  It didn’t help the Cavaliers that at a time when they were down, Carson, West Rowan, South Rowan and Salisbury were blessed with some of the best players in school history. North beat Davie County last year but went 0-5 against Rowan opponents in the last two Christmas tournaments.

North bottomed out and turned the corner, to some extent, under Bost’s direction last winter. It was beneficial that the Cavaliers moved down from 2A to 1A. North scored a little more, improved its defense by 11 points per game, and  finished 7-17.  North’s two best scorers — Natavia Taborn and Makiya McDaniel — were freshmen. They looked like building blocks for the future.

“We do have good young players and we’ve got girls coming over from the middle school who are going to be good,”  Wilkerson said. “But we’re also going to need those older players this season. We’re going to need our seniors to lead us if we’re going to get this program all the way back. We’re not looking to tear anything down. We want to build things up.”

Wilkerson has been encouraged by how many hours the Cavaliers are spending in the gym and the work ethic they’ve displayed.

The county will be tough again, but in the 1A Yadkin Valley Conference, North is capable of being the surprise team.