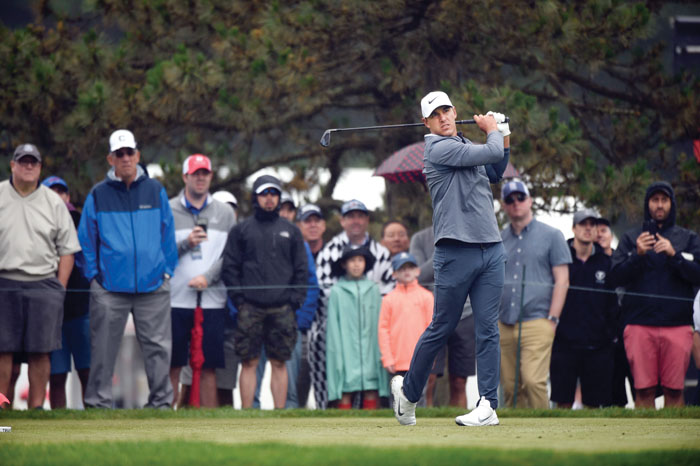 US Open champion Brooks Koepka watches his tee shot on the fifth hole during the third round of the Travelers golf Championship at TPC River Highlands in Cromwell, Conn., Saturday, June 23, 2018. (John Woike/Hartford Courant via AP)

CROMWELL, Conn. (AP) — Paul Casey has come close each of the three previous times he has played in Connecticut. He has a great chance to break through Sunday in the Travelers Championship.

Casey shot an 8-under 62 on Saturday to take a four-stroke lead into the final round.

Casey, whose win at Valspar in Florida in March was his first PGA Tour title in nine years, called the bogey-free round at TPC River Highlands his best of the year.

The Englishman had six birdies and an eagle — at the signature par-4 15th hole — where he hit his tee shot onto the green and then sank a 23-foot putt. He broke out of the pack hitting all 18 greens and has a streak of 23 straight heading into Sunday. He was at 16-under 194.

“It was clinical,” he said. “I did everything I wanted to do. I can’t do any more than that.”

Casey was second here during his first visit in 2015, came in 17th a year later and had a fifth-place finish in Cromwell a year ago.

“I love this golf course,” he said.

“I think I can shoot a low number on this course,” Henley said. “You’ve got to make the putts. I’m definitely hitting it well enough, and if I can get a couple putts to fall, that would be good. But I can’t control what (Casey) is doing. I can just try to keep playing solid.”

Watson would join Billy Casper as the only players to win this tournament more than twice. Casper won his fourth Connecticut title in 1973.

“I’m hoping the weather is real sunny when I’m teeing off and as soon as I putt out it gets windy and a little be of rain and gives me a better shot at it,” he said.

Morning rain and drizzle throughout the day kept the greens soft, but nobody was able to stay with Casey.

The shot of the day came from James Hahn, who aced the 154-yard 11th hole.  Hahn’s tee shot went over the greenside bunker on the right front of the hole, struck the bottom of the flag pole and went into the hole, which required some repair work to the front lip after taking the hit.

“Sorry, not sorry,” joked Hahn, who said this was the sixth or seventh ace of his lifetime, but the first on Tour.

U.S. Open champion Brooks Koepka shot a 69 to get to 4 under. Koepka said he plans to go right at every pin Sunday, then take time off from golf before the British Open.

It was a bit of a squirrely round, quite literally for Rory McIlroy.

His opening tee shot was delayed when a squirrel camped right in front of him in the tee box. McIlroy finally got the shot off, hitting it wide right and into the rough en route to a bogey.

ROGERS, Ark. (AP) — Since its first year on the LPGA Tour in 2007, the crowds at the NW Arkansas Championship have belonged to Stacy Lewis.

Another former University of Arkansas star staked her claim as the hometown favorite Friday when Gaby Lopez shot a career-low 8-under 63 to take the first-round lead at Pinnacle Country Club.

Like Lewis, the two-time winner of the tournament, Lopez starred as a three-time All-American for the Razorbacks before joining the LPGA Tour in 2016. Despite flashes of potential, Lopez had yet to join Lewis among the ranks of the world’s best — missing the cut in her last two tournaments and entering this week ranked 136th in the world.

For a day, at least, the Mexican standout felt right at home atop the leaderboard in her adopted home state.

“I feel like home,” Lopez said. “I feel so, so comfortable out here, because I feel that everyone and every single person out here is just rooting for us.”

Moriya Jutanugarn was a stroke back along with Minjee Lee, Catriona Matthew, Nasa Hataoka, Lizette Salas, Mirim Lee and Aditi Ashok. Six others finished at 6 under on a day when only 26 of the 144 players finished over par, thanks to some mid-week rain that softened the greens and calm skies throughout the day.

Jutanugarn finished second at the tournament last year and is trying to win for the second time on the LPGA Tour this year. Her younger sister, Ariya, is already a two-time winner this year and shot an opening-round 66.

Defending champion So Yeon Ryu, coming off a victory Sunday in Michigan, shot a 67.

Friday was Lopez’s long-awaited day to standout, though, much to the delight of the pro-Arkansas crowd.

After missing the cut her last two times out, Lopez took some time off and returned home to Mexico City to rest her mind and work on her game. The work paid off with two straight birdies to open her round and a 6-under 30 on her front nine.

Lopez needed only 25 putts and finished two shots off the course record of 61, and she overcame a poor drive on the par-5 18th to finish with a par and keep her place at the top of the leaderboard.  Her previous low score was a 64 last year, and she matched her career best by finishing at 8 under.

“(Rest) is a key that no one really truly understands until you’re out here,” Lopez said. “… Sometimes resting is actually the part you’ve got to work on.”