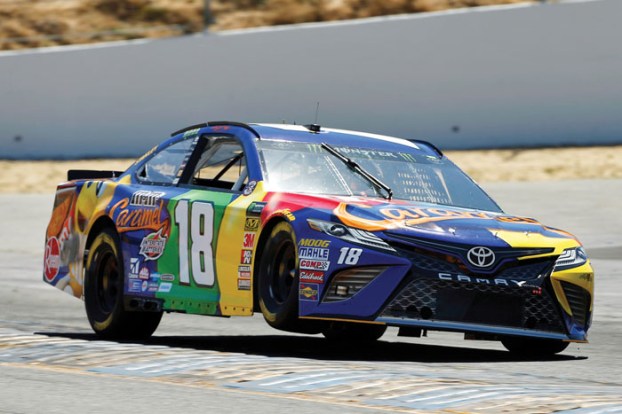 SONOMA, Calif. (AP) — William Byron recently got instruction on the finer points of road racing from two coaches. He also used a simulator, did countless hours of study and drove Saturday in the K&N Pro Series race to prepare for his first NASCAR Cup Series race at Sonoma Raceway.

“I feel like I’ve made some good progress on the road courses this year,” Byron said after finishing third in the K&N race.

The 20-year-old rookie still realizes that nothing substitutes for experience on the winding turns and changing elevation of this unique track. Even then, it’s awfully difficult for any oval-centric driver to sustain any career success in a race that hasn’t had a repeat winner since 2000.

Byron is a quick study, though: He qualified in eighth in his Hendrick Motorsports Chevrolet on Saturday, putting himself in position to be a player Sunday in a race that nearly anybody can win.

“(On Friday) I really started getting my rhythm of what I needed to do better,” Byron said. “I kind of put that all together (Saturday) to try to get where we need to be. It was a lot of fun. I really enjoyed it. It was cool.”

Sonoma is a highly enjoyable stop on the Cup circuit for most of the drivers, but it’s even more fun for their families and sponsors, who flock to Northern California for a pleasant weekend. The area’s gracious vibe contrasts sharply with the difficult racing for drivers on a circuit with only three non-oval courses on its schedule.

“These are the types of events where, honestly, nobody cares about the race except us,” Kevin Harvick said. “Everybody has a hell of a time when they come to Sonoma, because they can bring their wife, bring their friends, and the sponsors all come and we have big events. It could be the best race you’ve ever seen at Sonoma or the worst race, but everybody is going to have a great time.”

Byron isn’t the only driver doing extra preparation for those sharp turns, though. Aric Almirola has struggled mightily on road courses throughout his career, and he never finished better than 14th in six career starts at Sonoma. He has rededicated himself to learning the skill for Stewart-Haas Racing.

“Road racing was never something that I looked forward to,” said Almirola, who qualified in 24th on Saturday. “Always something I just marked on my calendar that I had to go do, and I just wanted to minimize risk. This year, I don’t want to be a weak link. I put a tremendous amount of work in the simulator. I wanted to enter this race to get laps and be more prepared.”

Sonoma hasn’t had a repeat winner since Jeff Gordon — a native of nearby Vallejo — won three straight from 1998-2000. The Cup race has had nine different winners in the last nine years alone, with Harvick claiming it last year.

“I think you will see a repeat winner this time,” said a grinning Harvick, who will start sixth.

More things to watch before the winner drinks wine from the oversized glass chalice:

KYLE UP FRONT: Northern California’s own Kyle Larson starts from the pole for the second consecutive year after topping qualifying. He finished 26th last year after that impressive start, but Larson sounds more confident about his Chip Ganassi Racing car’s ability to maintain strong form this year. Larson believes his background in sprint car racing actually helps him on road courses because he knows how to rely on his car’s suspension in different ways than most NASCAR drivers.

TRUEX’S TURN?: Defending Cup Series champion Martin Truex Jr. starts on the front row. After winning the 2013 race in Sonoma and showing above-average road course racing skills over the years, he has a chance to end the track’s string of nine consecutive different winners. Yet even with that win, his average career finish on this track is 21st.

BUSCH COUNTRY: Current Cup points leader Kyle Busch won here in 2008 and again in 2015 on the way to his series championship. He has already won four times this season, and he qualified in ninth on Saturday in Sonoma. His brother, Kurt, is an accomplished road racer who won here in 2011 and has led 197 laps at Sonoma — the most among the current field — in 17 career starts.

BAYNE IS BACK: Trevor Bayne will return from a five-race absence behind the wheel of his Roush Fenway Racing Ford. Bayne qualified at a solid 13th on Saturday. He is sharing his seat with Matt Kenseth, who didn’t finish higher than 13th in his four starts during Bayne’s benching. Bayne also will drive next weekend at Chicagoland.