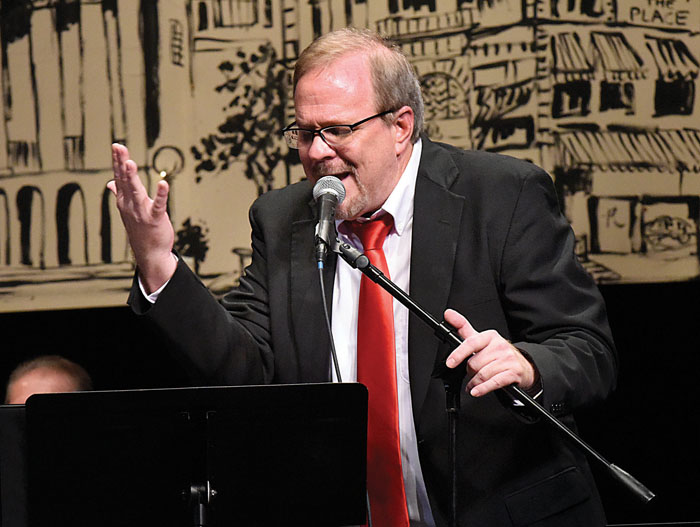 Kent Bernhardt in the 'Bury Home Companion. photo by Wayne Hinshaw, for the Salisbury Post

If you’re looking for a season of great performances, check out the Salisbury Symphony’s 2018-2019 season.
“Great Performances” is the theme of the season, which features five symphony concerts.
The season kicks off with a fundraiser, “A ’Bury Home Companion.” This wildly successful event — modeled on the format of a live radio show — brings loads of local talent to the Meroney Theater stage. The fundraiser expands to two performances this year — at 2:30 p.m. and 7:30 p.m. on Saturday, Aug. 25.
“We got a really good response last year,” says Kent Bernhardt, co-producer of the show with Kay Peeler. He writes the script and rehearses the radio actors, and she coordinates the musical talent. Attendees to last year’s show will be thrilled to know that young musicians Eli Yacinthe and Sarah Claire King, who brought down the house, are returning. 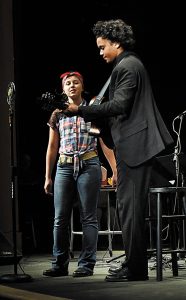 “They were just incredible,” Bernhardt notes.
Bernhardt promises another evening of incredible talent and gentle humor. Read more about this fundraiser in the August issue of Salisbury the Magazine.
Now, let’s hear about the symphony’s regular season.

“Americana” begins the season at 7:30 p.m. Saturday, Oct. 6, in Catawba College’s Keppel Auditorium. The concert opens with “Fanfare for the Common Man” by Aaron Copland. The first half of the concert will feature pieces based on the texts of three American poets.
“I Hear America Singing” by Robert Maggio is based on the poem “I Hear America Singing,” by Walt Whitman. The Salisbury Symphony Chorale is featured in this selection.
The Salisbury Symphony Chorale will sing during the “Americana” Symphony by Mark O’Connor of Lake Norman. It’s a cross between folk and classical music, notes Maestro David Hagy.
Four poems from Robert Frost’s “Frostiana series,” including “The Road Not Taken,” “A Girl’s Garden,” “Stopping by Woods on a Snowy Evening,” and “Choose Something Like a Star” are set to music by Randall Thompson. Hunter Safrit, office administrator who is studying to be a conductor, will conduct the chorale during this segment.
Another poet featured is James Agee in Samuel Barber’s “Knoxville: Summer of 1915.”
“It’s one of the most gorgeous Samuel Barber pieces,” Hagy says. The poem tells the story of a young child in the South, around age 3, exploring his identity, surrounded by family at a picnic. Anyee Farrar is soprano soloist. 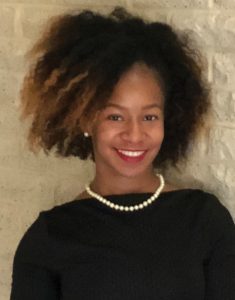 The symphony is taking a break from this year’s Big Band Bash. Hagy says the organization is exploring other fundraiser ideas. To bring jazz of the 17-piece Salisbury Symphony Big Band to a larger audience, “Jazz Night” is set for 7:30 p.m. Saturday, Nov. 10, in Livingstone College’s Varick Auditorium. The Livingstone Jazz Band will collaborate with the Big Band. Hagy says that the Big Band’s Wally West, tenor sax, Jack Murray, alto sax, and Jay Meachum, trumpet, are “enormously skilled at improv.”

Speaking of enormous skills, the symphony continues its long partnership with Piedmont Dance Theatre in the beloved holiday favorite, “The Nutcracker,” with performances at 6:30 p.m. Saturday, Dec. 15, and 2:30 p.m. Sunday, Dec. 16, in Keppel.

“Stars” is the theme of the family concert at 4 p.m. Sunday, Jan. 27, 2019, in Keppel. Not only will the concert carry an outer space theme with Johns Adams’ “Short Ride in a Fast Machine,” “Blast Off!” by Daniel Dorff and John Williams’ “Star Wars: The Last Jedi,” you’ll see local “stars,” including the All-County Fifth Grade Honors Chorus and young musicians. The Chorale will sing as part of Haydn’s “The Heavens are Telling” from the “Creation” oratorio.

“A Pure and Noble Spirit” is the title of the March 23 concert, set for 7:30 p.m. at Keppel. Hagy pulled the title from Prokofiev’s Fifth Symphony, written in Russia in 1944. Also on the program are Mozart’s Overture to “The Magic Flute,” and the return of pianist Solomon Eichner of Raleigh for Mendelssohn’s First Piano Concerto. Eichner gained a local following last year during a performance for the English-Speaking Union. 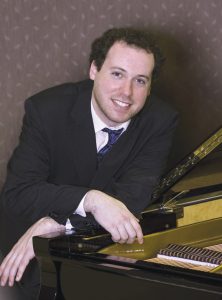 A first-ever collaboration with local musician Darrell Harwood in May drew the symphony’s largest audience last season. Hagy is creating a similar concert this year with Matthew Weaver and Friends at 7:30 p.m. Saturday, May 4, 2019, in Keppel. The symphony will perform a concert of Appalachian mountain music, and then draw from Weaver’s extensive repertoire with the second half of the show. John Stafford will again orchestrate pieces for this unique performance.
Hagy points out, “Not only is Matthew an accomplished musician, he is also a leading expert in Appalachian mountain music.”

The season concludes with Pops at the Post at sunset on Saturday, June 1, 2019, in Downtown Salisbury.