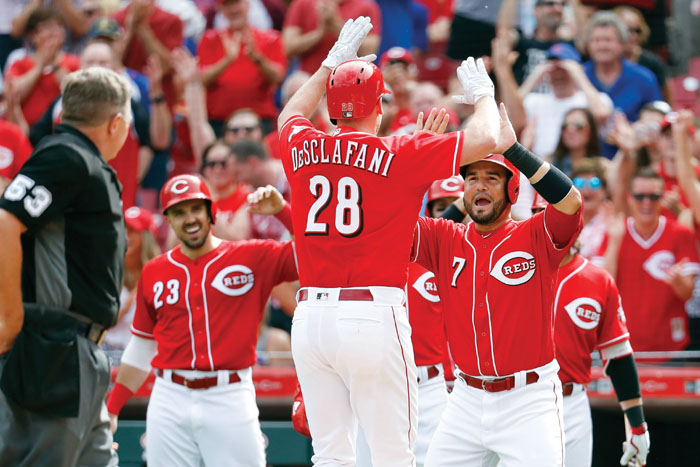 Adames had an RBI single during a two-run second and added a solo homer in the seventh off Sonny Gray (5-5).

The Rays have won the first two of a three-game series against the Yankees, who have the best record in the majors.

New York (50-24), coming off a three-game sweep over Seattle, is the only team in the big leagues not to have dropped more than two straight games this year. This is the latest the Yankees have gone into a season without losing three in a row since August 1954.

It was Cincinnati’s third slam in five days and major league-leading seventh of the season, two short of the record set in 2002. The last Reds pitcher to hit a grand slam was Bob Purkey against the Cubs on Aug. 1, 1959. DeSclafani (3-1) also pitched a season-high 6 1/3 innings and allowed three hits, struck out three and walked four.

Tucker Barnhart and Joey Votto also went deep in front of a crowd of 36,818, Cincinnati’s largest since opening day. Votto hit a three-run shot off backup catcher Chris Gimenez in the eighth.

Delino DeShields had two hits and drove in two runs for the Rangers, who have won a season-high seven in a row.

Eddie Rosario homered and drove in four runs, while Logan Morrison also homered and Mitch Garver had three hits for the Twins, who have lost three straight.

Gallardo (1-0) entered with a 15.95 ERA and made his second start for Texas after opening the year with Cincinnati. He fell behind 2-0 just five pitches into the game on Rosario’s homer before turning it around and pitching into the sixth.

Dylan Bundy (6-7) allowed two runs and seven hits in 6 1/3 innings while improving to 3-0 in June. One day after allowing four runs and recording only one out, Zach Britton pitched around a one-out walk to Johan Camargo in the ninth to earn his first save.

Trumbo’s homer was his fourth in his last six games. He has seven homers this season after missing April with a right quad strain.

Nick Markakis, who spent his first nine seasons with Baltimore, drove in three runs for Atlanta, including a two-run double off Donnie Hart in the seventh.

MILWAUKEE (AP) — Yadier Molina homered twice to back a strong start by Miles Mikolas and lift the St. Louis Cardinals to a victory.

CLEVELAND (AP) — Trevor Bauer struck out 11 over 6 1/3 innings to beat Detroit for the fourth time this season, leading the Indians past the Tigers for their sixth straight win overall.

Odubel Herrera, who had homered in five straight games, went 0 for 4.

Anthony Rendon homered for Washington, which has lost three of four.

Seranthony Dominguez worked the ninth for his fourth save.

Brandon Belt singled twice and Gorkys Hernandez added an RBI double as the Giants won their fifth in seven games.

Crawford went into the game mired in an 0-for-18 funk. He walked in the second, hit a triple off Matt Strahm in the fourth and doubled in a pair of runs off Adam Cimber (3-4) in the sixth. Crawford also doubled and scored in the eighth. San Francisco’s Gold Glove-winning shortstop also helped turn three of the Giants’ four double plays. He made a throwing error in the ninth that allowed a run to score.

Hunter Renfroe homered for San Diego, which has dropped six of seven.