Clyde, Time Was: We didn’t care about the birds and the bees 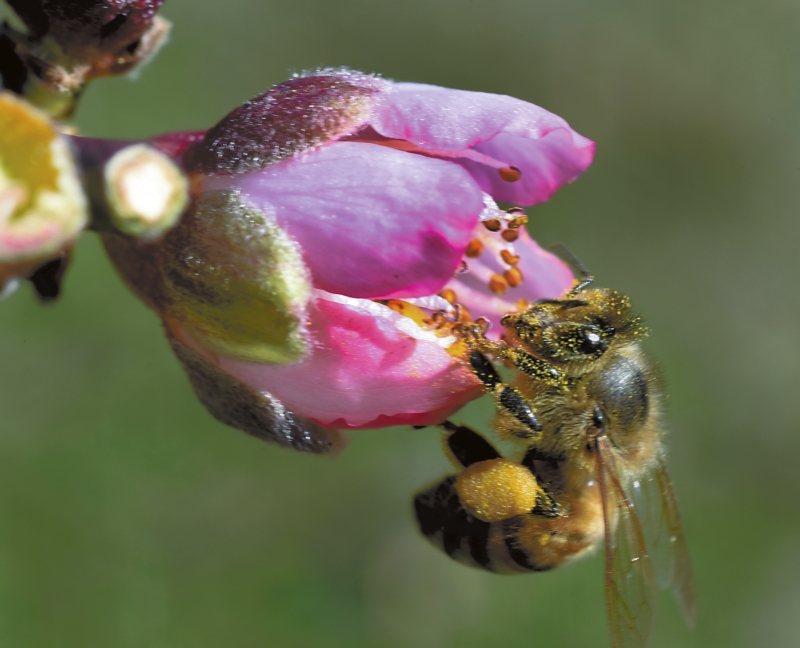 A honeybee gathers pollen from a peach bloom The yellow round ball like shape on her hind leg is pollen. Wayne Hinshaw/for the Salisburu Post

Time was, we didn’t know about the birds and the bees. They were there, all around us, but we never knew how crucial they were for the perpetuation of the human race. They survived with no help from manmade chemicals, highways to shopping heaven or better ideas on how to build houses for them.

Contrary to popular belief, careful handling of eggs and nestings does not harm birds. “Free as a bird” would be more meaningful to a prisoner. No boundaries, regulations, rules, limits, worry or punishment. No wonder they sing all the time, inspiring every poem and “Sunny Rhymes for Happy Children” — “Little birdies twitter, twatter, cheery chirp and trill and chatter.”

“The little chatterin’ sassy wren, no bigger’n my thumb,” wrote Darius Green. Why do females lack the male’s iridescent plumage? So they can buy make-up. No glitter, please. And those handsome, pretty males “may pair with one female for part of the season to raise a brood, then mate with a different female to raise a second or third brood, some have been known to have two mates simultaneously.”

Birds of a feather flock together. Look it up.

The Rowan Public Library is extremely fortunate to have two complete folios of Mark Catesby prints from Archibald Craige’s collection. A naturalist in the early 18th century, he documented the flora and fauna of the New World in 1712-1722. You can see them in real life on the third floor or digitally, which is the only way most of us will even see a bird or a bee in the future world.

Humming birds, who flap their wings about 80 times per second, go into a torpor when they sleep with a heart rate of 50 beats per minute and they snore when they are not humming around. Don’t put red dye in the water.

One Eugene Scheifflin introduced 100 starlings into Central Park in 1890. Now we have 200-plus million. Finally, something to thank Yankees for.

The Algonquin once said that bluebirds carry the earth on their breasts and the sky on their backs. Alas, the lament of the lonesome whippoorwill along Sherrills Ford Road has been drowned out by traffic, and the killdeer has been silenced by confrontations on Boundary street.

The constant drone of the interstate has replaced the drone of the “bumblebees come bumbling, buzzing, humming, mumbling.” In the bee world,  the queen lays all the eggs and mothers all the young, while every father-bee that’s hatched is nothing but a drone.” She is in charge of the hive of activity.

We hatched up out own theory of where the birds and bees answers came from. The stark arrived one day, or we were found in the cabbage patch. Books with pictures were helpful. Finally, the truth came out. “That stupendous canopy of Corinthian brass, it consists of four wreathed columns encircled with vines on which hang little putti, birds and bees.” — Diary of John Evelyn 1544.

We saw the light coming through the woods. Too busy to know or care, it was not freely on display and we did not have to delete it every second. We had good manners and good taste before the internet made us rude and crude and took away our imaginations. The only difference we saw, was like indoor and outdoor plumbing. If it worked don’t fix it, was the only advice we got from old-timers, who obviously had tried it.

We knew a spoonful of honey made the medicine go down, but where did we go to find the honeypot? Lust was not a four-letter word, Jimmie. “More to be desired are they than gold, yea, than much fine gold; sweeter also than honey and the honeycomb.” — Psalm 19:10.

So, have a little taste or spread it on thick. Listen to the mockingbird;  he repeats what he has heard, from other generations and those yet to come. Be as happy as a lark, but don’t get stung by the barb of a bee in the process. If you are a pigeon, go find a monument to sit on.

“Hail to thee, blithe spirit! Bird that never went, that from heaven, or near it, pour thy full heart, in profuse strains of unpremeditated art.” — Percy Shelley.