Belgium looks best yet at World Cup after rout 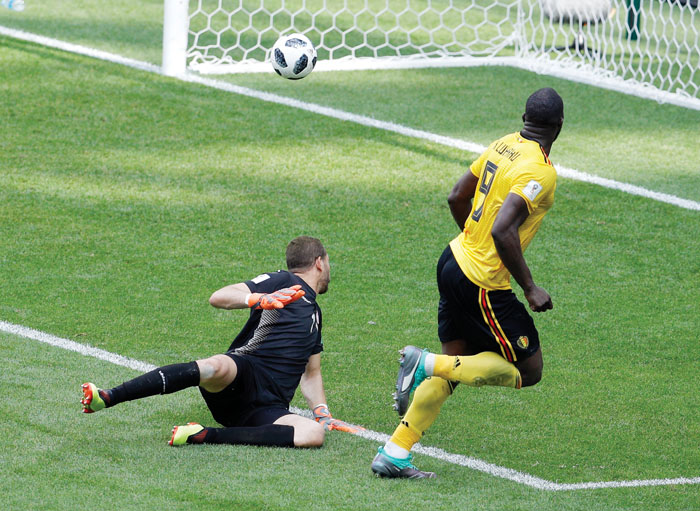 MOSCOW (AP) — Belgium seems to be getting better and better — maybe even the best yet at the World Cup.

It’s still early, but a hugely talented Belgian squad made a big statement on Saturday in its 5-2 rout of Tunisia. No team has scored more goals than Belgium’s eight, and only Cristiano Ronaldo can match Romelu Lukaku’s tally of four.

Belgium has yet to face South American or European opposition, however, and playing England on Thursday should decide who advances to the round of 16 as the winner of Group H.

“In the end, we need to play better teams and have better focus,” said Lukaku, who has scored two goals in each of Belgium’s two victories.

No player has had back-to-back World Cup games like that since Diego Maradona in 1986, though Argentina’s iconic captain did it in the quarterfinals and semifinals — against Belgium — before lifting the trophy.

Though Belgium is a long way from a first World Cup title, it is has looked like the most complete attacking force in Russia.

On Saturday, Eden Hazard also scored twice in the dominant display that produced the highest scoring game of tournament.

It could have been more. After replacing Hazard in the 68th minute, substitute Michy Batshuayi had several good chances before scoring one in the 90th.

“I think the whole of Belgium should celebrate,” said coach Roberto Martinez, who has overseen a 21-game unbeaten run since losing to his native Spain in his first game in charge in September 2016.

If Belgium had one worry, though, it was allowing Tunisia to quickly score after extending its lead. The tenacious North Africans also got five of their 15 shots on target.

The Belgians were rampant at times and had the luxury of taking off Lukaku and Hazard early in the second half to nurse injury concerns. Martinez said Lukaku had pain in his right ankle and Hazard hurt a calf muscle. Still, it could suit the coach to rotate his lineup against England with more decisive games ahead.

“In a tournament like the World Cup you’re only as good as the 23 players, so there will be opportunities for the other players,” Martinez said.

Slow starters against Panama, Belgium got things done early on Saturday despite the warm conditions at Spartak Stadium. Hazard scored with a sixth-minute penalty kick he earned by being tripped, and Lukaku angled a low, left-foot shot into the corner of Tunisia’s goal in the 16th.

“We knew that if we scored early, the game would be easy,” Hazard said. “So after five minutes we scored, and we controlled the game.”

The Tunisians cut the lead when defender Dylan Bronn headed in a goal in the 18th minute, but Belgium wasn’t done.

Lukaku clipped a right-foot shot over advancing goalkeeper Farouk Ben Mustapha in first-half stoppage time. Hazard then ran on to a long pass in the 51st, flicked the ball around Ben Mustapha and shot into an empty net.

Tunisia captain Wahbi Khazri then scored with almost the last kick of the match.

Belgium is close to advancing from Group G with two wins and will move one to the round of 16 on Sunday if England beats Panama.

A point from Belgium’s last game against England on Thursday in Kaliningrad will ensure a place in the knockout round. Belgium’s goal difference of plus-six is another big factor in the unlikely event of a three-way tie.

Belgium pressed Tunisia into giving up the ball in its own half, and attacked with pace and skill in a dizzying mix of talented play.

A World Cup record was broken when Hazard scored his sixth-minute penalty kick.

The first 27 games have all delivered at least one goal, breaking a mark set at the 1954 World Cup. Then, a 26-game tournament in Switzerland failed to produce a goalless draw.

Belgium’s King Philippe was in the VIP section to watch the game, with his two sons, Princes Gabriel and Emmanuel.

Midfielder Youri Tielemans told Belgian TV the king came to the locker room to tell players he was proud of how they represented their country.