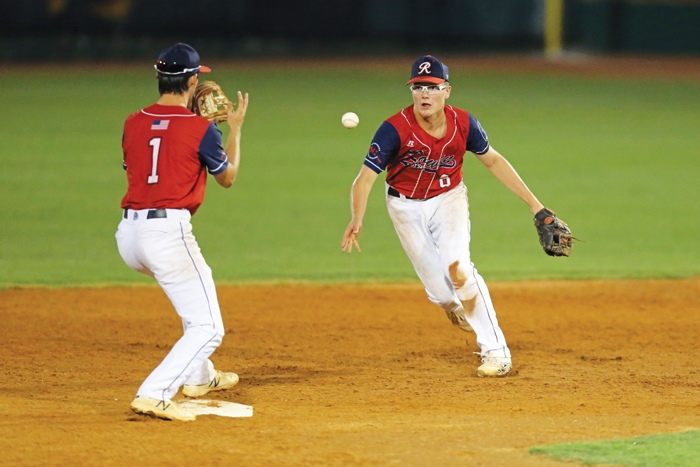 SALISBURY — Hayden Setzer was the lefty who made everything right Saturday night.

The Rowan County southpaw was an escape artist at Newman Park, where he tiptoed through minefield after minefield and posted his second consecutive complete-game shutout.

“I felt pretty good, but mostly I had confidence in my defense,” Setzer quipped after Rowan blanked visiting Stanly County, 3-0, and regained second place in the Southern Division standings. “I had to. I tried working in and out of the zone and kept throwing strikes, but I let them work behind me.”

Rowan (17-6, 3-2) turned a pair of double plays — both started by newly minted second-baseman Bryson Wagner — and played errorless ball. Setzer allowed six singles, including three straight to open the top of the fourth inning, before finishing with six strikeouts. He induced nine groundouts in a 100-pitch performance and improved to 4-1.

“Tonight, he was in a situation where he didn’t think that much,” said Rowan coach Jim Gantt, who visited the mound after Setzer walked leadoff batter Will Dagenhart and threw six of his first eight pitches out of the strike zone to start the game. “That’s kind of been his downfall. But with men on base he made some of his best pitches. That’s a sign of maturity.”

Setzer — who tossed a four-hit shutout last Saturday against Sumter (S.C.) — out-dueled Stanly left-hander Zach Grice, an all-state selection out of West Stanly High School and headed to Mars Hill in the fall. Grice surrendered two earned runs in 5 1/3 innings and made only one mistake. Setzer barreled his second pitch of the game over the wall in straightaway center field.

“When Zach is right, he’s one of our best pitchers,” Post 76 coach Jordan Sells said. “He’s had some tendonitis coming out of the school season and he got tired late in the game. But that pitch he left over the middle and Setzer did what good hitters are supposed to do. He didn’t miss it.”

The home run came on a 1-0 pitch and was Setzer’s fourth of the season. “Just a fastball right down the middle,” he shrugged nonchalantly. “I didn’t see it go out. By the time I rounded first (base) and looked up, it was already too late. I couldn’t find it.”

At least Rowan’s defense kept its eye on the ball. Center-fielder CP Pyle made a diving catch to rob Stanly’s Kolby Lamp of an extra-base hit in the top of the third. And Wagner, a converted shortstop playing just his second game at second base, rescued Rowan an inning later. Stanly (6-11, 2-4) loaded the bases with none out for Cody Kidd, the outfielder who produced a homer and a double when the team’s met in a June 8 non-leaguer. This time Setzer got him on a fly-out to shallow center.

“That was a fastball, high in the zone,” Setzer reported. “He just popped it up. It looked like he just missed it.”

Next up was catcher Hunter Sells, a distant cousin of Post 76’s coach. He ripped a stinging grounder up the middle, where Wagner calmly fielded the ball, stepped on second and relayed a throw to first-baseman Chandler Lippard for an inning-ending DP.

“It all lined up just right,” Wagner said. “I’m trying to keep my focus out there, no matter what, and just make the next play.”

Gantt thought the twin-killing was the game’s watershed moment. “It was the difference in the game,” he said. “We were in double play depth and (Wagner) broke immediately. It was a little short-hop play that he turned into two. I think it was the play of the game.”

More importantly, it restored Gantt’s faith in the East Rowan rising senior who failed to impress as a shortstop this summer.

“It tells you about his demeanor, his attitude, his team-before-self approach,” Gantt said. “A lot of people would have sulked about (changing positions). He embraced it and made some great plays to help our team win.”

Wagner made two more in the waning moments. First, he drew a bases-loaded walk against Stanly reliever Ryan Baucom in the bottom of the sixth. Rowan’s third run crossed on an infield error. Wagner secured the victory on Setzer’s final pitch, initiating a game-ending, 4-6-3 double play.

“There were people on base all night,” Wagner said. “But Setzer kept his cool and did his job. On both of those double plays, I was right where I needed to be. They were perfect ground balls and I got perfect hops.”

No one was more grateful than Setzer.

“He did a great job when he had to,” said Sells. “He dug himself some holes and then pitched his way out of them. That’s a good pitcher.”

NOTES: Rowan pitching coach Russ Weiker was excused to attend a friend’s wedding. … Rowan’s Wayne Mize had the game’s only other extra-base hit, a leadoff double to right-center in the top of the second. … Right-hander John Owen (4-1) starts tonight’s division game against visiting Mocksville. Owen threw 42 pitches in two innings Thursday at Kannapolis. … Stanly is idle until Tuesday when it hosts Rowan at Don Montgomery Park.