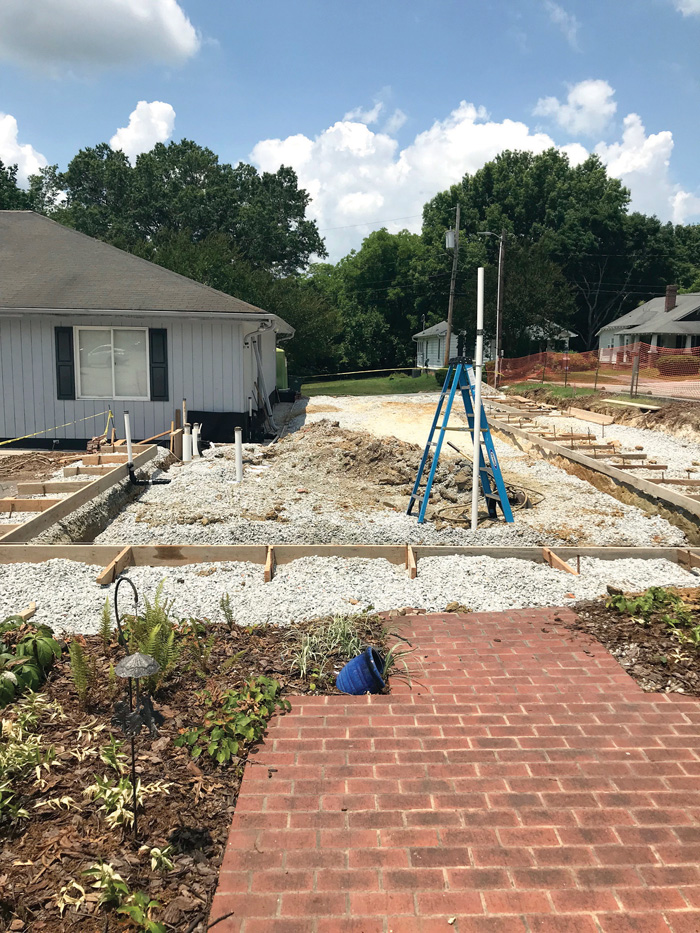 Susan Shinn Turner Prevent Child Abuse Rowan is expanding its facilities at the Terrie Hess House and looking for donations to complete the project.

SALISBURY — After Beth McKeithan served in the Peace Corps, her host mom from Namibia toured Prevent Child Abuse Rowan, the agency of which she is executive director.

The two discussed the difficulty of raising money, partly because of the nature of McKeithan’s work.

“People don’t want to talk about child abuse,” McKeithan says. “Some days are harder than others.”

But during that visit, McKeithan’s host mom told her something that’s stuck with her: “Every drop in the bucket makes the bucket full.”

McKeithan is currently filling a bucket for the agency’s expansion. Prevent Child Abuse Rowan broke ground on a 1,600-square-foot project at its offices at the Terrie Hess House, 130 Woodson St.

The capital campaign is tagged at a modest $400,000. The expansion includes a therapy suite with a separate entrance, three offices, and a community education room that will double as a board room.

The agency has raised half the funds, enough to begin construction. But McKeithan is now at a critical juncture. To be eligible for grants from foundations such as the Cannon Foundation and Duke Endowment, the agency must have 60 percent of the money in hand. That means McKeithan needs to raise $52,000 before the end of the year.

Many drops in the bucket.

Construction is moving quickly, McKeithan notes. Chris Bradshaw is the general contractor, and Pete Bogle is the architect.

“Chris is fabulous,” Beth says. “He’s been so patient and kind with us.”

Bradshaw is no stranger to the nonprofit world. His wife, Renee, is executive director of Family Crisis Council. Bogle recently designed the addition to Main Street Marketplace and Meeting Place — formerly Main Street Mission — which opens next month in China Grove.

The addition, McKeithan says, will better serve the needs of clients. She’s most excited about the therapy suite, which means the agency can serve more than one family at a time. Because of privacy, only one family was seen, either for a forensic interview or for therapy.

“Scheduling was a nightmare,” McKeithan admits.

Halfway through this year, the agency has served about 100 children. That number typically increases once school starts, McKeithan says. The agency has a prevention and education coordinator who visits the schools, and often students report instances of abuse to her.

McKeithan oversees a staff of seven full-time and part-time employees, with another six who contract with the agency to provide services. When construction is complete, McKeithan hopes to write a grant application to bring in a full-time mental health practitioner.

The campaign has received a lead gift for $50,000. Naming opportunities are still available. Donors to the capital campaign include:

McKeithan says she’s learned from other nonprofit agencies that once the walls go up, donations tend to go down.

“We have enough money to start this project, but we’re only halfway to our goal,” she says.

McKeithan said she would love to give potential donors a tour of the facility and talk about the important services the agency offers. It’s a difficult conversation, but it’s absolutely vital work, she believes.

“It feels discouraging sometimes,” she says of fundraising, “because we want this space so badly for the kids. I want people to understand the importance of this campaign.”