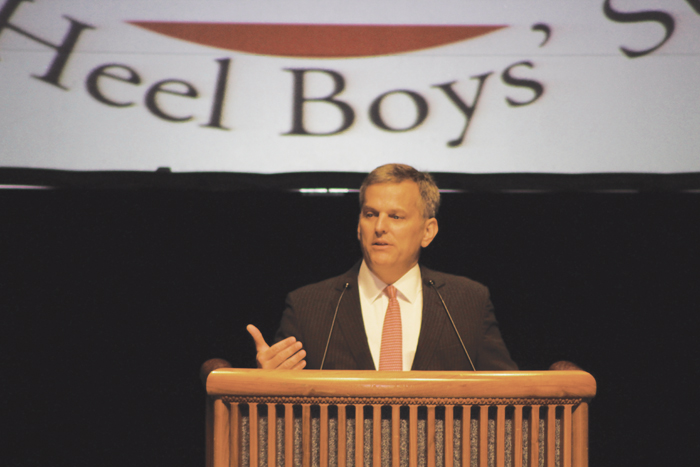 And the message, delivered from an elected official to a group focused on state government practices, was not just political in nature. Stein encouraged the students to become involved in whatever cause appeals to them: affordable housing, access to meals, tutoring and more.

The civic groups that deliver these services are what makes a community vibrant, he said.

“If you view your community as a quilt and each civic, religious, political and community charitable organization as a different patch, then you are the thread that sews the patch together,” he said.

The advice was well received from a man who said the central focus of his job is protection.

“Basically, every day I go to work to try to protect the people of our state in a number of ways,” Stein said.

He said his work and the work of other elected officials make government “essentially the largest civic organization.”

Government is a collective group trying to advance a common mission of making lives better, he said. Boys State students can join the mission if they engage in their communities.

“What you’ve learned here, working hard, rolling up your sleeves and applying yourselves with the intention of helping other people, that’s what government is,” he said.

Stein spoke of experiences in his teenage years and early adult life that inspired his lifelong commitment to community betterment.

In high school, he arranged a voter registration drive and a commissioner candidates forum held on school grounds and during school hours.

He said seeing the impact he had in the number of students who registered really showed him that he had power to affect the world around him.

In college, he protested his university’s investment in American companies that were doing business in South Africa. He watched as his and others’ efforts changed institutional and federal practices.

“I strongly believe that each one of us, no matter where we are in life, has a responsibility to other people outside of our own little world,” he said.

Of government, Stein praised the “institutions that helped us become the country that we are,” such as the separation of powers and free and fair elections.

“If you believe in and bolster these ideas and principles, in the process you are bolstering democracy and bolstering our nation,” said Stein.

The separation of powers through the branches of government protects Americans from tyranny and the weaknesses of humanity, he said.

Voting, he said, is a fundamental right and how the government is held accountable for what the public thinks is right.

Stein said the students and others need to participate in order to give the government sufficient legitimacy.

“We have peacefully transferred the power of the White House from one party to the opposing party 25 separate times,” he said. “This is an incredible accomplishment unprecedented in human history. … The reason it can happen is because voters believe the outcome of the elections that happen. They believe in the results.”