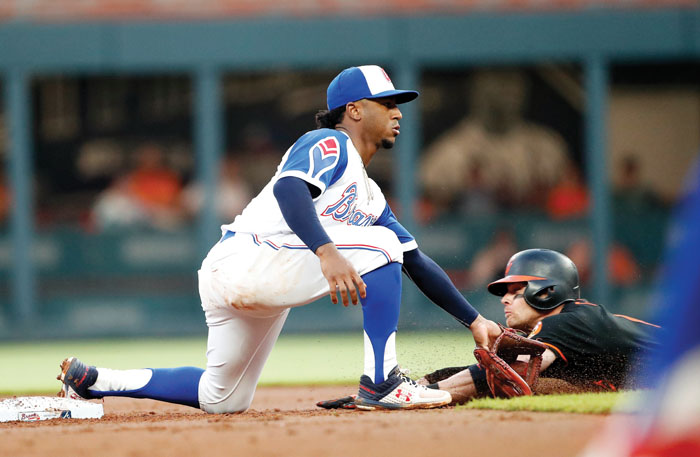 By CHARLES ODUM, AP Sports Writer
ATLANTA (AP) — Manny Machado hit a tiebreaking two-run homer in the 15th inning, lifting the Baltimore Orioles to a 10-7 win over the Atlanta Braves on Friday night after each team staged dramatic ninth-inning rallies.
The Braves surrendered six runs in the ninth, and then scored four times in the bottom of the inning.
Peter Moylan, Atlanta’s eighth pitcher, hit Craig Gentry to open the 15th. Gentry moved to second on Austin Wynns’ sacrifice.
With first base open, the Braves pitched to Machado and the slugger lined his 19th homer into the Orioles’ bullpen. Moylan (0-1) gave up another run on singles by Colby Rasmus and Jonathan Schoop.
Mike Wright Jr. (1-0), Baltimore’s seventh pitcher, threw two scoreless innings.
The game lasted 5 hours, 21 minutes. Fans booed after the Braves announced the length of the game forced the team to cancel the postgame fireworks show.
The Orioles trailed 3-1 heading into the ninth, and the Braves rallied against closer Zach Britton in the bottom of the inning. Braves closer Arodys Vizcaino was not used while Dan Winkler allowed four runs while recording only one out.
Chris Davis hit a drought-breaking homer and drove in the go-ahead run with a sacrifice fly as Baltimore opened a 7-3 lead.
Britton got one out and was charged with four runs and five hits. He gave up a single to Johan Camargo and a double to Danny Santana before hitting Ender Inciarte to load the bases.
Ozzie Albies’ bases-loaded single drove in Camargo. Freddie Freeman’s two-run single cut the lead to one before Nick Markakis tied the game with a double to right field.
Atlanta had jumped in front on Charlie Culberson’s tiebreaking two-run double in the eighth.
Davis, making his first start since June 11, hit his first homer since May 9 in the fifth. Camargo tied the game with his run-scoring double in the seventh.
Braves left-hander Sean Newcomb allowed five hits in seven innings.
Orioles right-hander Alex Cobb permitted four hits in seven innings. He opened the game with six scoreless innings after allowing a combined 14 runs in his last two starts.
As part of the team’s celebration of Hank Aaron this week, the Braves wore 1974 throwback uniforms.
The start of the game was delayed 11 minutes by rain.
TRAINER’S ROOM
Orioles: OF Trey Mancini (stiff neck) struck out as a pinch hitter in the eighth. He did not start for the second straight game. … INF Tim Beckham (core muscle surgery) could return Monday. He has been out since April 25.
Braves: RHP Mike Soroka was placed on the 10-day disabled list, retroactive to Wednesday, with right shoulder inflammation. It is the rookie’s second DL stint with the shoulder issue. He missed 24 games from May 17 to June 13. He allowed four runs in 4 2/3 innings and his velocity dropped in the Braves’ 11-4 win at Toronto on Tuesday. Santana was recalled from Triple-A Gwinnett. … RHP Mike Foltynewicz (right triceps tightness) threw on the side without problems and could come off the DL to start Monday against the Reds.
UP NEXT
Orioles: RHP Dylan Bundy (5-7, 3.81 ERA) is 5-2 with a 2.89 ERA in eight career interleague games, including seven starts. He will be making his first career appearance against Atlanta on Saturday.
Braves: RHP Julio Teheran (5-4, 3.97 ERA) will make his second career start against Baltimore.
___
More AP baseball: https://apnews.com/tag/MLBbaseball