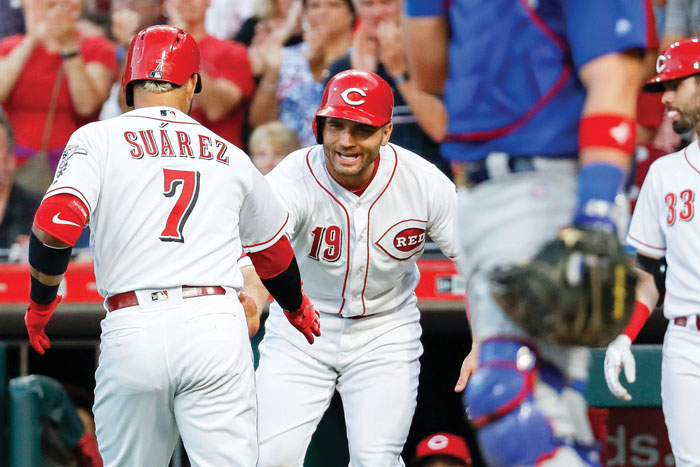 Yasiel Puig added a solo home run in the ninth, and the defending NL champions won their 10th straight against the Mets dating to May 2016. Los Angeles has outscored New York 75-20 in those games, winning each of the past eight by at least three runs — a first in Dodgers history against any opponent, according to STATS.

Wood (3-5) outdueled Zack Wheeler (2-6), allowing two runs and six hits in six innings to win his second consecutive start. The left-hander with the funky delivery struck out seven and walked one.

Kenley Jansen fanned two in a perfect ninth for his 19th save.

New York wasted a dazzling catch by center fielder Michael Conforto that saved a run in the third. After starting the season 11-1, the Mets lost for the 21st time in 27 games to fall a season-worst 11 games under .500.

CINCINNATI (AP) — Eugenio Suarez hit a go-ahead homer off Jose Quintana in the fifth inning, and Cincinnati held on for its fifth straight victory.

The Reds have won the first two games in the series, a recent rarity in the rivalry. It’s only the second time in the last two years that they’ve won back-to-back games in a series against the Cubs. Chicago is 43-21 against Cincinnati over the last four seasons.

Suarez’s two-run shot in the fifth inning off Quintana (6-6) gave him a team-high 16 homers and put the Reds ahead 4-3.

Javier Baez drove in a run with a bunt single off Luis Castillo (5-8), and Kyle Schwarber followed with a two-run homer, his third in four games. Castillo went 5 2/3 innings for his first victory since May 24, ending a streak of four straight losses.

Utilizing a bullpen day, the Rays improved to 14-31 against teams with a .500 or better record with the victory over the team with the majors’ best record.

Winner Ryan Yarbrough (6-3) entered in the second and allowed one hit in 3 1/3 scoreless innings. Sergio Romo worked the ninth for his fifth save in nine chances.

Willy Adames put the Rays ahead 1-0 with a run-scoring single off CC Sabathia (4-3) in the fourth. Sabathia allowed two runs and nine hits in 5 1/3 innings.

CHICAGO (AP) — Franklin Barreto hit a pair of three-run homers and Oakland won its season-high fifth in a row, pounding Chicago in the first game of a doubleheader.

The White Sox have lost eight in a row, their worst skid since a nine-game rut last July.

It was quite a display for a player who came in with just three home runs since his debut last season. Both of his drives in 2017 were against the White Sox, with the first of his career coming against Shields (2-9).

DENVER (AP) — Jon Gray struck out 12 in seven dominant innings, Nolan Arenado homered in Colorado’s six-run fourth, and the Rockies won their fourth in a row by beating the Miami Marlins 11-3 on Friday night.

It was Gray’s 12th career 10-plus strikeout game and the fourth this season. He had at least two strikeouts in five of his innings, including striking out the side in the sixth. Gray (7-7) walked none and withstood a solo homer in the third by Derek Dietrich, who drove a 2-0 pitch the opposite way into the left-field bleachers.

Arenado had three hits, including his team-leading 17th homer, a two-run drive. Tom Murphy had two doubles among his three hits and two RBIs.

The Rockies have scored at least 10 runs in three of their four wins. Even Gray pitched in with a run-scoring sacrifice in the fourth in which he reached when a sliding Carlos Gonzalez beat the throw home from first baseman Justin Bour.

PITTSBURGH (AP) — Ketel Marte’s two-out single in the 13th inning led the Arizona Diamondbacks to a 2-1 victory over the Pittsburgh Pirates on Friday night.

Marte’s liner into center field off Tyler Glasnow (1-2) scored Jon Jay from second base as the NL West-leading Diamondbacks won for the fourth time in five games. Jay walked to start the rally, then advanced to second on a two-out wild pitch before Marte followed an intentional walk to David Peralta with his winning hit.

Andrew Chafin (1-0) pitched one scoreless inning for the win, and T.J. McFarland notched the first save of his six-year career with a perfect 13th.

The game was scoreless until both teams scored an unearned run in the 11th following a pitcher’s duel between Arizona’s Patrick Corbin and Pittsburgh’s Ivan Nova.

BOSTON (AP) — J.D. Martinez homered and drove in five, and the Boston Red Sox rallied from a five-run deficit to beat the Seattle Mariners 14-10 on Friday night despite a monster game from Nelson Cruz.

Cruz had a pair of three-run homers and drove in seven, but the Mariners still lost their season-worst fifth straight game, including three earlier this week at Yankee Stadium. Seattle led 4-0 and 10-5 before a wild Red Sox rally fueled by RBIs from eight different players.

Martinez went 4 for 5, including a two-run homer in the sixth and two doubles. The Red Sox set a season high with 20 hits.

Reliever Matt Barnes (1-2) got the win with one scoreless inning, and Craig Kimbrel pitched the ninth.

The only flaw to the second half of the game for Boston: shortstop Xander Bogaerts left in the seventh with a sprained index finger on his left hand.

The 23-year-old Bieber (2-0) allowed four hits and walked one in his third major league start. The Tigers only pushed two runners past first base in his 97-pitch gem, stranding them both at third.

Bieber became the third Indians pitcher with six or more strikeouts in his first three big league appearances, joining Herb Score (eight in 1955) and Luis Tiant (three in 1964). Zach McAllister and George Kontos each got three outs to finish the five-hitter for Cleveland’s eighth shutout of 2018.

Alonso’s fourth career grand slam came off Johnny Barbato as part of a five-run seventh that stretched the lead to 9-0. Alonso and Encarnacion each had two of Cleveland’s eight hits in the opener of a three-game series.

HOUSTON (AP) — Royals rookie Rosell Herrera kept the game scoreless with a home-run robbery in the eighth inning and hit an RBI triple in the ninth, and struggling Kansas City beat the Houston Astros 1-0 on Friday night.

Herrera helped the Royals end a nine-game skid by bringing back Alex Bregman’s would-be homer. The right fielder reached over the short outfield wall to snag the first out in the eighth.

Adalberto Mondesi then singled off Ken Giles (0-2) to start the ninth, stole second and took third on a flyout by Whit Merrifield. Herrera then sent a ball to center field to score Mondesi and make it 1-0.

Herrera also had a double and is batting .278 in five games since being cut by Cincinnati and acquired by the Royals.

Bouncing back from a rough May, Minor (5-4) has thrown three straight quality starts for the first time since throwing six straight in 2014 for Atlanta. He allowed one run and three hits, lowering his ERA for June to 2.84.

Choo’s two-run shot off Fernando Romero (3-3) made it 4-0 in the fifth. It was his second homer on Texas’ six-game road trip.

At press time, the Atlanta Braves and Baltimore Orioles were playing in the 14th inning, tied 7-7. The Orioles scored six runs in the top of the ninth inning, taking a 7-3 lead. However, Atlanta answered with four runs in the bottom of the frame, tying the contest.

See salisburypost.com for the final score of this game.

Minor faced the minimum number of batters through five innings despite a first-inning single by Brian Dozier to deep left. Dozier tried to stretch for second, but Joey Gallo had a good jump and easily threw him out to end the inning. Minor retired his next 12 batters before Max Kepler doubled to lead off the bottom of the sixth.

Texas opened the fourth with three straight singles off Romero, including a run-scoring hit up the middle by Adrian Beltre. Rougned Odor then drove in Nomar Mazara with a fielder’s choice.

The Twins finally broke through in the sixth when Joe Mauer’s one-out double scored Kepler, putting runners on second and third. But Minor retired Eddie Rosario and Dozier on popups, ending the threat.

Chris Martin got three outs before Jesse Chavez finished for his first save. Choo, Mazara and Beltre each drove in runs off Matt Belisle in the ninth.

Rangers: Martin (calf) was reinstated from the 10-day DL. Texas optioned Ricardo Rodriguez to Triple-A Round Rock on Thursday to make room for Martin, who was hurt while attempting to run onto the field during a benches-clearing brawl with the Dodgers last month. … LHP Martin Perez (elbow) is scheduled to begin a rehab assignment for Class A Hickory on Monday. Manager Jeff Banister said he expects Perez to work at least three innings. … LHP Joe Palumbo will pitch for the Arizona League Rangers on Sunday, marking his first action since undergoing Tommy John surgery in April 2017.

Twins: Rosario went 0 for 4 after missing a game with shoulder soreness. … INF Eduardo Escobar pinch-hit in the eighth after taking a pitch to the elbow Thursday against Boston. Manager Paul Molitor said before the game he was optimistic Escobar would be ready to start Saturday. … RHP Ervin Santana (finger) threw 35 pitches to hitters on Friday. “He said it’s one of the better days he’s had in a while, so I was encouraged by that,” Molitor said.

Rangers: Yovani Gallardo (0-0) will make his second start of 2018 after exiting Sunday’s game against Colorado trailing 5-1.

Twins: RHP Jake Odorizzi (3-4) makes his seventh career start against the Rangers and first of the season. He’s 4-0 with a 2.02 ERA against Texas.

Danny Duffy pitched six innings of two-hit ball for the Royals, and the bullpen didn’t allow another knock. Justin Grimm (1-2) pitched a scoreless eighth and Tim Hill threw a perfect ninth for his first save.

Houston was shut out for the first time since May 11. They still had several opportunities to score because of seven walks but went 0 for 9 with runners in scoring position.

Houston starter Dallas Keuchel pitched six strong innings. He allowed six hits and struck out six, while Duffy fanned seven after being tagged for seven runs in six innings of a loss to the Astros on Saturday.

It was a much-needed win for the Royals, who just wrapped an 0-8 homestand and had lost 15 of their last 16 entering Friday’s game.

Alcides Escobar started in center field Friday, snapping a streak of 407 straight starts at shortstop dating to Sept. 26, 2015. That streak was the longest in Royals history and the longest active streak in the majors. It’s the first time he’s played a position other than shortstop since he joined the Royals in 2011 and the sixth time in his career he’s played in the outfield, after appearing in five games there for the Brewers in 2010.

The Royals started Mondesi at shortstop instead. They have said Escobar will also see time at second and third base this season.

“I just think that the time was right,” manager Ned Yost said. “He knows that his next career move is probably going to be a utility-type player … and he’s anxious to start showing people that he can handle it.”

Escobar, who entered the game 2 for 28, had two hits including a double.

Kevin McCarthy took over for Duffy in the seventh and issued consecutive walks to Evan Gattis and Marwin Gonzalez. Pinch-hitter Tony Kemp then grounded into a force out that left Gattis out at third. But the Astros loaded the bases when pinch-hitter Tyler White reached on a fielder’s choice.

Houston came away empty-handed when George Springer grounded into a double play.

Salvador Perez doubled with one out in the eighth and Houston intentionally walked Alex Gordon before Alcides Escobar drew a walk to load the bases. The game remained scoreless when Hector Rondon struck out Paulo Orlando to end the inning.

Astros: Manager A.J. Hinch said RHP Joe Smith (right elbow inflammation) is improving but still has several steps to go through before he’s ready to come off the disabled list.