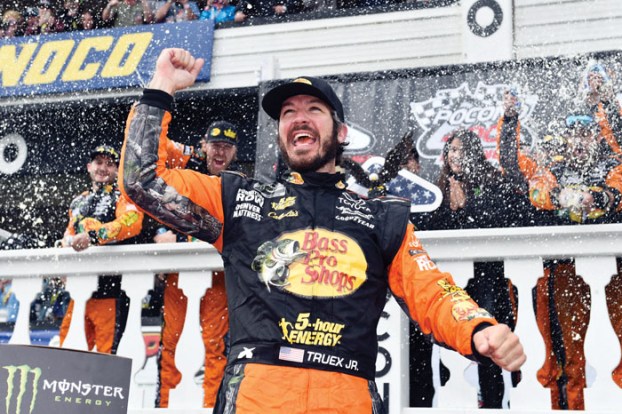 FILE - In this June 3, 2018, file photo, Martin Truex Jr. celebrates in Victory Lane after winning the NASCAR Cup Series auto race in Long Pond, Pa. Truex hopes to continue the good times this weekend at Sonoma Raceway as he tries to pull closer to Kyle Busch and Kevin Harvick in the points standings. Truex won at Sonoma in 2013. (AP Photo/Derik Hamilton, File)

Back at Sonoma, Truex Jr. works to build NASCAR momentum

Martin Truex Jr.’s win at Pocono three weeks ago served notice that this year’s points race might be more than a two-man showdown between Kyle Busch and Kevin Harvick.

Now NASCAR’s defending champion is back at Sonoma Raceway, where he’s had plenty of success.

Truex won at Sonoma in 2013 and led several laps of last year’s road race before engine trouble sidelined him with a disappointing finish. The 37-year-old is one who enjoys switching to road courses — as opposed to the usual steady diet of ovals — and hopes it can help him vault closer to Busch and Harvick in the points standings.

“Any time you enjoy a place and have some success, it seems like the success just comes more and more because you really enjoy it and focus in on it,” Truex said. “For me, I just like it here. It’s become a good track for me.”

Truex is currently sixth in the standings, just behind Brad Keselowski and Clint Bowyer. He’s already qualified for the playoffs because of his two victories, so now his team’s trying to figure out how to be more consistent.

The past two races have been a good microcosm of the up-and-down season. One week after winning at Pocono , Truex finished 18th at Michigan.

“We’d like to just get a little more consistent,” Truex said. “We’ve had a few bad races throughout the season. We’ve been really fast — we’ve got those two wins. But we haven’t had as many stage points. Last year we did a good job at winning stages and gathering a lot of points for the playoffs. That’s something we’ve lacked this year and something we’re focused on.”

Truex said he doesn’t expect Busch or Harvick to be any less successful at Sonoma because of the switch to a road course. The two have combined to win nine of 15 races so far this season.

“If you look at it those guys are really good on road courses as well,” Truex said. “They’ve got good numbers here.”

Truex said he feels his team isn’t far off from where it was last season, when he won eight races and captured his first championship. He praised both Busch and Harvick for great seasons and said his team’s working to figure out how to match them.

“We’re off a tick from where we were and those guys are just a tick better,” Truex said.

Truex hopes being back at Sonoma — and remembering how good his car was last year before the engine trouble — can be a spark to push his team forward.

“We had a really good shot at winning last year and it really stung for us,” Truex said.