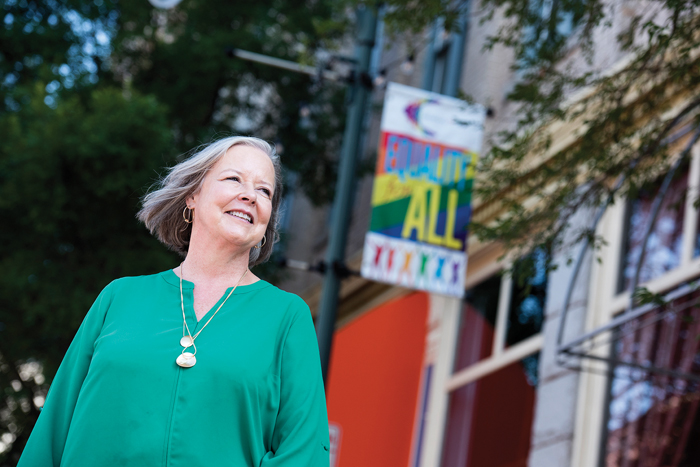 If it weren’t for Maggie Blackwell, Salisbury’s Pride Festival might have ended after year one.

“At a time when Salisbury Pride was deemed divisive, which was not my description, Maggie Blackwell stepped in to reflect the values of the city,” said City Councilwoman Tamara Sheffield, a Salisbury Pride board member at the time and still one today.

The first Pride Festival in 2011 was met with a number of protests and community concerns. There was a question whether the city would allow the festival to go on.

Blackwell, who was mayor pro tem at the time, convened meetings with the police and fire departments, as well as spoke with other city agencies, employees and council members.

“She was not overtly in people’s face about it,” said Beth Meadows, Pride’s board president. “She wasn’t our only friend, but she was the one that we saw. She was able to reach out to people and people came to her knowing that she was supportive. They came and expressed their support. Through that expression — be it the Fire Department, be it the Police Department — she was able to bring those voices to center, behind the scenes in a very quiet way.”

To honor her efforts on behalf of the community, Salisbury Pride will honor Maggie Blackwell with the Ally Award at the eighth annual Pride Festival this Saturday in downtown.

Sheffield called Blackwell with the news of the award a few months ago.

“The first thing I did was cry,” said Blackwell. “Although it’s a big honor and I’m very happy to receive it, I look forward to the day when we don’t get an award for treating our fellow human beings with respect.”

Blackwell described her work as behind the scenes.

“I had to educate some council members privately and work with our city manager to remove barriers,” she says.

Then-Police Chief Rory Collins was also involved. “He became very supportive of the process because of the First Amendment rights,” she said.

Sheffield added, “It would have been easy to pull the plug after the first festival. Maggie pulled it all together, in my opinion. I’d call her a ‘champion for change’ for the city of Salisbury when it comes to diversity and inclusion.”

Blackwell credits her desire to do the right thing to her upbringing. She recalled a school item that was a vivid guidepost in her life.

She has attended all seven Salisbury Pride festivals and is pleased to have witnessed its growth through the years.

“Things are never as bad as people think they will be. But this has proven to be a boon for downtown businesses and a safe and healthy venue. I see many families that I know bringing their kids. Nobody had to prove anything. It has proven itself not to be a threat to the community. I just think that’s the best way for it to happen.”

“I have a bunch of awards. Some of them I didn’t keep. Some of them are in a drawer for my kids to find. And the top ones are up there on the mantle,” she said, her voice cracking with emotion. “And this award will go up there with the key to the city.”

She received the key to the city when she stepped down from the City Council after eight years of service.

Meadows conveyed her thanks knowing how far Pride has come as an organization.

“Seeing where we are today and knowing the impact we have had, if it had not been for Maggie Blackwell, we would not be here. I extend my heartfelt thank you for that.”

The Salisbury Pride Festival will be from 11 a.m. to 5 p.m. Saturday in downtown Salisbury. For a full line-up of performers and entertainers, visit www.salisburypride.com.

Christmas in June: A broken ornament leads to a…