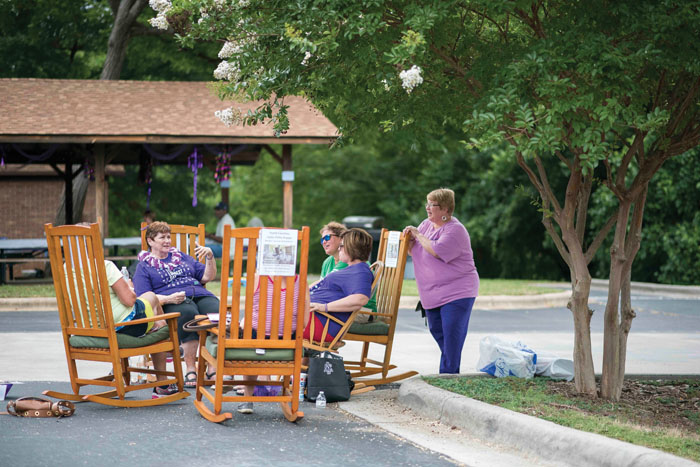 For the first year, Rufty-Holmes joined the Alzheimer’s Association’s Longest Day of the Year. It’s an annual observance on the first day of summer, meant to raise money for Alzheimer’s research and to provide support, recognition and resources to caregivers.

The Longest Day is one way they can be honored for their sacrifices and make connections to help them in the future.

It’s the first year Rufty-Holmes has celebrated the Longest Day, and the senior center planned a bash running from sunrise to sunset. Buehrer said the day kicked off at 7:30 a.m. with standing yoga and would continue with food, music and fun until 7 p.m.

“We’re just thrilled at the opportunity to bring attention to the support effort for caregivers and to just have fun,” Buehrer said.

And throughout the day, the chairs kept rocking.

Members of Alpha Delta Kappa sorority’s Gamma Theta chapter had signed up to keep runners tapping on the pavement.

Debbie Lesley, Alpha Delta Kappa state president and a member of the Gamma Theta chapter, said the sorority has a close partnership with the Alzheimer’s Association. Lesley also works part time at Rufty-Holmes, and when she heard the center would host a Longest Day event, she jumped in.

“I said, ‘You could do a rock-a-thon and Alpha Delta Kappa could do it for you,’” she recalled with a laugh.

Members signed up to rock throughout the day, keeping the chairs in constant motion. Many were sponsored to rock, donated themselves or collected money.

“This is an altruistic project for our chapter,” Lesley said.

Last year, Alpha Delta Kappa raised more than $50,000 for the Alzheimer’s Association, she said. This year, Lesley challenged N.C. chapters to raise a state total of $2,000 — a benchmark they’ve already passed, she said.

The rock-a-thon at Rufty-Holmes, too, had already passed its goal. Lesley and other members hoped to collect about $200 by the end of the day. Three hours into the 12-hour event, they had passed the goal.

Rockers collected money throughout the day, but a total was not available at press time.

In addition to the rock-a-thon, visitors could peruse a yard sale, play games or enjoy a classic car show or live music.

Attendance throughout the day was sparse, but Buehrer said she and other organizers kept conservative hopes for the first-year event. By about 10:30, Buehrer estimated that roughly 40 people came through to rock, browse wares for sale from trunks in the back parking lot or to enjoy a bite of food.

“We have no expectations other than the folks that are coming have a good time,” she said.

Prepping for hurricane season: N.C. HART in training this…