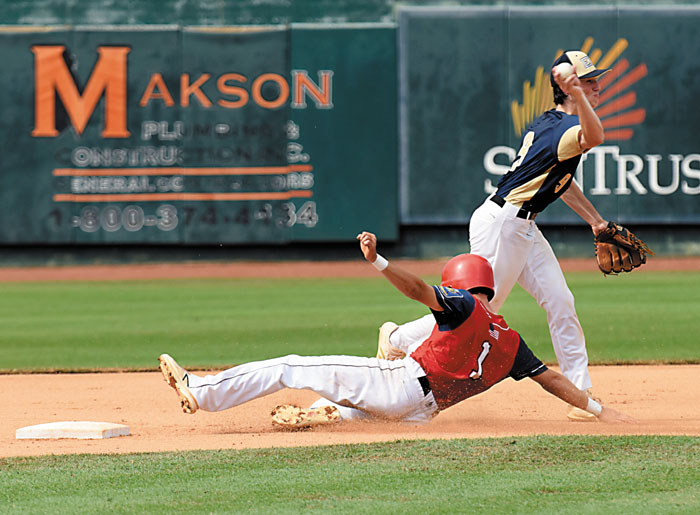 KANNAPOLIS — It is four games into a 10-game Southern Division schedule — and Rowan County has some catching up to do.

“It’s not where we want to be,” coach Jim Gantt said after Rowan (15-6, 2-2) descended into third place. “You can’t give away five unearned runs. If you don’t play any better than that, you’re not going to beat a team with a good pitcher on the mound.”

Actually, Rowan gave away six unearned runs — but five came in the last of the first inning when Kannapolis (8-5, 5-0) capitalized on two infield errors and got a 5-0 head start. That was more than enough for winning pitcher Rohan Handa, a lefty with a beguiling assortment of pitches who worked into the seventh inning.

“It’s just his fourth start, but every time he goes out there we have a chance to win,” winning coach Joe Hubbard said after Post 115 snapped an 11-game losing streak against Rowan. “He gets ahead of hitters, works fast and mixes it up. He’s got that quirky motion that makes him very deceptive.”

Rowan managed only three hits against Handa, who threw 102 pitches and was lifted after yielding Luke Barringer’s leadoff single in the top of the seventh. He struck out seven, walked four and threw only two mistake pitches — a 2-2 changeup that Chandler Lippard hoisted over the left-field fence in the fourth and a hanging curve that Bryson Wagner sliced to right-field for a triple an inning later.

“He had a really good fastball with some hop on it,” said Gantt. “And he was deceptive. He didn’t throw many breaking balls for strikes. He threw a few change-ups — Lippard hit one of them up on a bank out there. We just weren’t on time for his fastball. It looked like it had (normal) velocity, but he was definitely getting it by us.”

Rowan right-hander John Owen started and took his first loss in five decisions. He pitched two innings – and one of them went well. The ground-ball specialist was the victim of some raggedy defense in the K-Town first, when the hosts paired three hits with a hit-batsman and two Rowan throwing errors.

“Early mistakes hurt us in this game,” said Wagner, the Rowan shortstop who’s two-out overthrow to first base delivered Post 115’s fourth and fifth runs. “We should be playing better baseball. It’s a very easy fix. Everybody’s got to focus more and make the next play. I feel confident going forward.”

Owen worked a 1-2-3 second inning before a 58-minute weather delay ended his outing. On a night when nearly everything went wrong for Rowan, he couldn’t make it right. He allowed three hits, notched three strikeouts and was spelled by left-hander Maddux Holshouser after making 42 deliveries.

Rowan trailed, 6-0, with one away in the fourth when Lippard connected for his third homer of the season. “He just missed with a change-up down the middle,” the beefy first-baseman said. “I didn’t miss it.”

Wagner’s leadoff triple in the fifth skipped past right-fielder Cord Butler. He scored Rowan’s second run on a wild pitch. Kannapolis closed the scoring when Chase Orrock lined a leadoff double to left in the last of the sixth — chasing Holshouser after three-plus inning of relief work. Lane Argabright smashed reliever Clayton Gilmore’s first pitch into left for an RBI-single, securing his team’s first win over Rowan since 2012.

“It’s really nice,” he said. “Rowan is the cream of the crop around here, year after year. We just took advantage of opportunities they gave us early in the game. It helps when your pitcher can relax a little.”

NOTES: Since winning its first nine games, Rowan has gone a pedestrian 6-6. … Rowan opens a three-game homestand at Newman Park tonight when Davidson County visits for a non-division tilt. Gantt indicated southpaw Daniel Durham (1-0) will get the start. Hayden Setzer (3-1) chases his fourth win on Saturday against Stanly County in an important league matchup.