Christmas in June: A broken ornament leads to a package on the porch 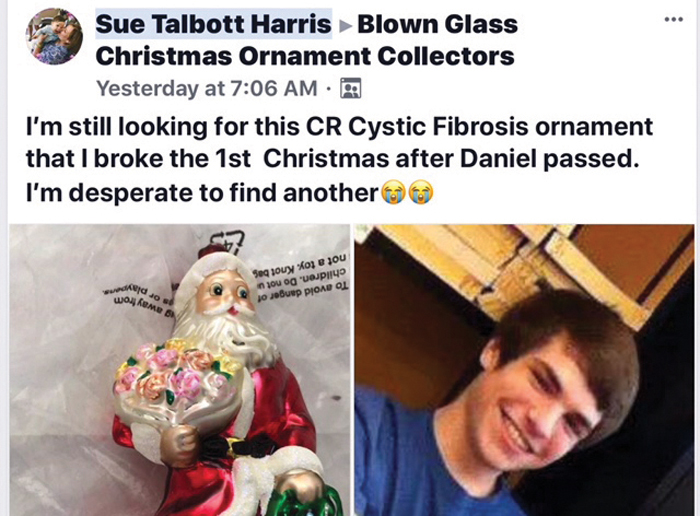 This is a screenshot of a Facebook post Sue Harris made during her search for a Christmas ornament replacement. Her late son, Daniel, who died from cystic fibrosis in 2016, is on the right.

SALISBURY — This is a story about three strangers — women from North Carolina, Virginia and Florida — who connected over two incongruous things.

It starts with Sue Harris in Boynton Beach, Florida. Sue’s youngest son, Daniel, was diagnosed with cystic fibrosis when he was 18 months old.

Soon after that diagnosis in 1999, Sue’s mother bought the family a Christopher Radko Christmas ornament — a Santa Claus with roses — that Radko had made especially (with two others) as a way to raise money for CF research.

That ornament adorned the Harris Christmas tree every year.

Thanks to his parents and later his own perseverance, Daniel Harris managed living with CF fairly well. He was only in and out of hospitals a couple of times with CF-rlated troubles. He graduated from high school in 2016 and enrolled at Palm Beach State that summer.

His parents made sure he was set up in an apartment, and they said their goodbyes to him on a Sunday, heading back to Roswell, Georgia, where they were living at the time.

The next day, Daniel bought his books and sent his parents a photograph of how he had organized the room where he would be studying.

Tuesday was his first day of classes. That evening, Daniel called home and asked his parents for the Netflix password so he could watch a movie in his new digs.

It was the last time they would talk to Daniel.

At 3 the next morning, police were pounding on the Harrises’ door in Roswell and delivering the news that Daniel had died in his sleep. A friend had found him at the apartment. Daniel was only 19.

After last Christmas, Sue Harris was putting away her home’s holiday decorations when she dropped the Radko Santa ornament. It smashed into pieces when it hit the floor.

“I was just heartbroken,” Harris said in a telephone interview Thursday. “It was awful. It was just another piece of my heart that broke when I dropped that thing.”

Through social media this spring, Harris put out a call for help finding a replacement for the ornament she had broken. Her own search also led her to a Facebook page for the Blown Glass Christmas Ornament Collectors.

On the collectors’ page, Harris posted an image of the cystic fibrosis Santa ornament and a message that she was looking for help finding another one.

“Anyway,” she said in her post, “I broke this piece just this past Christmas, and I’m really, really hoping someone might see it, sell it, anything. I want/need this so bad.”

Sometime later, Harris followed up with another post, showing pictures of the ornament and her late son. “I’m still looking for this CR cystic fibrosis ornament that I broke the first Christmas after Daniel passed,” she said. “I’m desperate to find another.”

Patti Masiello, a resident of Alexandria, Virginia, and a member of the Blown Glass Christmas Ornament Collectors, already had launched her own search for the Radko ornament after seeing Harris’ first post.

She wrote Christopher Radko and said Lauren Miori “tried her best to find the ’65 Roses Santa’ in their old catalogs.”

“It seemed impossible,” Masiello added. “The only mention of the ornament on the internet was an old Worthpoint sale.”

When Harris posted on the collectors’ Facebook page again, Masiello intensified her web searches but turned up nothing. She then hit on the idea of searching “cystic fibrosis,” and it led her to a Salisbury Post story from Nov. 30, 2014.

The article was about Linda and Derby Holshouser’s plans to invite the public to their farmhouse and grounds for a “Country Christmas Open House,” the tour proceeds of which would go toward cystic fibrosis research.

No one in Salisbury is more connected to cystic fibrosis research than Helen Brown, now 85, whose two-day yard sales since 2001 have raised roughly a quarter-million dollars for the cause.

Helen and Ralph Brown have two grown grandchildren, Ann Ward and Michael Johnson, who both have cystic fibrosis. The Country Christmas Open House was one more effort by Brown, aided greatly by the Holshousers, to raise research money.

The Post article mentioned how Brown and others had fashioned a special Christmas tree in the Holshousers’ barn — a cystic fibrosis tree — which included “65 Roses” ornaments from Radko. Roses were part of the other tree decorations.

The rose connection to cystic fibrosis goes back to a woman named Mary Weiss, who had three boys with the disease. In 1965, Weiss’ 4-year-old son heard his mother on the telephone trying to raise money for CF research, but he thought she was saying “65 roses,” not “cystic fibrosis.”

Roses has been a symbol for helping children with CF ever since.

Masiello had a hunch that Brown might be able to help her find the Radko Santa ornament Harris needed. She contacted the Post, explained her efforts and was given a telephone number for Brown.

“I called and left a message, thinking I would never hear from her,” Masiello said later. “It was a challenge because Helen does not use computers.”

Brown called her the next day, and they had a long conversation that touched on many topics, including, of course, the ornament.

“I started describing the ’65 Roses’ ornament and Helen finished my sentence,” Masiello said.

Brown said she had that exact Radko ornament and, touched by Harris’ story, she wanted the Florida woman to have it.

Masiello gave Brown her mailing address and soon a package and a note from Brown appeared at Masiello’s house. Brown had enclosed the Santa ornament, along with two other Radko Christmas ornaments for Harris — a holiday bear and snowman, each holding roses.

Part of Brown’s note to Harris said, “I hope they will comfort her. Thank you for getting in touch with me so that I could do this.”

Masiello repacked the ornaments and Helen’s note and sent them to Harris. In a Facebook message, Masiello told Harris to be looking for the package. Here’s how the rest of that conversation went:

Harris: “Are you joking me??? You found one? I’m shocked … and thrilled! You are a sweetheart.”

Harris: “OMG! You sent me all three CF ornaments! I am literally in shock! You have no idea what this means to me.

“… I know everyone has a story and Daniel is mine. We were very close, and I know he was somehow involved in all of this.”

Masiello has sent Helen Brown a different Christoper Radko ornament for her to sell at one of her future yard sales. She also included some watermelon tea for the summer.

“Isn’t that neat?” Brown said this week about how everything turned out. “I thought it was very neat.”

Brown deflected, however, any need for notoriety on her part. She had tried the same show of modesty with Masiello, telling her, “You can just send (the ornament) to her, and it can be from you. I don’t need any credit or anything.”

Brown said the Radko Santa came out of her personal collection of many, many Santa Clauses. Someone had given it to her years ago.

“I’m old now, and my children are not going to want my collection,” she said. “I was delighted to send that to the lady.”

Sue Harris — and Daniel — were grateful to receive it.

Back in Florida, Sue said she was stunned by Masiello’s efforts and Brown’s gifts. She described it as “a very emotional week.” She’s not sure how to thank them properly.

“Doing something nice for a complete stranger who happened to be grieving over her son — I’m just blown away,” Harris said. “They gave me back a little piece of my heart.”

Contact Mark Wineka at 704-797-4263 or mark.wineka@salisburypost.com. Helen Brown’s next yard sale for cystic fibrosis research will be held Oct. 5-6.