The all-time NBA draft — the best pick from every slot 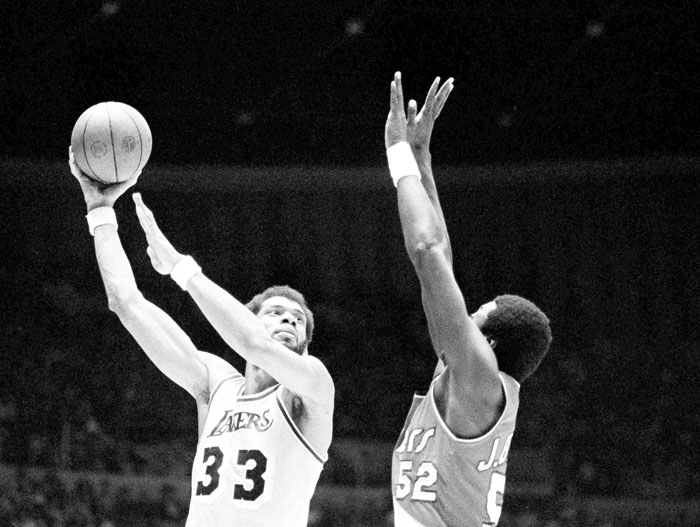 FILE - In this March 12, 1980, file photo, Los Angeles Lakers' Kareem Abdul-Jabbar (33) hooks a shot over Portland Trail Blazers' Jim Brewer (52) during the first half of an NBA basketball game in Los Angeles. Abdul-Jabbar, No. 1 draft pick, has the record for most career points in the NBA. (AP Photo/Lennox McLendon, File)

There’s a definitive answer every year to the question of who is No. 1 in the NBA draft.

But who is the No. 1 pick of all No. 1 draft picks ever? Or No. 1 among the list of No. 2 draft picks? Those are questions that have no definitive answer, except perhaps in a handful of rare cases.

Here’s a look at The Best of The Best — the top all-time NBA picks in each of the top 30 draft spots. The best No. 1 overall pick, the best No. 2 overall pick … and so on.

One note: This doesn’t include the territorial selections that were used through 1965, which ruled out Wilt Chamberlain.

The list of top picks in each of the 30 draft slots:

Arguments for the best-ever overall pick could and should be made for LeBron James, Shaquille O’Neal, Oscar Robertson and Magic Johnson, among others. When in doubt, give it to the man who has more points than anyone who ever played the game and who mastered perhaps the most difficult shot to guard in NBA history.

You didn’t know Bill Russell was a No. 2 overall pick? Jerry West was too, and he’s The Logo for goodness sake, but the 11 rings make Russell the call here. Also, it’s time to lay off Portland. Sam Bowie wasn’t the biggest “oops” pick of all time. Si Green was picked before Russell in 1956.

The easiest pick of them all. Except for Portland in 1984, when the Trail Blazers took Bowie No. 2 ahead of MJ. OK, now it’s really time to lay off Portland.

Dikembe Mutombo, Chris Bosh and Russell Westbrook were all No. 4s as well, but Paul’s body of work over 13 seasons and counting can’t be overlooked.

Charles Barkley will think this pick is terrible. So will fellow No. 5s Kevin Garnett, Ray Allen, Scottie Pippen and Vince Carter. Wade’s scoring wins out.

Second-easiest pick of this process. Only Adrian Dantley comes close, and he absolutely doesn’t come close.

He will be the leader in 3-pointers, by a ton, when his career is over. Fellow No. 7s John Havlicek and Chris Mullin merit consideration, but why wait?

As time goes on, people might forget how vital The Chief was to those Celtics teams of the 1980s. That shouldn’t happen.

Jordan was the only true candidate at No. 3, Bird was the same at No. 6, and Nowitzki stands alone at No. 9 as well.

Pierce and Nowitzki have haunted those who made the decisions at the top of the 1998 draft — where Michael Olowokandi, Mike Bibby and Raef LaFrentz went 1-2-3 — for 20 years and counting.

Kiki VanDeWeghe was a No. 11 pick and so was Klay Thompson, but Miller is the deserving call here. His shot was art.

Drafted in 1972 and didn’t come to the NBA until 1976, Doctor J ekes out the pick here over Chet Walker — a seven-time All-Star.

This could easily have been Karl Malone. But Kobe has five rings and an Oscar.

The Glide was automatic for 20 points a night for basically his entire career. Apologies to Tim Hardaway.

Someday, this spot might go to Giannis Antetokounmpo or Kawhi Leonard. But Steve Nash going this low in 1996 should remind everyone how good that draft was.

This is yet another reminder that Sam Bowie wasn’t the only mistake made in 1984.

This was a difficult group, and Shawn Kemp was probably the better player. Nellie gets the call on total body of NBA work.

There are some really good players at No. 18, including Calvin Murphy and the vastly underrated Ricky Pierce. Dumars’ role on the Bad Boys was invaluable.

When looking at No. 19 picks, two things stand out: Rod Strickland should have been an All-Star, and that Tiny was better than many remember.

So consistent for so long, and now with his son in the league that means more people will get educated about Sr.’s game.

Michael Finley and Ricky Davis also went this far down in the draft. Rondo was an absolute steal in 2006 — except he wasn’t a steal for Phoenix, which drafted him and then traded him to Boston for cash.

Tayshaun Prince was so good and World B. Free was as much fun as anyone, but English had about a 10-year run where he hardly ever missed a game and dropped about 25 every time he was out there.

Officially, the hardest of all 30 picks. Don’t just look at his NBA numbers. Look at his whole career. He did things no big man was doing 20 years ago. Terry Porter, Andrei Kirilenko, Kyle Lowry, Sam Cassell, Derek Fisher, Latrell Sprewell all went No. 24 as well … good luck to whoever No. 24 is this year. There’s a legacy to follow.

Jeff Ruland was known as “McFilthy” and became a good college coach, Tony Allen was a true defensive star, but Price’s game is too solid to miss here.

Now running the Sacramento Kings, Divac gets to pick No. 2 in this year’s draft. The guy he takes there would be well-served to learn from Vlade.

Before he became a political operative, Rodman was as good at rebounding and defense as anyone in the game.

If he had grown up in the U.S. and played college basketball, there was no chance he would have gone this low in 2001.

Hall of Famer, five-time All-Star and someone who was as good as there was in the NBA down the stretch of big games.

Another Hall of Famer, and every underclassman who gets drafted this year needs to thank Haywood. His suit vs. the NBA paved the way for them.