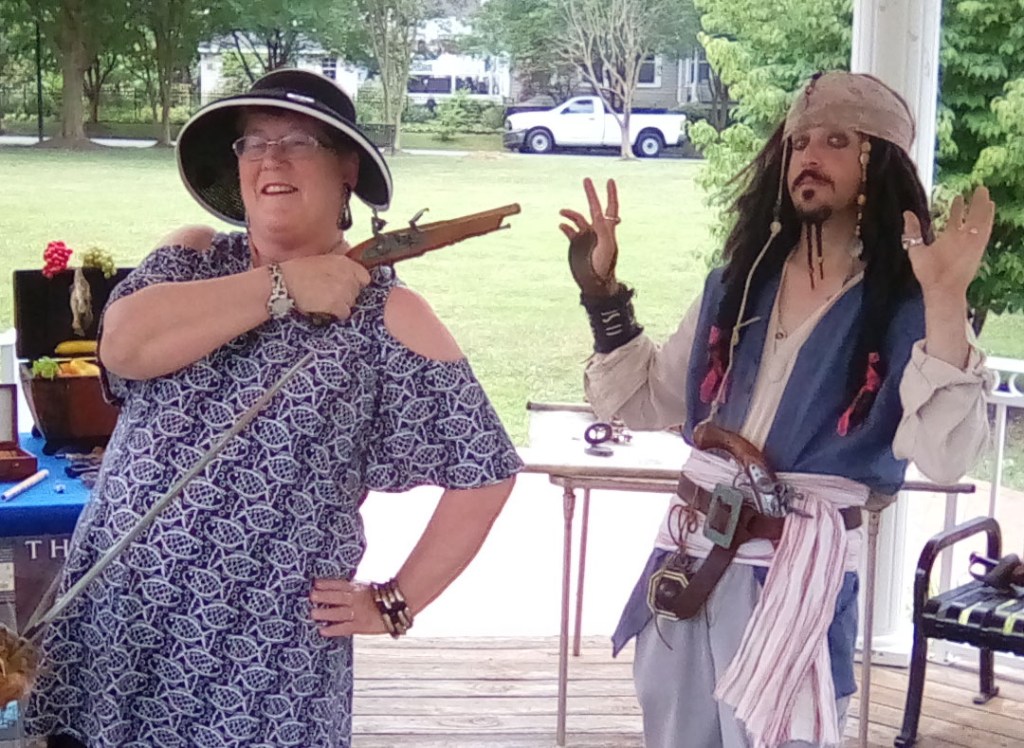 SPENCER — Young Buccaneers jumped aboard the Spencer Library Gazebo on June 16 and imagined old pirate tales as they listened to Captain Jack Sparrow and his Pieces of Eight Troupe.

Dressed as the Johnny Depp character from Pirates of Caribbean fame, this Jack Sparrow look-alike proved an authentic copy who was full of pirate lore and history. Wee mateys, toddlers and primary pirates — ages 6 to 10 — were dressed in costumes and given eye-patches and bandanas.

Captain Jack showed the audience compasses, ropes, swords and guns which were historically accurate. He told stories of Blackbeard, Charles Vane and many other real-life pirates of the 1600-1700’s. Captain Jack showed the children seafaring ways to tie knots and simulated the loading and firing of air cannons. At the end of the time with Captain Jack, he told tales of female pirates and River Pirates.

After one rousing tug-of-war team game, everyone craved  frozen popsicles and goldfish crackers. Many cooled off afterwards by checking out the library’s new books on Blackbeard and other new additions. Several new patrons signed up for library cards.

Please come join the, library pirate ship, Jolly Spencer and sail the seas of fantastic summer reading. This event was planned to kick-off the library’s summer reading program which begins today at 4 p.m.

The program will feature Kim Sheeks, known as the Hat Lady, who will read several pirate tales for primary pirates (ages 6 to 10). Pirate Bingo will be the game for this week and this week’s craft will be making foam pirate hats.

If your child is interested in joining us every Thursday this summer through the end of July, then call Spencer Public Library at 704-636-9072 to register. Wee Mateys — ages 2 to 5 — will be participating in the Summer Reading Program on Fridays at 10 a.m. starting on July 6. The program will feature silly games, pirate songs, puppets, pirate ships and more.