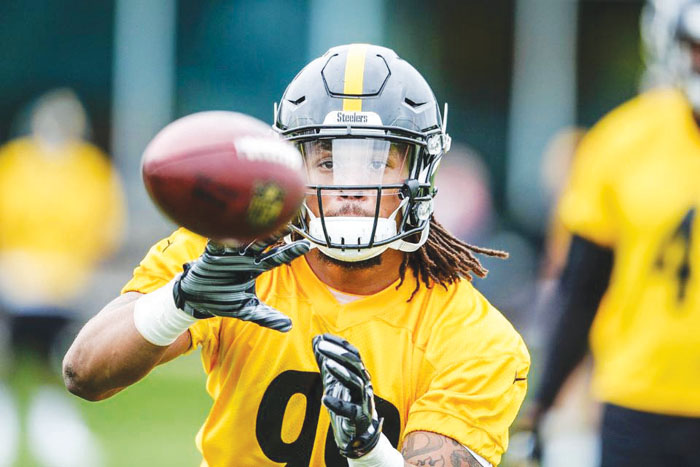 Steelers.com photo ... Keion Adams (99) goes through drills at the Pittsburgh Steelers’ rookie mini camp on May 12, 2017. Adams was a three-sport at Salisbury High School and played college football at Western Michigan.

LATROBE, Pa. — Most days, Pittsburgh Steelers outside linebacker Keion Adams runs and runs some more, but on Saturday he’ll walk.

Western Michigan University commencement ceremonies are Saturday in Miller Auditorium in Kalamazoo. Adams will be part of the graduation festivities.

When Adams was a senior at Salisbury High in 2013, he thought the WMU coaches who were recruiting him were kidding when they started talking about Kalamazoo. It sounded like a made-up place, a fairy-tale Walt Disney city, but Kalamazoo changed Adams’ life. Now he’s on the cusp of nailing down a full-time job in the NFL, and in a few days, the criminal justice major will officially be a college graduate.

“I got hurt in training camp with the Steelers last year, but it wasn’t a year that I wasted,” Adams said. “I had opportunities to finish up the classes I needed to get my degree. I knew I needed to get it done right now, that the longer I waited, the harder it was going to be to go back to school, and so I did it. I’m proud of the degree. I grew at Western Michigan in a lot  of ways.”

Adams didn’t redshirt at Western Michigan. The Broncos needed depth immediately, so he was just a contributor his first two seasons. He burst into stardom as a junior and senior, accumulating 28 tackles for loss and 13 sacks in two seasons. Western Michigan’s rise to national prominence mirrored that of Adams. The Broncos were 13-1 his senior season in 2016 and 15th in the final AP poll.

A defensive end in college, Adams, who turned 23 a few weeks ago, was perceived as a modest pro prospect coming out of WMU, a tweener, too small to play defensive end in the NFL and inexperienced at linebacker. But there were no  questions about him being athletic enough to compete at a high level. At 6-foot-2, 245 pounds, Adams runs a 4.7 40 and has a 36-inch vertical leap.

The Steelers drafted him in the seventh and final round, the 248th overall pick.

Adams performed well in last year’s rookie mini-camp and in Organized Team Activities (OTAs). But about halfway through  last summer’s training camp, Adams suffered an injury to his left shoulder.

It happened in the Steelers’ annual “Friday Night Lights” practice at Latrobe High’s Memorial Stadium.  It was early August, a big night. ESPN’s SportsCenter On the Road was broadcasting live from the stadium, and thousands of hardcore Steeler fans were in attendance.

There was a pretty basic drill, with Adams matched up with a tight end one-on-one.

“We just got tangled up, and I went forward but my shoulder sort of stayed behind,” Adams said. “I knew it didn’t feel right, but I’d never really been seriously injured before, so I didn’t expect it to be as bad it was. I finished the drill, but I was in pain.”

When he couldn’t extend his left arm after the drill, sought out trainers.

Adams had a realistic chance at making the 53-man roster before the injury. There was initially an optimistic view from the training staff that rest, ice and rehab might get him back on the field in a matter of weeks. But the shoulder didn’t respond to treatment. Surgery — season-ending surgery — was the only alternative.

There were sleepless nights for Adams. The Steelers had two options — make an injury settlement with Adams and release him or place him on Injured Reserve (IR) and continue to pay him his full salary as if he were healthy.

The Steelers opted for the latter course of action, confirming they believed Adams was part of their future. That was confidence booster.

“In my mind, I’d done enough, but I still wondered if I’d shown enough on film,” Adams said. “I was wondering if my dreams were going to be derailed when I was so close to achieving them. It was a relief when the Steelers wanted to keep me around.”

Adams underwent shoulder surgery last Aug. 28. That led to a long 2017 season for him, but one that he strived to turn into a positive experience.

“Being injured, being on the sidelines, was a new experience,” Adams said. “In high school and college, I only missed like two games in an eight-year span, so this was all new. I got good advice from Sean Davis (a Steelers safety who had come back from a shoulder injury). He said to treat it like a redshirt year, and that’s what I did. I tried to do everything with the team. I was at practices and I attended position meetings. I studied tendencies and I studied formations. I learned a lot of details, a lot of small things. My coaches and my teammates kept my spirits up.  There was never a dull moment and I laughed a lot with our linebackers. There was never a day when I didn’t feel like I was part of the team.”

The Steelers didn’t draft any linebackers this year, a quiet vote of confidence for Adams.

“I noticed that, but I wasn’t really worried about who we might draft,” Adams said. “All I’ve been worried about is taking care of my body and being in the best shape I can possibly be in.”

Adams’ experience from 2017, as limited as it was, benefits him as he strives to make this year’s 53-man opening day roster. While he’s just a rookie on the field, he has a year under his belt as far as learning defensive assignments. There’s also less traffic in front of him than there was in 2017. He has a clearer path to making the team.  T.J. Watt and Bud Dupree are the returning starters at outside linebacker. Anthony Chickillo is a veteran reserve. After that, it’s Adams and some free-agent types. Adams just has to prove that he’s healthy.  He’s second team on the depth chart.

“My shoulder has felt fine since early May, a couple of weeks before we started OTAs (Organized Team Activities),” Adams said. “I’m 100 percent as far as the shoulder. And I’ve been able to tell a difference on the field this year as far as my experience. Things have slowed down some. I’ve been able to react more quickly than last year, without thinking, and that’s critical in this league.”

Backup linebackers are usually essential elements as far as special teams. Adams is ready to embrace that role, ready to be physical.

Training camp starts on July 25. Between now and then, Adams won’t be taking many days off. He’ll spend a little time enjoying  graduation, but then it will be back to work. Head coach Mike Tomlin has challenged all the Steelers to be in the best shape of their lives for this camp, and Adams has taken that challenge to heart.

“Being able to run all day is the best weapon you can have in the NFL, and I plan to be ready to attack training camp,” Adams said.

Adams could be joining Javon Hargrave in black and gold. Hargrave, an established defensive lineman in the league at  25, played at North Rowan High, Salisbury High’s biggest rival. The schools are 4.5 miles apart. Hargrave’s junior and senior seasons at North (2009-10) intersected with Adams’ freshman and sophomore seasons at Salisbury.

Salisbury won the 2A state championship in 2010 under coach Joe Pinyan, even with Adams missing the title game with an ankle injury. Salisbury won 33-15 against North that season, with Adams playing both ways. He rushed seven times for 62 yards against the Cavaliers, so Hargrave probably tackled him a few times.

Adams and Hargrave also tangled several times on the basketball court. In the winter of 2010-11, Hargrave’s senior season. Salisbury beat North two out of three, but North went on to win the 1A state championship.

Both local products are solid citizens and role models as well as high-level athletes. Adams earning his degree is just the latest evidence of that.

Now Adams just needs to make the team. If he does, there are going to be a lot of  Pittsburgh No. 99 jerseys sold in Rowan County.

Adams was hurt before the 2017 preseason games started, so those will be huge tests for him this time. He should get plenty of snaps, especially in the early ones. Pittsburgh’s opening preseason game is against the Super Bowl champion Philadelphia Eagles on Aug. 9. Pittsburgh concludes the preseason at home against the Carolina Panthers on Aug. 30.

“Growing up where we did, Javon and I know a lot of Carolina fans,” Adams said with a laugh. “So definitely looking forward to that one. We played the Panthers in Charlotte last year, but I didn’t get to make that trip.”

The NFL season will be here before you know it.