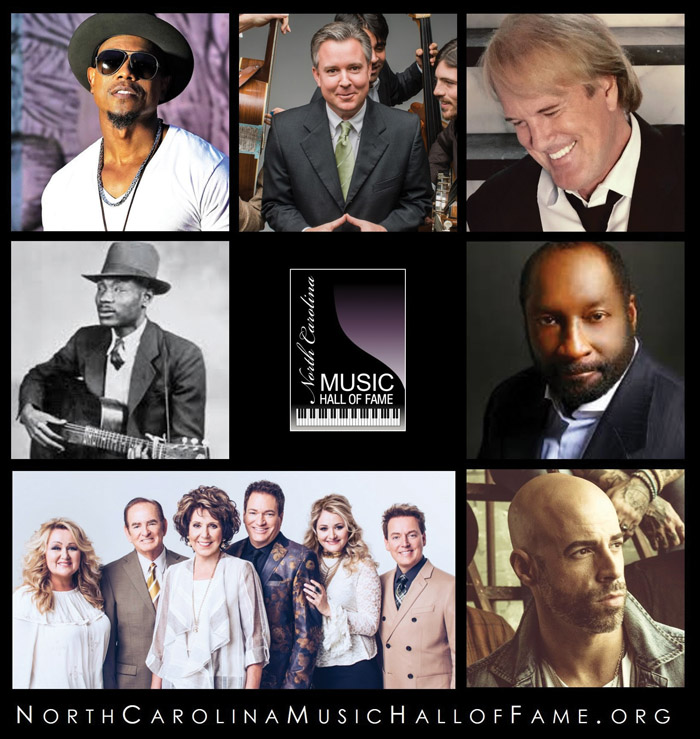 KANNAPOLIS — The North Carolina Music Hall of Fame will celebrate its 10th annual Induction Ceremony on Thursday, Oct. 18 at 7:15 p.m., taking place at the historic GEM Theater in Downtown Kannapolis.

Seven new artists will formally be inducted into the North Carolina Music Hall of Fame later that night. This event is open to the public and tickets are now on sale. VIP and general reserved admission tickets are available at www.NorthCarolinaMusicHallofFame.org
Induction night will feature a red-carpet walk, live performances, the acceptance of each induction, pre-ceremony VIP reception, and an after-party at the Hall of Fame Museum. Five of the seven inductees are scheduled to perform: Calvin Richardson, John Tesh, Luther Barnes, The Hoppers and Dolph Ramseur who will bring to the stage Ramseur Records recording artist David Childers.

Chris Daughtry – A semifinalist on the fifth season of American Idol from Roanoke Rapids. Chris is a Grammy-nominated singer, musician, songwriter, and actor. His hits include “Home,” “Feels Like Tonight,” and Grammy-nominated “It’s Not Over.”

Dolphus Ramseur – Born and raised in Concord. Record executive and founder of Ramseur Records, an independent record label in North Carolina, he has been responsible for the development of many successful recording artists including The Avett Brothers. Bombadil, David Childers, The Ruen Brothers and Steep Canyon Rangers are also currently on his label.

Luther Barnes – Born in Rocky Mount. The Stellar Award-winning and Grammy-nominated Gospel music singer, songwriter and producer is the lead singer for “Luther Barnes and the Red Budd Gospel Choir.” Luther currently has a national hit Gospel record, “God’s Grace.” He is also currently the lead pastor of the Restoration Worship Center in Rocky Mount.

Calvin Richardson – Born in Monroe. This multiple Grammy-nominated songwriter and producer is known for R&B hits such as “Keep On Pushin” and “I Am Calvin.”

The Hoppers – GMA Gospel Music Hall of Fame members from Madison. The Hoppers have been singing to global audiences for over 60 years from presidential religious inaugural ceremonies and New York’s Carnegie Hall to singing conventions and church platforms. They have won more than 50 awards and have eight number one songs along with multiple top 5 songs.

Blind Boy Fuller – Born in Wadesboro, this Piedmont Blues guitarist is famed for his finger picking style during the 1930s.

More about the North Carolina Music Hall of Fame: Its primary purpose is to recognize, promote and commemorate the musical heritage of the State of North Carolina. Musicians, singers, songwriters, music executives, and producers from all genres of music are honored annually and displayed at the museum, which is open to the public. It is located at 600 Dale Earnhardt Blvd.