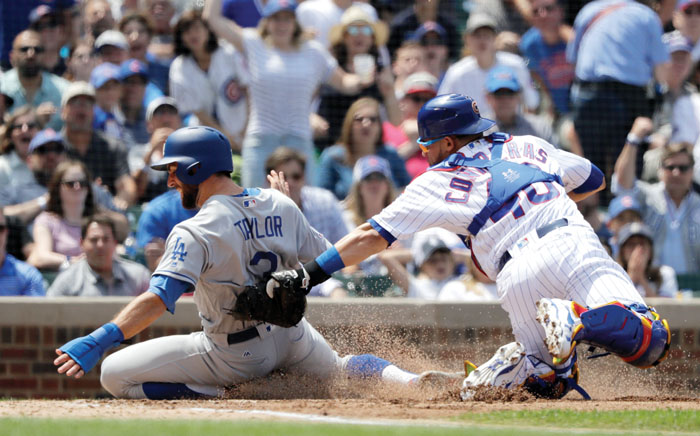 Chicago Cubs catcher Willson Contreras tags out Los Angeles Dodgers' Chris Taylor at home off a throw from right fielder Jason Heyward, to end the top half of the third inning of a baseball game Wednesday, June 20, 2018, in Chicago. (AP Photo/Charles Rex Arbogast)

Lester (9-2) gave up five hits over seven innings. Baez had two doubles, a triple and a steal. He also made some solid plays at shortstop and second base.

Kyle Schwarber hit his 14th homer, and Kris Bryant added two hits and an RBI. And the Cubs handed Ross Stripling his first loss since April 30, taking two of three in a rematch of the past two NL Championship Series.

Lester walked three and struck out one batter. Anthony Bass worked the final two innings to finish the six-hitter.

Happ (9-3) allowed four runs and six hits, walked none and struck out eight. He’s 4-0 with a 2.72 ERA in nine career starts against the Braves.

Happ retired 18 of 19 before Freddie Freeman and Nick Markakis hit back-to-back singles with one out in the ninth.

Ryan Tepera came on and gave up an RBI single to Kurt Suzuki, struck out Charlie Culberson, then allowed an RBI single to Ender Inciarte, putting the tying run at second. Tepera finished it by getting Johan Camargo to fly out, earning his fifth save in eight opportunities

Morales, who turned 35 Wednesday, went 2 for 3 and scored twice. He homered in the first, walked and scored in the fourth, singled in the fifth, and flied out in the eighth.

Herrera ripped a 91 mph slider from Sam Tuivailala (1-3) off the scoreboard on the facing of the second deck in right field to give the Phillies a 4-3 lead. Herrera has a homer in four straight games.

Yadier Molina hit a pair of homers for the Cardinals off Phillies starter Jake Arrieta.

Edubray Ramos (2-0) got five outs and Adam Morgan retired the last two batters with the tying run on second for his first career save. The Phillies took two of three to win a series against the Cardinals for the first time since August 2014.

Reigning AL Cy Young winner Kluber (11-3) allowed only a second-inning single past third base by Omar Narvaez and a third-inning walk to Charlie Tilson in seven dominant innings. The right-hander struck out seven and retired the last 14 batters before giving way to George Kontos to begin the eighth. Josh Tomlin surrendered a double to Jose Abreu in the ninth before completing the combined two-hitter.

Kluber now has one more victory than Washington’s Max Scherzer and the Yankees’ Luis Severino.

Barreto and Phegley went back-to-back with their first homers of the season in the second inning off left-hander Joey Lucchesi (3-3), who had been on the disabled list for more than a month.

CINCINNATI (AP) — Scooter Gennett hit a tying two-run homer, and Eugenio Suarez also connected on the next pitch — a hit originally ruled a double but changed to a homer on review — and Cincinnati swept the two-game sweep against Detroit.

Tyler Mahle (6-6) overcame a pair of solo homers to remain unbeaten in four June starts. The rookie has allowed four earned runs while going 3-0 in the month. He struck out eight in six innings.

The Reds managed only a pair of singles through the first five innings before getting to Michael Fulmer (3-6). Gennett connected with two outs for his 13th homer, tying it 2-2. Suarez hit Fulmer’s next pitch to left field, with the ball landing on the top of the wall and bouncing back into play.

The Reds sounded their home run siren and shot off fireworks, but the umpires ruled the ball was in play and stopped Suarez at second base. After a review of 1 minute, 12 seconds, the hit was ruled a homer — replays indicated the ball skipped off the top of the wall and deflected off a railing behind it.

Derek Holland (5-7) had seven strikeouts and allowed three runs over six innings in his first start against the Marlins since 2011. Hunter Pence had a pair of RBI singles to snap a 1-for-18 slump.

Unlike the first two games of this series that were marked by flaring tempers and alleged beanballs, the finale was tame. What fireworks there were came primarily in the sixth when San Francisco chased Miami starter Jose Urena (2-9).

The Marlins scored twice in the ninth off Sam Dyson. Reyes Moronta struck out JB Shuck for his first career save. Castro drove in a pair of runs and Brian Anderson had three hits for Miami, extending his on-base streak to a career-high 18 games.

NEW YORK (AP) — Giancarlo Stanton lined a two-run homer with two outs in the bottom of the ninth inning, and the New York Yankees erased a five-run deficit to beat the Seattle Mariners 7-5 on Wednesday night.

Gary Sanchez tied the score with a two-run homer in the eighth, and the Yankees went on to complete their largest comeback victory of the season.

Didi Gregorius singled with two outs in the ninth and Stanton hammered an 0-2 breaking ball from reliever Ryan Cook (1-1). The slugger knew it was gone the moment he connected, and he took a little jump at home plate and pumped his arm before tossing his bat aside and circling the bases.

The drive traveled a projected 453 feet to left-center for Stanton’s first walk-off homer with the Yankees — his previous one came in April 2014 for the Marlins (also vs. Seattle). He was mobbed by teammates and doused as he crossed the plate, throwing his helmet into the air and smiling from ear to ear.

“I’m not worried about my personal signature moment,” Stanton said. “Just happy to be able to get it for us.”

New York is a season-high 27 games above .500 with the majors’ best record at 49-22. The Yankees have won nine of 11 against Seattle (46-28) and will try for a three-game series sweep Thursday afternoon.

“Until the game is over, we’ve got a chance. It showed tonight,” Stanton said.

Aroldis Chapman (3-0) pitched a perfect inning for the win.

The Mariners have lost three straight for the first time since April 17-19 against the World Series champion Astros.

MINNEAPOLIS (AP) — Robbie Grossman and Max Kepler homered to back an effective start by Lance Lynn as the Minnesota Twins beat the Boston Red Sox 4-1 on Wednesday night.

Grossman led off the bottom of the first with a solo home run and Kepler added a two-run shot off Boston starter David Price (8-5). Brian Dozier added a pair of doubles to help Minnesota win for the fourth time in five games.

Four relievers combined for four scoreless innings with Fernando Rodney securing his 16th save in 19 chances.

Price allowed the three runs on seven hits and a walk. He had given up just one home run in his previous five starts and seven total in 14 starts this season coming into Wednesday.

The Red Sox were 0 for 9 with runners in scoring position and are 2 for 22 in the first two games of the series. They’ve stranded 18 baserunners in the two games and lost for the fourth time in five games.

Lynn has had an uncharacteristic wild season in his first year with the Twins. He walked at least five batters for the fifth time in 14 starts. But the veteran right-hander has limited the damage and allowed less than three runs in five of his last six starts.

Boston’s lone run scored in the second as Lynn couldn’t catch first baseman Logan Morrison’s high throw to first for the final out of the inning, allowing Mitch Moreland to score from second base.

A return to production for Dozier and Kepler would be a boost for Minnesota.

Dozier had just one extra-base hit in his previous 13 games while hitting .068. His double off the left-field wall in the eighth plated Eddie Rosario.

Kepler hit his first home run in 22 games and the fifth of his eight this season against left-handed pitching. Kepler was hitting .158 over his previous 21 games with just four RBIs.

Red Sox: LHP Drew Pomeranz is getting closer to having his first throwing session since he went on the 10-day disabled list on June 5 for left biceps tendonitis. Manager Alex Cora said Pomeranz was dealing with soreness in his neck but has recovered.

Twins: Manager Paul Molitor said OF Byron Buxton’s first rehab game in Triple-A on Tuesday went well and that his left foot with the broken toe is “in a good place and we haven’t said that for about seven weeks or so.” There is no timetable for Buxton’s return.

Red Sox: RHP Rick Porcello (8-3, 3.70 ERA) will start the series and road trip finale on Thursday afternoon. Porcello pitched six innings and gave up four runs in a no-decision at Seattle in his last start.

Seattle starter Felix Hernandez lasted five innings and 95 pitches. He was charged with two runs, one earned, and six hits.

Sanchez drove Alex Colome’s cutter 439 feet off the back wall of the left-center bullpen, knotting the score at 5.

Dee Gordon had two RBIs for the Mariners. Denard Span and Ryon Healy each drove home a run in the fifth, extending Seattle’s advantage to 5-0.

Gregorius’ sacrifice fly in the seventh made it 5-3.

A moment of silence was held before the game for Billy Connors, a three-time Yankees pitching coach and confidant of late owner George Steinbrenner. Connors died Saturday, the team said. He was 76. Connors also served as vice president of player personnel from 1996 to 2012.

Mariners: RHP Hisashi Iwakuma (right shoulder surgery) remains in Arizona, where his first rehab start was pushed back due to soreness. He was scheduled to play catch Wednesday. … OF Guillermo Heredia was not in the starting lineup after batting just .122 this month, but entered as a defensive replacement in the seventh. “G is struggling a bit lately,” manager Scott Servais said. “Also, extra left-handed hitter in this ballpark (is) not a bad thing.”

Yankees: OF Brett Gardner (swollen right knee) ran and took batting practice before the game. He has not played since Saturday. “Feeling optimistic that it’s not going to be a DL thing,” manager Aaron Boone said. … Tanaka (two strained hamstrings) played catch and rode an exercise bike. … Jacoby Ellsbury is in Florida and might be getting close to resuming baseball activities, according to Boone. The outfielder has been sidelined all season by a string of injuries, including a strained right oblique, sore back, sore left hip and plantar fasciitis in his right heel.