In the Trenches: Marcus Corry, steadfast and caring 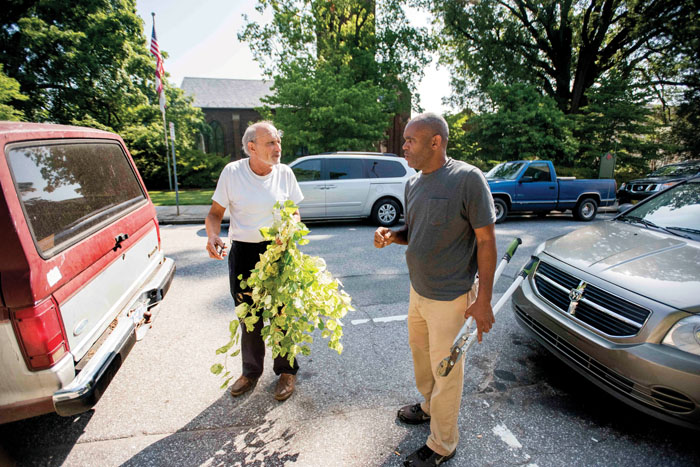 JON C. LAKEY / SALISBURY POST Marcus Corry (right) talks with Clyde (left) on Wednesday morning/ Corry has been the custodian at St. Luke's Episcopal Church on West Council Street in Salisbury for almost 30 years. Corry tends to the church grounds and other tasks. He has raked a lot of leaves that fall to the ground from the various trees on the property. One super huge willow oak on the property recently had a large limb fall to the ground. Corry joked that losing that limb got rid of "a million" leaves that he would had to deal with later in the fall, however he joked that still left him with several million more to look forward to. Wednesday, June 20, 2018, in Salisbury, N.C.

SALISBURY — “Rectors come and go, but Marcus Corry is forever.”

Davis Cooke, a St. Luke’s Episcopal Church parishioner, captured what everyone else seems to feel.

Marcus Corry has been the sexton at St. Luke’s for 30 years. He started in 1988 when he was 21 years old. A temp agency sent him for a six-week gig, and he liked it there. The church liked him, and the rest is history.

St. Luke’s nave was built in 1828, making it one of the oldest buildings in the county. It was the first church in the area to have an organ, and some of its stained-glass windows date back to 1882. Corry says the oldest part is the two center windows.

While it might be a big responsibility to care for such an old building and delicate windows, Corry takes it all in stride.

“I’ve been doing it so long, we know each other. I do my best when I’m changing lights not to lose the ladder. If I lost it, I’d have to just get on a plane,” he said with a smile.

People called for days to give testimonials for this story.

Corry flashed his trademark grin and said: “A lot of people in the community seem to know me. I’ve never been a millionaire, but I’ve met a lot of people.”

He lives, by his own admission, a simple life. He works at St. Luke’s, attends Jerusalem Baptist Church, and does a little mowing on the side.

“I’d just as soon go home and watch sports on television or go to a game, as anything else,” he said.

He’s particularly proud of his own church. As a trustee, he carries the keys to Jerusalem Baptist.

“I’ve got the keys to two churches in my pocket,” he said, smiling and patting his pockets.

Part of his job includes readying the fellowship hall for parties or receptions. Local artist Clyde is a member of St. Luke’s.

“He is a saint,” says Clyde. “I call him St. Marcus. He does more than anyone can know. Every time you turn around, some little lady is ordering him around. ‘Marcus, where’s the tablecloth? Marcus, get the punch bowl. Marcus, clean the punch cups.’ He does the garden at Canterbury House. He does the work of four to five people.

“… The whole congregation adopted him way back when. We all love Marcus.”

St. Luke’s is one of the few churches in town that keeps its doors open during the day.

“When I walk in, I look first to be sure I’m not disturbing anyone. People go through things and need to pray. If someone’s in there I just walk out and come back later.”

Once when he was closing the church for the day, Corry heard snoring and found a homeless man sleeping on the floor between pews.

“Had he not been snoring, I never would have known he was there,” Corry said.

He woke the man and told him it was time to leave. “He apologized, and I told him there was nothing to be sorry about.”

Before locking up, he walks up and down each row of pews, just to be sure he’s not locking anyone in.

Corry takes particular pride in being associated with St. Luke’s.

“All my days here are good. There are plenty of chances to go to something else, but I’m still here,” he said. “I would call our people kind and generous. Our new rector is full of energy. He’s good for the church — new ideas and full of energy. He’s bringing technology in. I saw that myself. I had a problem with my cellphone, and he fixed it in two minutes. Among all our old stuff here at the church, he is bringing new ideas.”

Surely much has changed over 30 years.

“I’m not sure it has changed, other than people. Many of the people who were here when I started have passed on. Lib Taylor, super nice. When I was talking to one of her granddaughters, all I could say was, ‘Super nice.’ I started helping with the antiques show because of her. I don’t know a lot about antiques, but I help.”

The cycle of life comes up again and again. At the recent wedding of John Sherrill and Lee Piper, Corry got to see her two children, Will and Belle. He hadn’t seen them in years.

“I’ve been here so long, I remember some who were small and are now in college or even married with kids. Liz Rankin’s daughter Anna now lives in D.C. with her husband. They came back to the church to visit. She remembered me. She is older but looks just the same as when she was young.”

He lightly prunes the legendary azaleas but does not do any major work to them. “If something bad went wrong, I’d have to leave town.”

The laugh lines around his eyes crinkled as he reflected on his environment.

“It’s peaceful here. Because I’ve been here so long, I know what my job is. “

“Marcus is a gentle soul, kind, thoughtful, dedicated and steadfast,” Hougland said. “The Hebrew word for steadfast, ‘hesed,’ is to be loving. Marcus has spent many years steadfastly serving the good people of St. Luke’s, quietly, faithfully helping her become ‘The Church That Feeds People.’”

“Marcus is the constant steady hand that everyone could rely on. He always seems to be a person who knows what needs to be done long before he is asked to do so. In nearly 20 years, I never heard a single person say an unkind word about Marcus,” Burgess said. “I think that says a lot about the strength of his character and the true caring person we all love.”

Corry’s four children are grown now, but as children they’d stop by the church now and then. Parishioners know them and love them. Marcus Jr., the youngest, attends Campbell University. He was active in the youth group.

Corry lends a hand to retired teacher Dinah Carpenter when she needs help. She taught three of his children in school.

“In my estimation, there are not many people I think as much of as Marcus,” Carpenter said. “He always helped at school and even went to Setzer School with my class every year. Dressed up with Clyde’s overalls. He helped with all field days, too. He is a wonderful caring son to mother, a loving dad, and helps with all his grandchildren.”

Corry works a 40-hour week but stops by the church just about every day. He opens the church in the morning and locks it at night. He opens it on Sunday mornings, attends the service at his own church, then swings by St. Luke’s to be sure it’s locked after everyone is gone.

He attributes his calm nature to his mother, Virginia Wheeler, and his grandmother, who has passed on.

“They taught me by example: Treat people how you want to be treated. You know as a young person, you don’t learn that right away, but then you realize that’s how it should be.”

The church’s current rector, Robert Black, is away on sabbatical but couldn’t miss the chance to talk about Corry.

“What makes Marcus such a gem isn’t that he does good work keeping up the beautiful campus of St. Luke’s, though he does, but rather he cares about the people of St. Luke’s,” Black said. “He’s made himself a part of the fabric of this parish because he knows what preachers so often try to get people to understand — the church isn’t the building, it’s the Body of Christ that assembles there.

“Yes, Marcus takes care of the building; but more than that, he takes care of the Body of Christ as he does his work of mowing the lawn or changing a light bulb or setting up chairs in the Parish Hall for an event.”

Thirty years doesn’t seem to be enough for Corry.

“I’ll be here until they’re tired of me or I can’t do it anymore,” he said. “Until the ladder gets too heavy. That’ll mean it’s time to go.”