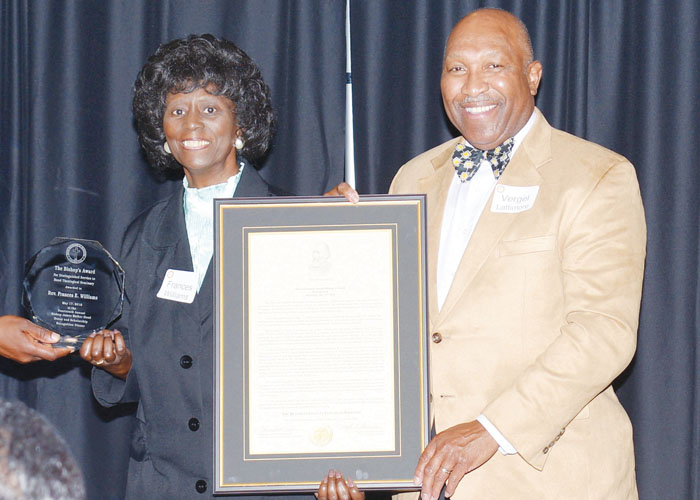 The dinner recognizes donors whose support reaffirms Hood’s mission and investment in the future of the church and society. Scholarship recipients were invited again this year to give them an opportunity to meet the donors who fund their scholarships.

The highlight of the evening was the presentation of the Bishop James Walker Hood Awards for Distinguished Service. This is the highest honor Hood Seminary bestows on donors, leaders and supporters. Hood President Vergel L. Lattimore thanked this year’s recipients for their financial support and contributions of time and talent to the mission of Hood Theological Seminary.

Williams, a native of Beckley, West Virginia, earned a bachelor of arts from the University of the District of Columbia and a master’s from Washington Trinity University in Washington.

She worked for the federal government and later taught high school social studies in the D.C. public schools before she retired in 2003. While in D.C., she became a member of Greater First Baptist Church. After relocating to Winston-Salem, she entered ministry by preaching her first sermon at Mount Zion Baptist Church in December 2007.

She was ordained in July 2010 and served Mount Zion as an associate minister. Following her relocation to Maryland, she reunited with Greater First Baptist Church, where she now serves as first female associate minister. She is affectionately known as “Rev. Sunshine” because of her sunny disposition.

Through her financial support and commitment to Hood Theological Seminary and her engagement with the alumni association, Williams has helped promote and fulfill its mission of preparing women and men for bold and creative leadership for the Christian church for a diverse world.

First United Church of Christ Foundation of Salisbury was established in 1996 by Salisbury resident Edith Alcorn, a longtime member of the church. Since then, the foundation has distributed more than $600,000 to nonprofit organizations in support of programs and projects that encourage constructive change, address social problems and nurture positive social relationships.

Hood Theological Seminary has been a beneficiary of the philanthropic generosity of First United Church of Christ Foundation for the past 10 years. The grants that have been awarded for scholarship assistance strengthen the seminary in its mission of preparing women and men for leadership of the Christian church for a diverse world.

The scholarships offer students an incentive to interrupt their lives, oftentimes foregoing established careers, to pursue a master’s level degree in theological education. Many of seminary students are called to the ministry later in life, with multiple financial responsibilities and commitments to family, employment, church and ministerial education. More important, student assistance helps graduates leave without being encumbered with significant education debt.