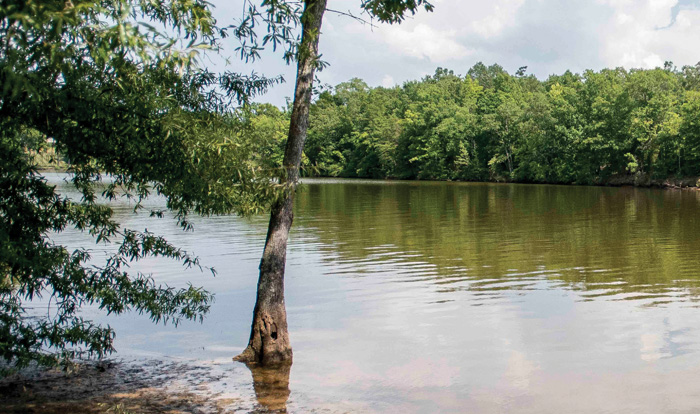 The property near Boat Club Lane as seen from across the water at the mouth of Church Creek was at the center of a rezoning request by the property owner for a dock building business. Jon C. Lakey/Salisbury Post

SALISBURY — A request to rezone four parcels along High Rock Lake resulted in a nearly two-hour discussion among the Rowan County Board of Commissioners on Monday.

The request came from Barry Childers, who sought to build floating docks and boat lifts by rezoning the property from rural agricultural to commercial business-industrial with a conditional use.

Rezoning the parcels would allow for construction of a 2,800-square-foot storage building and a fenced, gravel parking area for storage of construction materials and the property owner as well as the applicant’s personal boats and trailers.

The parcels neighbor High Rock Lake Boat and Ski Club, with parts of the Waters Edge subdivision across the water.

Seven residents of the subdivision spoke during a public hearing on the rezoning, each expressing concern about the proposed business.

Some spoke about the potential of noise from construction. Others worried that the rezoning would set a precedent for unwanted businesses in the area.

Husband and wife Jim Cartner and Kathryn Russ said they had both worked hard and saved to be able to retire at the lake.

“We do not need to hear all this noise and all this commotion,” said Russ. “This is not fair for all of those who have worked so hard all our lives just to get a peaceful retirement.”

As the commissioners heard more about the proposed project, additional concerns arose. Trees that were supposed to screen the project had been removed for grading, according to Childers. There would be no restroom on site, and the ground won’t support a septic system.

“I guess the question is, where are they going to go to the bathroom when they’re working out there?” Commissioner Mike Caskey asked.

Childers said he had a contract with Rowan Septic for portable johns.

A major concern for Commissioner Judy Klusman was a floating pile-driving barge for the construction, which could further clutter serene and scenic views, she said.

“I’m really concerned about this,” Klusman said. “I think this barge thing is a real surprise. I’m not comfortable at all with this whole situation.”

Commissioner Craig Pierce said the request reminded him of a similar request, also for the High Rock Lake area.

The request was for commercial business rezoning, and it was denied so the zoning ordinance could be updated, allowing for the proposed use in a neighborhood business.

Pierce said granting the rezoning request could start a trend in spot zoning for commercial development.

He said he didn’t see why the operation needs to be located across from Waters Edge.

“Out of all the property on the entire coast line of this lake, why does it have to be here?” he asked. “This neighborhood is an expensive neighborhood. … These people have spent a lot of money and built up our tax base to have and enjoy this lake. I don’t think it’s our responsibility to take them away from them.”

Vice Chairman Jim Greene said he had no problem with the proposal until he became aware of the grading and tree removal.

“I have some reservations now,” Greene said. “I hate to see any land go barren when somebody can take it and do something useful with it, but (that) … really changes the perspective of trying to have a building that would be compatible with the rest of the neighborhood.”

Chairman Greg Edds also said his perspective had changed regarding the project. At first, he said, he thought the project would not be a good fit given the proximity to Waters Edge. But aerial maps and a visit to the site changed his mind, he said.

“When I look at the aerial map and it’s separated by two businesses to the left, I think, ‘What in the world else is going on in there?” he said. “There is no one in this room only 75 feet away from this. I’m sorry.”

Edds said that no former commissions had paid attention to High Rock Lake or tried to leverage it as an opportunity for Rowan County.

“I’ve been harassed about trying to turn High Rock Lake into the diamond that I believe it can be,” he said. ” … This is hard because I have a heart for High Rock Lake and I’m one of the guys driving a call for change out there.”

Displeasure with the project was just the first of many growth problems the county is sure to see, Edds said.

The commissioners voted 3-2 to deny the requested rezoning.

Edds encouraged those concerned about High Rock Lake’s development to get involved in the discussion with members of an “unofficial” High Rock Lake committee.

“If you’re interested in High Rock and having a say in the direction it goes, we’ve got 12 to 15 folks that are passionate about it,” he said. “Come see me and let’s make you part of the discussion.”