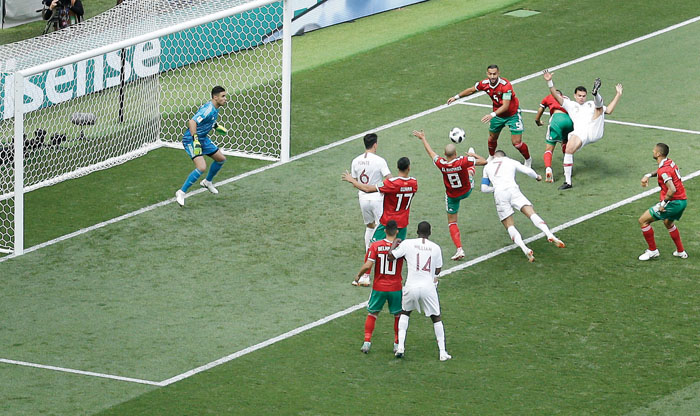 MOSCOW (AP) — Cristiano Ronaldo walked out for warmups at sun-splashed Luzhniki Stadium with diamonds affixed to each earlobe and a new goatee sprouting from his chin — like a goat, get it? Greatest of All Time.

He sparkled, even before the opening whistle of Portugal’s World Cup match against Morocco. And then he validated his flashy look with another glittering goal.

Gems removed, Ronaldo headed in Joao Moutinho’s cross after Bernardo Silva’s short corner kick in the fourth minute to become the career international scoring leader among European players, and followed with one of his look-at-me-me-me celebratory runs. Ronaldo’s tournament-high fourth goal stood up for a 1-0 win over a tenacious Moroccan team on Wednesday, putting the European champions in good position to advance to the World Cup’s knockout rounds.

Goatee and goals are turning this into Ronaldo’s World Cup at 33, past the age considered a soccer player’s prime,

“He’s like a port wine,” Portugal coach Fernando Santos said through a translator. “He knows how to refine his capacity and age at his best.”

Ronaldo’s competition with Lionel Messi is the great Millennial rivalry in sports, soccer’s version of Ali vs. Frazier, Bird vs. Magic, DiMaggio vs. Williams.

They’ve split the last 10 FIFA Player of the Year awards. Ronaldo has won four Champions League titles with Real Madrid in the past decade, Messi three with Barcelona.

Ronaldo covets attention. After the first of his three goals against Spain in Portugal’s opener last week, Ronaldo stroked his chin as he ran in celebration. Adidas is running an advertisement featuring Messi with a real goat.

No question Ronaldo works hard to be the best, whether it’s effort in training, nutrition to keep his body resembling Michelangelo’s “David” or ensuring proper rest.

“He does everything he needs to be better every day,” Portugal defender Cedric said.

Ronaldo’s 85th goal moved him one ahead of Ferenc Puskas into sole possession of second on the career international scoring list, trailing only Ali Daei’s 109 goals for Iran. He broke free of defender Manuel Da Costa and leaned low for a header from the top of the 6-yard box.

His celebration was a ballet that would have made George Balanchine proud. Ronaldo ran toward a corner flag, and pounded the number 7 on his jersey twice — not the team crest. He jumped and twirled his right hand three times before landing with arms spread like a seagull’s wings, mouth open.

“It was beautiful for me,” Ronaldo said after FIFA presented him with his second straight man of the match award.

He already has surpassed Pele and Diego Maradona in one measure. Ronaldo has an airport named after him — Aeroporto da Madeira, on the island near his birthplace in Funchal. There may be debate over the GOAT, but Ronaldo definitely is FNC — the airport’s three-letter code. He’s so notorious that when an odd-looking statue of Ronaldo by sculptor Emanuel Santos was unveiled at the airport’s renaming ceremony last year, it earned a lampooning by Kate McKinnon on NBC’s “Saturday Night Live.”

Later in the year, he dyed his hair gold before accepting the Ballon d’Or — golden ball. He hasn’t been available to discuss his scoring, or even his chin stroking and new fuzz. After the match, he walked past reporters without stopping while holding a mobile phone to an ear. Ronaldo later said during a television interview he didn’t shave his chin before last week’s game against Spain and promised teammate Ricardo Quaresma that if he scored he would keep the goatee throughout the tournament.

Long known for dousing his hair with gel, Ronaldo hopes to be part of a team that jells into a world champion. He helped the Portuguese reach the semifinals in his first World Cup in 2006 and led Portugal to its first major title at the European Championship two years ago in France.

Could Ronaldo stay at a high level long enough to play in a fifth World Cup in 2022?