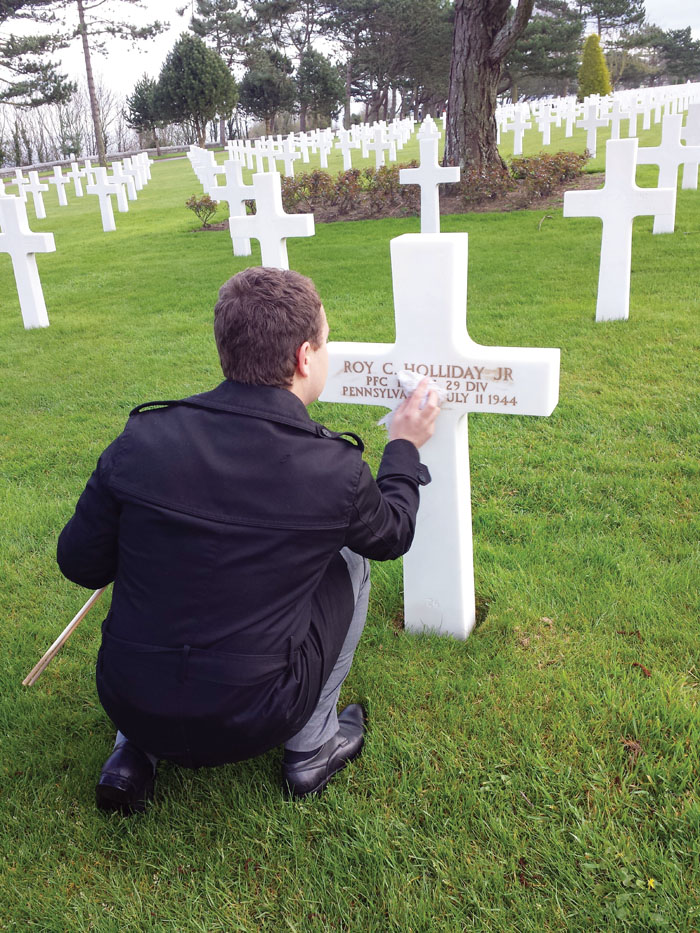 Richard T. Rogers, a retired law professor at Campbell University Law School, has an uncle buried at Normandy American Cemetery. An attentive French attendant at the cemetery puttied the wet sand into the inscription on the grave marker ‘to make a clearer photograph for your family records.’ Rogers shared this photo with columnist D.G. Martin. Photo courtesy Richard T. Rogers

When I was in France last week, Anthony Bourdain, also in France working on his popular and influential food and culture program for CNN, took his life.

Bourdain was in one of his favorite regions, Alsace, which was controlled by Germany for 50 years until the end of World War I.

I was on the other side of the country in Normandy, which was controlled by the English off and on for hundreds of years during the Middle Ages.

Both regions have much to brag about. Normandy’s iconic Mont St. Michel, for instance, rises out of the water like a big dream. “The English were never able to take it,” our French guide boasted.

The district’s Bayeux Tapestry tells the story of William, Duke of Normandy, and his conquest of England. The vibrant colors in the gardens of Claude Monet reflect the effervescent canvases that were a part of the impressionist movement.

While Bourdain was spending his final days exploring the special culinary and cultural offerings of Alsace, I was doing something similar in Normandy.

“Milk and butter” is the tagline the French apply to Normandy. They continue, “Normandy smells like cows.” Not like the adjoining region. “Brittany,” they say, “smells like pigs.”

When that high-fat, unpasteurized, Normandy milk is processed into creamy cheese and packaged in distinctive small round wooden cartons, the rich people in Paris pay big bucks (or should I say big euros) for the special and varying tastes of the multiple local brands of cheese from Normandy.

“Each batch is different,” the owner of a dairy farm and small cheese factory near the village of Camembert told me. “It depends on the season, what the cow has eaten, and other things.”

One of the surprising facts about Norman food, I bet Bourdain would have known, but I did not: Its wine is not good. “It’s too cool in Normandy to grow good grapes for wine,” the owner of a Normandy apple orchard and cider factory told me before cheerfully touting his cider that was fermenting in large oak barrels in his production and storage facility.

After he explained the production process of cider and brandy and complimented the six women employees who supervise the operation from beginning to end, he asked for questions.

Wondering, I guess, where the nearest migrant farm labor camp was, we asked, “Who do you get to pick your apples?”

“We don’t pick them,” the owner answered with a big smile. “We wait for them to fall. That is when they are perfect for our cider and brandy.”

All that said, and with due respect to Bourdain and the French love of food, the real power of my visit to Normandy was in another part of my gut.

Walking along Omaha Beach where our troops landed on June 6, 1944, I thought about their slogging through the water and onto the sand, through a broad barrage of German firepower, to the seawall and across, taking and holding a small perimeter from which they began the march through France and into Germany, where their victory secured for us today a life of freedom from the Nazi ideals of racism and tyranny.

Later, visiting the nearby Normandy American Cemetery where modest stones mark the graves of 9,385 U.S. military dead and then standing in the nearby Memorial Plaza and singing our national anthem and hearing the bugle play taps, my stomach tingled with sadness for those who made the ultimate sacrifice, with gratitude for those others who gave so much, and with pride for my country, the one we have because of what they gave.