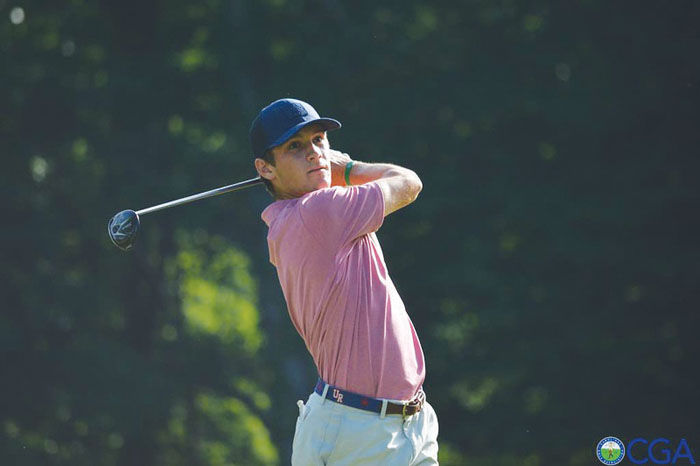 No. 2 seed Michael Childress, of Salisbury, and No. 3 seed, Brandon Einstein, of Clemmons, will face each other in one of the two semifinal matches today.

Childress faced a tough Round of 16 match against Tyler Dechellis, of Clayton, and went to extra holes with the younger golfer, but he ultimately won in 19 holes with a birdie. Childress said he had to remind himself to stay patient throughout the round.

“There were a couple of situations where I could have gotten a little nervous and not be comfortable, but I think I did a good job of believing that if I kept doing what I was doing, eventually it would work out,” Childress said.

In the quarterfinal match, Childress went head-to-head with No. 58 seed Thomas Deal, of Cornelius. Childress, a soon-to-be freshman at the University of Richmond, made several birdies in the middle of the round to gain momentum, coasting to a 4 and 3 victory.

Looking forward to the final day of competition, Childress said he is content with his shots off the tee, and looks to continue that tomorrow. For now, he’s just happy to advance after three long days in the summer sun.

“I’m a lot more tired than I expected,” Childress said. “It’s been a lot of golf, but it’s a good thing I’m still here. I’m excited and ready to go, and it will be fun.”

Childress gave credit to his Thursday caddie, friend and Cannon teammate Charlie Barr. Barr was also in the tournament before losing on Wednesday in the round of 32.

In today’s other semifinal match, Drew Hackett, of Charlotte, will take on Lansdon Robbins, of Davidson. Robbins, a teammate of Childress’ at Cannon School in Concord, defeated Connor Jones, of Raleigh. Hackett’s quarterfinal match against Noah Connor, of Reidsville, was close until the end, but he ultimately won 1-up.

Robbins will be a freshman at UNC Wilmington.

Einstein, a rising freshman at High Point University, first defeated Will Hawley, of Raleigh,  3 and 1. He then topped Andrew Wilmoth, also of Raleigh, 2 and 1.

After this morning’s semifinals, the final match will be played in the afternoon.

Entry to the tournament was open to any male amateur golfer between age 12-18, as of June 22 — who has not started college, is a legal resident of North Carolina, is a member in good standing of a club which is a member of the Carolinas Golf Association (CGA) and has a current USGA Handicap Index at a CGA member club that does not exceed 18.3.