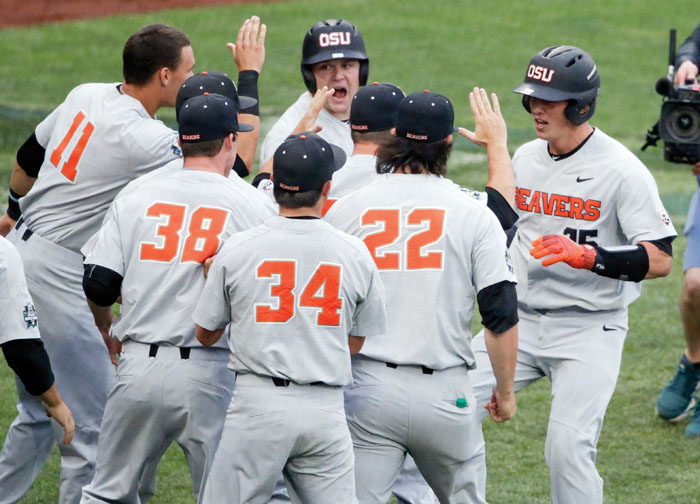 By ERIC OLSON, AP Sports Writer
OMAHA, Neb. (AP) — Oregon State was down three runs when a steady mist moved in at TD Ameritrade Park in the eighth inning Wednesday night.
Perfect conditions for a team from the Pacific Northwest.
“Every time we’re playing and it starts to rain, everyone looks around and says, ‘OK, we’re going to come back and do what we do at home,'” OSU shortstop Cadyn Grenier said. “When the rain comes, we know there’s a possibility of a storm coming — and that’s from us.”
The Beavers stormed back all right and knocked North Carolina out of the College World Series with an 11-6 win.
Brett Daniels walked in the go-ahead run after Adley Rutschman tied it with a three-run double. Tyler Malone hit his second homer of the CWS, and the Beavers’ third of the game, as Oregon State (51-11-1) built a five-run cushion and avenged Saturday’s 8-6 loss to the Tar Heels (44-20).
It was a stunning turnabout after the Tar Heels wiped out a 3-0 deficit to go up 6-3 in the sixth. North Carolina had been 37-0 when leading after seven innings and had won 50 straight when scoring six runs, the longest streak in Division I.
“Until that final out, we never feel we’re out of the game,” OSU star second baseman Nick Madrigal said. “That’s the way Oregon State baseball is. We’re going to fight to the end.”
North Carolina’s eighth-inning meltdown saw three pitchers walk four batters, one intentionally, and allow three hits.
No. 9 batter Zak Taylor started things off with a leadoff single. Madrigal, the No. 4 overall draft pick by the Chicago White Sox, followed with a base hit and Grenier won a 12-pitch duel with Joey Lancelotti to walk and load the bases.
“Zak Taylor got us going,” Madrigal said. “Sometimes it takes one hit to break it open. That’s the way baseball is.”
Rutschman followed with a drive to the center-field wall off Daniels (6-1) for his bases-clearing double.
“We were playing no doubles,” Carolina coach Mike Fox said, “but we would have had to be standing on the warning track to catch that ball.”
Daniels then walked two in a row, the first intentionally, to fill the bases again. Daniels ran the count full against Jack Anderson before walking him to force in Rutschman.
Carolina wiped out a 3-0 deficit in the third on Brandon Riley’s two-run double off Luke Heimlich and led 4-3 in the fifth on Ike Freeman’s single. Kyle Datres hooked Christian Chamberlain’s pitch just inside the left-field foul pole, putting the Tar Heels up 6-3 in the sixth.
Jake Mulholland (3-2) pitched three innings of shutout relief for the win.
“They were resilient, they were tough, they fought, they were tough — and they put up with my emotions,” Beavers coach Pat Casey said. “I ask guys all the time just be as competitive as you can possibly be. I’ve got to tell you it was a great comeback. They stayed with it.”
Heimlich, the two-time Pac-12 pitcher of the year, couldn’t make it out of the third inning for a second straight start in Omaha.
Heimlich’s appearance at the CWS had drawn mixed reaction from the public. Last year, he left the team for the super regionals and the CWS after it was revealed he had pleaded guilty to molesting a young relative when he was 15. The university allowed him to return to the team this year. He served two years’ probation and went through a treatment program but denied wrongdoing in recent interviews with Sports Illustrated and The New York Times.
North Carolina went 1-2 in its first trip in five years to the CWS.
“Well, the end of the season, it stinks,” Fox said. “It’s especially hard when you have really such a great group of kids. Probably not one of our most talented teams that we’ve had at UNC, but perhaps our most unselfish, toughest, grittiest, just determined to get here.”
Since 2013, the Tar Heels twice failed to make the NCAA Tournament and twice lost in regionals.
“For me, just growing up watching Carolina baseball, they’re in Omaha every year. Every year,” Datres said. “When I came in here the first couple of years, it wasn’t what Carolina was all about. To be able to get them back here, where we belong in Omaha, go out the way that we did says a lot. I think you will see more of the Tar Heels in the next couple of years.”
BEAVERS’ KWAN LIMITED
Oregon State All-Pac-12 center fielder Steven Kwan didn’t start after injuring a hamstring Wednesday against Mississippi State. Nick Madrigal took Kwan’s spot as leadoff man. Kwan pinch hit in the eighth and was intentionally walked, and Preston Jones pinch ran for him.
ERROR-PRONE OSU
Oregon State committed two errors against Carolina and has six in three CWS games. That’s as many as the Beavers committed in their previous 18 games. The Beavers had come into the CWS as the best fielding team in the field and seventh-best in the country at .980.
UP NEXT
Oregon State will play Mississippi State in a bracket final. The Beavers would need to win Friday and again Saturday to reach the best-of-three finals.
___
For more AP CWS coverage: https://apnews.com/tag/CollegeWorldSeries