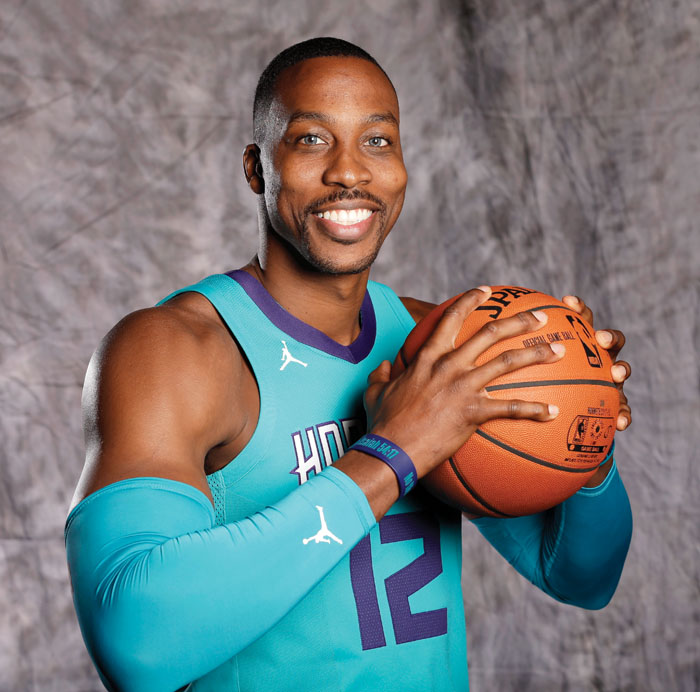 FILE - In this Sept. 25, 2017, file photo, Charlotte Hornets' Dwight Howard poses for a photo during the NBA basketball team's media day in Charlotte, N.C. A person familiar with the situation says the Charlotte Hornets have agreed to trade eight-time All-Star center Dwight Howard to the Brooklyn Nets for center Timofey Mozgov and two future second-round draft picks. The person spoke to The Associated Press on condition of anonymity Wednesday, June 20, 2018, because the teams have not announced the trade and the league has not yet approved it.(AP Photo/Chuck Burton, File)

CHARLOTTE (AP) — The Charlotte Hornets have agreed to trade eight-time All-Star center Dwight Howard to the Brooklyn Nets for center Timofey Mozgov and two second-round draft picks, a person familiar with the situation told The Associated Press on Wednesday.

The Hornets will get the Nets’ second-round pick Thursday night (45th overall) and a second-round pick in 2021, the person said. The person spoke to the AP on condition of anonymity because the teams have not announced the trade and the league cannot approve the deal until the trade moratorium ends on July 6.

The 32-year-old Howard played only one season for Charlotte, averaging 16.6 points and 12.5 rebounds per game. He is due to make $23.8 million this season, the final year of his contract.

Brooklyn will be Howard’s fourth team in as many seasons. He had pushed for a trade from Orlando to the Nets during the 2011-12 season in hopes of joining Deron Williams, then changed his mind and recommitted the Magic, who instead dealt him to the Lakers that summer.

After later spending three seasons with the Houston Rockets, Howard was acquired by his hometown Atlanta Hawks in 2016 as a free agent and signed a three-year contract. But he wore out his welcome after one season and was dealt to Charlotte. The Hornets, in the midst of a major organizational shake-up, having already replaced their general manager and coach, could be on the verge of shaking up their roster, too.

Howard struggled to mesh with guard Nicolas Batum, and the Hornets failed to make the playoffs despite what former coach Steve Clifford considered the team’s most talented roster in half a decade.

This is a reunion of sorts for Mozgov. Recently hired Hornets general manager Mitch Kupchak signed Mozgov to a four-year, $64 million deal in 2016 when both were with the Los Angeles Lakers.

While the move allows the Hornets to unload Howard’s contract and save about $7 million under this year’s salary cap, it is a bit of a gamble because Mozgov has two years remaining on his current deal at $16 million per year.

He played in only 31 games last season for the Nets, averaging 4.2 points and 3.2 rebounds. Acquired along with D’Angelo Russell, Mozgov began the season in the starting lineup but quickly fell out of the rotation entirely on a team that preferred to play small and shoot 3-pointers.

The 7-foot-1 Mozgov has not played a full 82-game season since 2013 and has averaged in double figures only once during his eight-year NBA career. By contrast, Howard has averaged 17.4 points, 12.7 rebounds and two blocks per game since joining the league in 2004.

His rim protection should help what has been a poor defensive team and he could help in the pick-and-roll with Russell and Jeremy Lin, but the biggest incentive to the Nets is likely for salary reasons with Howard’s contract expiring after next season.