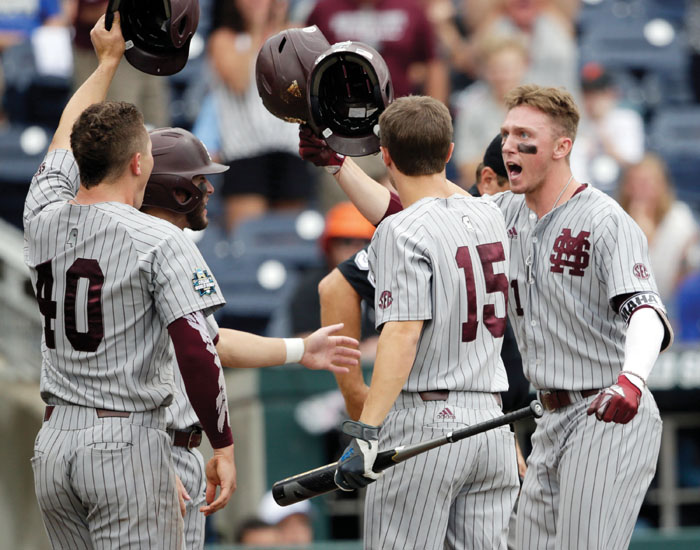 The Bulldogs (39-27), with two wins at the CWS, are off until Friday. Win then or on Saturday, and they’ll be playing for the national championship next week.

This game was all about Westburg, the freshman who two weeks ago came up with the “Rally Banana” that’s become the Bulldogs’ good-luck charm in the NCAA Tournament. His seven RBIs, on the slam in the second inning and three-run double in the eighth, tied a CWS record.

“I think we had a good banana today. That’s all I can say,” Westburg deadpanned.

Westburg crushed a breaking pitch Austin Bergner left hanging, and the ball landed in the seats above the left-field bullpen for a 4-1 lead.

When Westburg returned to the dugout, a teammate handed him his Rally Banana.

Westburg came up with the Bulldogs’ alternate mascot during a regional game against Oklahoma on June 3. The Bulldogs were struggling when he went into the tunnel and grabbed a banana. Instead of eating it, he put it on his head in hopes of turning the Bulldogs’ luck. It must have worked. Mississippi State won, Westburg and his banana got some TV time, and the meme took off.

Since then, Westburg has been the curator of the fruit. (No, it’s not the same banana every game.)

He’s put sunscreen and bug spray on it. He’s wrapped one in a towel, as if it were releaxing at a spa. Sometimes Westburg or a teammate puts the banana up to his face like a mustache; other times it’s a faux radar gun.

A couple Mississippi State fans have been dressed up in banana outfits, others wear Rally Banana T-shirts, and the Bulldogs have received best wishes from banana producers Dole and Chiquita.

“If you’re going to do all the shenanigans in the dugout,” Westburg said, “you might have to step it up on the field and back that up. It was nice to do that today.”

MSU interim head coach Gary Henderson said the Rally Banana offsets the pressures of the postseason, so he’s all for embracing the fun of Westburg’s fruit.

“He’s got to make the phone call on the banana, right?” Henderson said. “You’ve got to be able to do those things and become somebody different when you’re in the box. He’s an intense kid. Super intense. He’s not a goofball. When he finds a way to let some of the air out a little bit and enjoy it and have some fun, and not grind, grind, grind.”

After Westburg’s slam, Bergner (7-3) retired 16 in a row until the start of the eighth inning, when the Bulldogs converted six hits, a walk, a hit batter and two errors into eight runs.

“Well, the good news is we get to play again,” Carolina coach Mike Fox said. “You’ve got to turn the page pretty quickly out here. I don’t think any of us will want our season to end on that performance, but you’ve got to give Mississippi State credit.”

Carolina’s Kyle Datres doubled leading off the game against Konnor Pilkington (3-6) and came home on a sacrifice fly. The Tar Heels (44-19) didn’t score again until the seventh.

It’s been an improbable run for the Bulldogs so far. Andy Cannizaro resigned on Feb. 20 for off-field conduct, pitching coach Henderson took over on an interim basis, and the Bulldogs got out to a 14-15 start and lost seven of their first nine Southeastern Conference games.

Thanks to Westburg’s grand slam and Carolina’s eighth-inning meltdown, no fantastic finish was needed this time.

Oregon State’s KJ Harrison hit the previous grand slam at the CWS against LSU exactly one year ago. Mississippi State’s only other slam in 10 CWS appearances was by Bobby Thigpen, against Miami in 1985.

Mississippi State right fielder Elijah MacNamee lost track of a short fly ball off the bat of Ashton McGee in the seventh inning. MacNamee ran in too far, realized what he had done and backtracked as the ball fell to the ground. McGee ended up on third with a triple, and that ended Pilkington’s day. McGee scored on reliever Cole Gordon’s wild pitch.

Mississippi State plays Friday against Oregon State or North Carolina. A win Friday or Saturday would send the Bulldogs to the finals starting Monday.