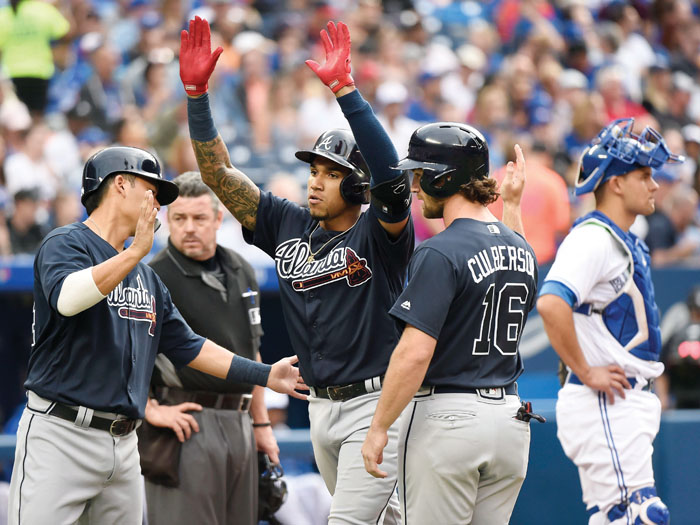 TORONTO (AP) — Johan Camargo came up big from the bottom of the Atlanta Braves’ lineup.

The No. 9 batter hit his first career grand slam and went 4 for 5 with five RBIs, and the Braves beat the Blue Jays 11-4 on Tuesday night to snap Toronto’s home winning streak at seven games.

“This team is just really good up and down the lineup,” Camargo said through a translator.

Camargo hit his seventh home run off Jaime Garcia (2-6) in the second, singled in the fourth, hit an RBI single in the fifth and doubled and scored in the eighth. He struck out in the ninth.

Culberson hit a solo homer and Inciarte had three hits and three RBIs as the Braves won for the sixth time in seven games. Reliever Sam Freeman (2-3) worked 2 1/3 innings for the victory.

Making his first start in Canada, Calgary-born right-hander Mike Soroka was replaced one out from qualifying for the win.

“He threw some good sinkers but a lot of stuff was right down the middle,” Snitker said.

Soroka took a no-hitter into the seventh inning of his previous outing, June 13 against the New York Mets, but started this one by giving up a double to Blue Jays outfielder Curtis Granderson.

Toronto put runners at second and third with two outs in the first but left-fielder Culberson made a great running catch on Kevin Pillar’s line drive before crashing hard into the video board section of the outfield wall. Culberson went down briefly but stayed in the game.

“That’s one of the first holy cow plays I saw,” a grateful Soroka said. “I definitely owe him dinner.”

Garcia retired the first five batters in order before Kurt Suzuki’s double in the second. Culberson and Inciarte walked and Garcia fell behind 2-0 on Camargo before giving up a towering shot that landed in the third deck.

HOUSTON (AP) — C.J. Cron homered early and Wilson Ramos hit a tiebreaking RBI single in the eighth inning to lift the Tampa Bay Rays to a 2-1 win on Tuesday night to snap a 12-game winning streak by the Houston Astros.

Blake Snell (9-4) allowed just three hits and one run in seven innings, but had to pitch around a career-high seven walks for his fifth straight win. Sergio Romo pitched for the third straight game, taking over with one out in the ninth and allowing one hit for his third save a night after blowing the save in Houston’s 5-4 win.

Miguel Andujar and Aaron Hicks each belted a two-run shot off Marco Gonzales (7-4) in the fifth. Hicks homered for the third straight day and finished with three hits from the leadoff spot as the Yankees boosted baseball’s best record to 48-22, moving a season-best 26 games above .500.

Coming off a four-hit game, Stanton sent a solo drive to straightaway center field in the first. Aaron Judge had an RBI single in the seventh, and rookie phenom Gleyber Torres added his 14th home run in the eighth.

CHICAGO (AP) — Albert Almora Jr. hit a game-ending RBI single in the 10th inning, and the Cubs beat the Dodgers 2-1 to salvage a split of their day-night doubleheader.

Kris Bryant sparked the winning rally with a leadoff triple against Brock Stewart (0-1). After Javier Baez was walked intentionally, Almora hit a liner into right field.

The rematch of the last two NL Championship Series was set to begin on Monday night, but the opener was postponed by a mixture of poor weather and a limited power outage at Wrigley Field. It’s the only scheduled visit for Los Angeles, leading to the day-night doubleheader.

Los Angeles began the long day at the iconic ballpark with a victory on pinch-hitter Kyle Farmer’s two-run double in the ninth.

WASHINGTON (AP) — Trea Turner went 4 for 4 with a homer, Anthony Rendon drove in three runs and the Nationals extended their recent domination of the Orioles.

Adam Eaton had two hits and two RBIs for the Nationals, who trailed 5-1 in the fifth inning before rallying to make it six straight wins over Baltimore. Washington is 4-0 against its neighboring interleague rival this season, outscoring the Orioles by a combined 20-8.

Peralta (2-0) struck out seven without issuing a walk, surrendering only singles to Corey Dickerson and Colin Moran in the fourth but otherwise keeping the Pirates firmly in check.

Sal Romano (4-7) had a second straight solid outing, limiting the Tigers to four singles over seven shutout innings. Billy Hamilton also homered as the Reds pulled away to a 9-0 lead.

CLEVELAND (AP) — Mike Clevinger struck out 10 and allowed one run in 7 2/3 innings, and the Indians defeated the White Sox.

Clevinger (6-2) beat Chicago for the third time this season and was in command after giving up a first-inning run. The right-hander retired 13 straight between the second and sixth while allowing five hits.

PHILADELPHIA (AP) — Matt Carpenter hit a tiebreaking solo homer with two out in the ninth, helping the Cardinals edge the Phillies.

MINNEAPOLIS (AP) — Eduardo Escobar hit two go-ahead doubles, a two-run delivery off Chris Sale in the sixth inning and one that sparked a four-run eighth for the Twins in a victory over the Red Sox.

Robby Scott (0-1), just recalled from Triple-A, relieved Sale to start the eighth and walked the first two batters. Joe Kelly entered, and Escobar’s one-out line drive bounced in front of Jackie Bradley Jr. and skipped past the center fielder as two runs scored. The official scorer later changed his ruling from a single to a double, giving Escobar a majors-leading 32 for the season. Robbie Grossman broke the game open with a two-run triple.

Zach Duke (3-2) got the win despite giving up the tying run in the eighth.