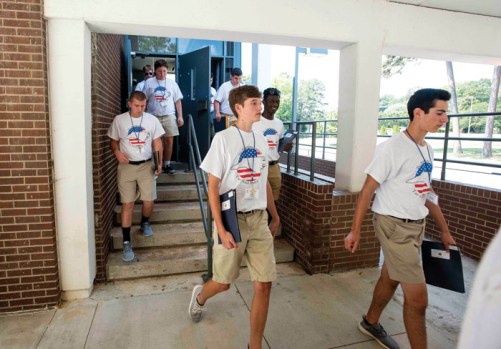 Members of the Nationalist Party transition to their next meeting at Tar Heel Boys State. Jon C. Lakey/Salisbury Post 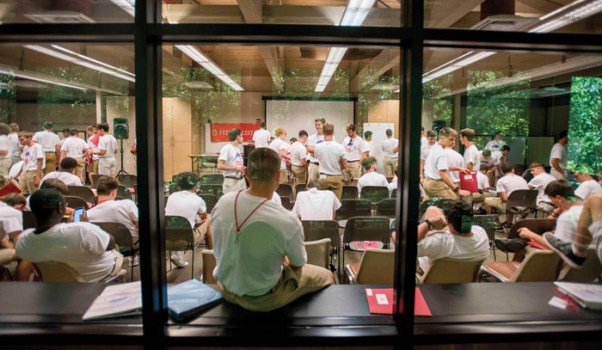 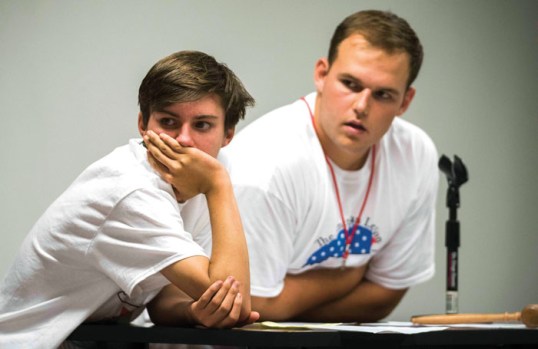 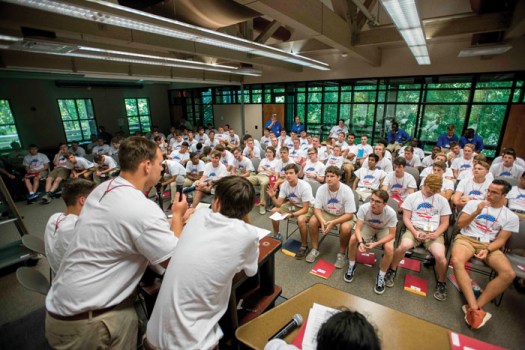 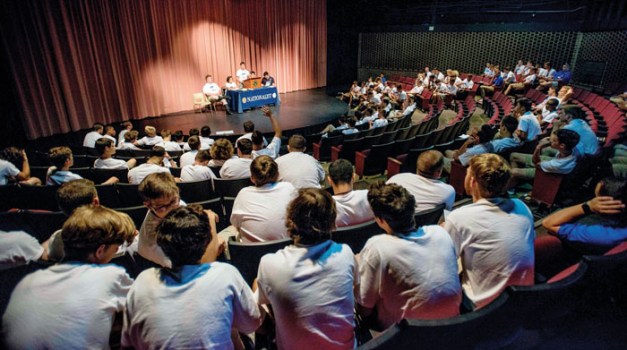 The members of the Nationalist Party gather in Hedrick Little Theater to discuss their platform. Jon C. Lakey/Salisbury Post

SALISBURY — This week, rising seniors from across North Carolina are taking part in the 79th annual session of Tar Heel Boys State.

Boys State, an annual assembly sponsored by the American Legion, is held all over the country to teach young men about government and to groom future leaders.

“I didn’t really know what to expect when I got here, but it’s just been so amazing,” said Alex Kanekelides, a student at Thales Academy in Apex. “My dad is a really big political junkie, so that’s kinda where I get it from. And my grandfather went to Boys State.”

“I would say that this has been one of the most amazing experiences of my life,” said River Collins. “I’ve felt a great family-like atmosphere in my city, a great camaraderie, really like a brotherhood, and it’s been a lot of fun campaigning, collecting signatures to run for governor.”

“We’re rated as one of the best programs in the nation, and we strive to be that. And I think that it shows in the amount of people who come back and the dedication they put into that,” said Christopher Byrd, the project coordinator.

“I’m extremely interested in applying to one of the three major service academies, and it is almost paramount that you go to Boys State to go there,” said Campbell Woody.

Boys State is home to many distinguished alumni, including musicians, athletes and politicians such as Bill Clinton and Dick Cheney.

“I just think that … if people whenever they’re younger can come to Boys State and experience this, then many years later, maybe even decades, come back and speak on behalf of the program, I think it really shows that it was a cornerstone and a stepping stone in their life and pivotal to making them who they are,” Collins said.

“I think I’ve learned a lot about campaigning, a lot about people, but also a lot about the political process because in some senses it’s not about the structure. It’s more about the the political process and, in some senses, it’s more about how the meetings go and day-to-day stuff,” said Kanekelides. “There’s a certain routine to it. … But once you get into it, you start to understand how the procedures work and also from that, how certain bills get passed and created, and that’s interesting.”

“One thing I’ve learned is how much orchestration goes into who runs for what and how much power certain members of the party, not the actual government itself, have,” said Woody.

“The experience will definitely apply to multiple field,” Woody said.

“One of our objectives is to develop civic leadership and pride in American citizenship,” said Byrd. “And we also try to develop a keen interest in the detailed study of our government. Some guys come in on Sunday because a brother came to the program and said ‘You need to go.’ But by the end of the week, they have a better understanding of the government and how it works.”

To sum up the program, Collins said, “Boys State is a fantastic program. I’ve learned a lot, I’ve had a lot of fun and I don’t regret my decision to come here at all.”