Summer standards — corn and squash are the best 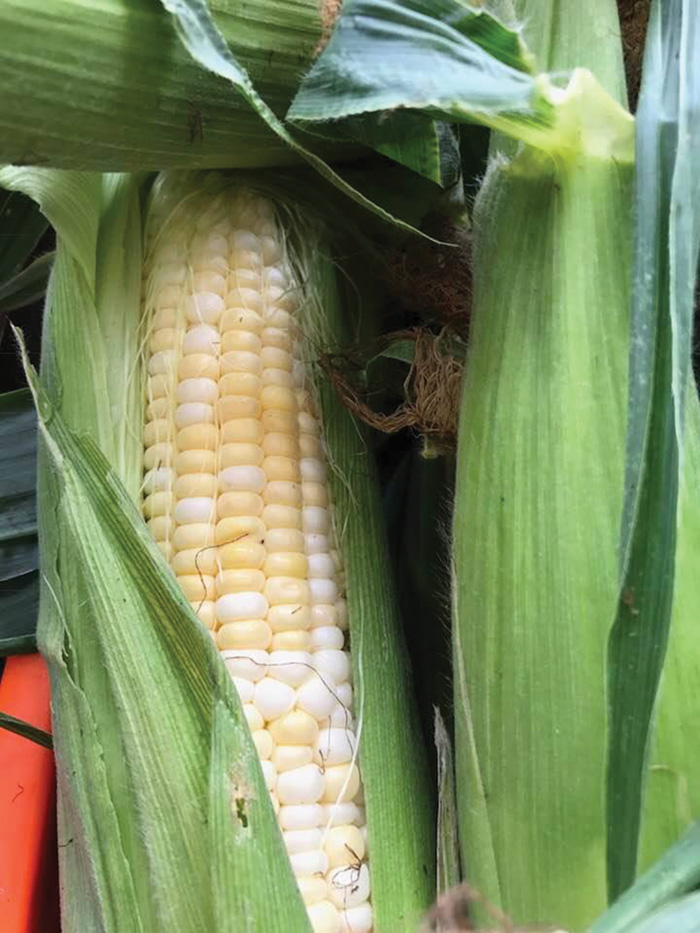 Deirdre Parker Smith/Salisbury Post The first corn has appeared at Salisbury-Rowan Farmers' Market. Mike Miller had both Silver Queen and bi-color corn. You can expect more this weekend.

The corn has arrived at the Farmers’ Market, and you’d better get there early to get yours, at least at first.

Silver Queen or King corn is available, as well as the bicolor corn, which combines the best of both worlds.

The easiest way to cook it is to shuck it, set a big pot of water on to boil. When it’s at a full, rolling boil, add the corn. Cover, turn off the heat and let it sit for 5-10 minutes. Remove from water, slather with a lot of butter and salt and serve.

The best way to store corn is in the husk, in your refrigerator, uncovered. Use as soon as possible to avoid the sugars turning into starch.

You can also cook corn in the microwave. Some people leave it in the husk, then peel it with paper towels after it’s cooked. Times can vary from 2-5 minutes, but if you cook it much longer, it will be too soft. Some cooks suggest shucking it and wrapping it in damp paper towels before microwaving. Another suggestion is to set the corn in a steamer basket over about an inch of boiling water and steam it for about 5 minutes.

The best recipe for corn is usually the simplest. If you can’t manage it on the cob, cut the kernels off and lightly cook them in a little water. One suggestion we found on the internet suggested boiling it in milk and butter on the cob.

Grilling is nice, if you are careful. The best method is to pull back the husks and remove the silks. Brush the corn with olive oil (butter can burn) and grill over medium high heat, turning occasionally until the husks are charred — about 15 minutes. Let it cool enough to handle and eat.

Yellow squash might be the most ubiquitous vegetable of summer. Surely, you’ve worked in an office where bags of squash magically appear or you’ve found a basketful outside your front or back door.

Do you make your casserole with canned soup and Pepperidge Farm stuffing mix? Or are you a cheddar, eggs and Ritz crackers person?

I found recipes in several church cookbooks that included grated carrot, which adds some sweetness. Others are just squash, onion and sauce, with something crunchy on top.

One of the easiest and prettiest ways to serve patty pan squash is to slice it crosswise, top with a little salt and pepper and roast on an oiled baking sheet until tender. Top with some fresh herb, such as basil, thyme or chives and serve as a side dish.

You can also stuff the patty pan as you would a round zucchini. A filling of sautéed mushrooms and spinach would be good.

Or, you can use it for a squash casserole or in a summer vegetable tray of roasted veggies. They also make fun dippers for a raw vegetable plate.

Make a patty pan personal pizza and cook it on the grill.

While the grill (or a stovetop grill pan) is heating, slice the squash into quarter-inch thick pieces and lightly brush with olive oil on both sides.

Place the squash slices on the grill over direct high heat and grill for 4-5 minutes, with the lid closed as much as possible. Look for grill marks before turning.

Flip slices over and top with a little sauce, the cheeses and the pepperoni. Cook another four minutes or until cheese is melted and bubbly.

Remove from grill and allow to cool for 5 minutes, then sprinkle with basil.

Half a medium onion, chopped

1 cup shredded cheese such as cheddar or Monterrey Jack

Scoop out some of the flesh, leaving a quarter inch zucchini all around and set aside. Season zucchini shells lightly with salt and pepper. Parboil or bake until zucchini is slightly tender, but not soft.

Meanwhile. brown the chorizo with the onion and reserved zucchini flesh, drain off most of the liquid and add the cilantro or parsley. Lightly stuff zucchini shells and cook at 350 degrees for about 30-40 minutes, until shells feel tender. With about 10 minutes to go, top with cheese and allow to melt.

Serve two halves to the hungriest people, and one half to lighter eaters. This is good with a cool side dish, such as sliced tomatoes with basil and fresh mozzarella cheese or a salad of tomatoes and cucumbers that have been dressed lightly with oil and vinegar.

Cook corn on the grill as above and then remove husks and slather with a heaping spoonful of mayonnaise. Add the juice of a lime wedge, followed by a pinch of salt, a sprinkle of cheese and dusting of cumin and chili powder. Pass the napkins.

Cook squash and onion in a large skillet over medium heat until squash is tender, but not mushy. Drain well and place in a colander.

In a medium bowl, mix together cracker crumbs and cheese. Combine half the cracker crumbs with the cooked squash and onions. In a small bowl, mix together eggs and milk, then add to squash mixture. Stir in 1/4 cup melted butter, and season with salt and pepper. Spread into a 9-by-13-inch baking dish. Sprinkle with remaining cracker mixture and dot with the 2 tablespoons of butter.

Bake for 25 minutes, or until lightly browned.

This creates a custardy casserole.

Additions: Stir in some fresh or dried thyme, basil or oregano to the mixture before baking. Use pepper jack cheese instead of cheddar. Add cooked, crumbled bacon.

Make it a whole meal and add half a rotisserie chicken, shredded. Or add a half pound of browned ground beef or pork sausage. If you use the sausage, you can call it a breakfast casserole.

Preheat oven to 350. Cut squash into 1/4 inch slices. Add squash and chopped onion to a pan with a 1/2 cup water. Cook until almost tender. Drain well.

Bake at 350 degrees for 30-40 minutes or until bubbly and golden brown. If necessary, shield with foil to prevent too much browning.

For Corbin Elliott ‘It’s more than entertainment. It’s a…