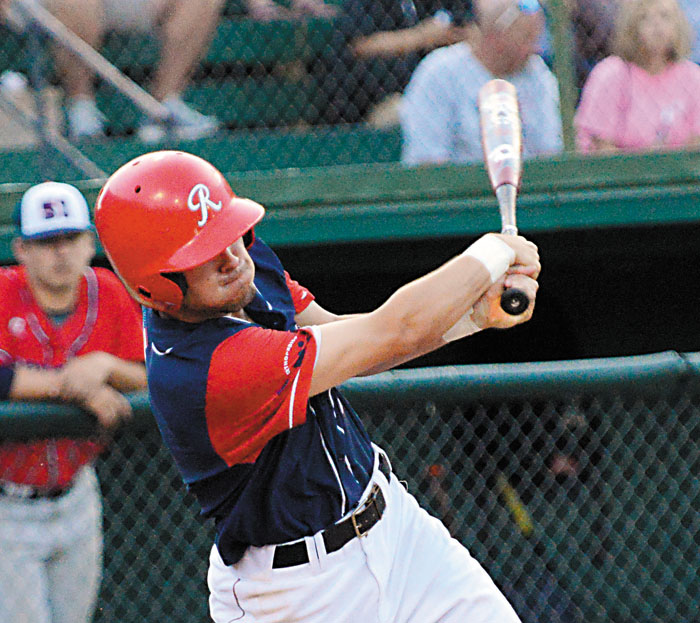 Wayne Hinshaw FILE PHOTO/for the Salisbury Post ... Rowan’s Clayton Gilmore, shown in an earlier game this season, had three hits, including a triple, in Tuesday night’s 14-7 win at Kernersville.

KERNERSVILLE — Rowan County American Legion hitters enjoyed their most explosive night of the season and cruised to a 14-7 win at Kernersville on Tuesday night.

It was a good ballgame for five innings. The visitors led only 6-4 going to the sixth, but that’s when Rowan (15-5) batted around and scored seven times to break it open.

Rowan has played well lately and has won five of its last six as it prepares for a return to divisional play on Thursday at Kannapolis.

Rowan’s defense was stout (no errors) and pitchers Daniel Sell, Jake Perez and Daniel Durham had their moments. Perez registered his first Legion win, becoming the ninth different Rowan hurler to get a victory this season.

Rowan scored three in the top of the first against Kernersville starter Bryant Carrey. Setzer led off the game with a double. Cleanup man Mize provided the big blow of the inning with the first of his triples.

Rowan never lost that lead, although it got tight temporarily after Sell walked Kernersville’s No. 8 and No. 9 hitters in the second. Those free passes helped instigate a four-run inning for Post 36.

Rowan’s seven-run sixth opened with Wagner and Cameron Graham drawing walks at the bottom of the lineup. Then the fireworks began. Setzer’s second double made it  7-4. Gilmore’s two-run triple pushed the lead to 9-4.  After two outs, Lippard connected on a long one, and it was 11-4. It was 13-4 before Kernersville (2-8) could get the third out.

Perez pitched well in the fourth and fifth before running into trouble in the sixth when he had a comfortable cushion. Durham relieved and got the last out in the sixth.

After Setzer crushed a homer to straightaway center in the top of the seventh for Rowan’s 14th run, Durham closed it out.

NOTES: Rowan’s 11-10 division loss at Mocksville — Mocksville broke a 17-game losing streak against Rowan in that one — has made the Southern Division race more interesting than usual. Kannapolis, with a boost from standout players from Cannon School and Northside Christian, is also making noise and has been strong lately.  … Rowan has swatted 15 homers. Mize leads with four, all in Rowan’s last 11 games, while Atwood, Setzer and Luke Barringer have slugged three apiece. Lippard has two. … John Owen (4-0) is the probable pitcher for Thursday’s game against Kannapolis at Northwest Cabarrus High. … A full boxscore in in Scoreboard.