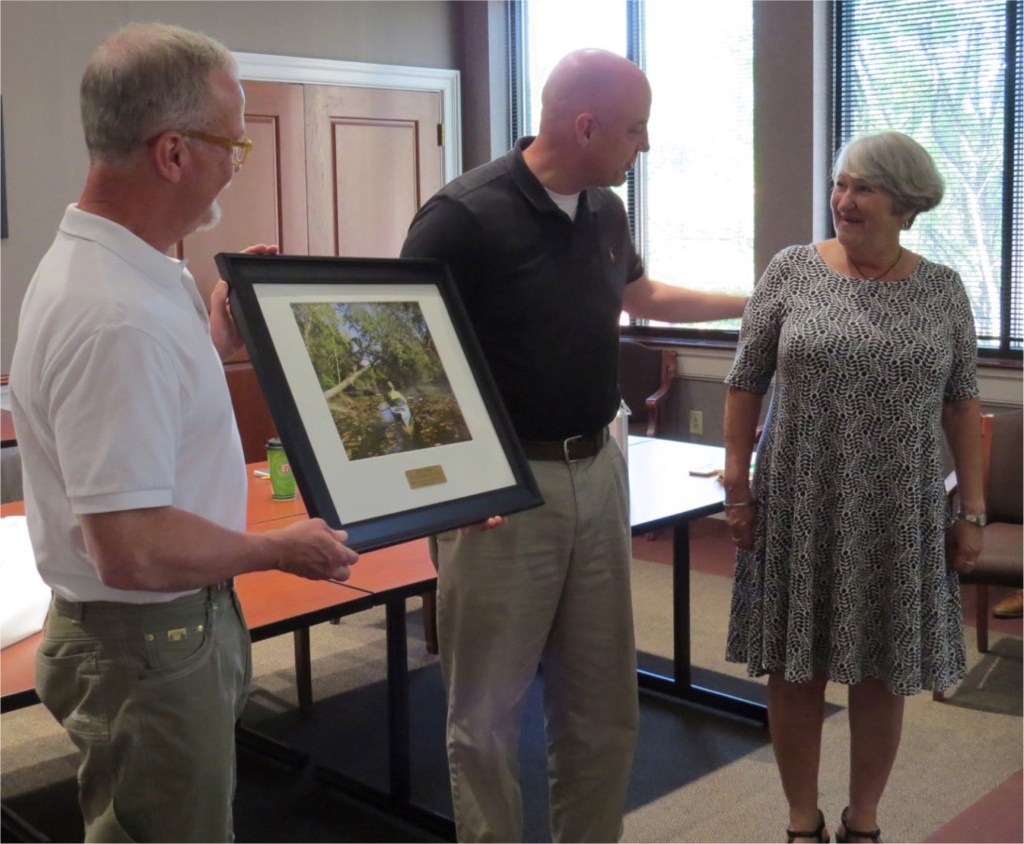 According to LandTrust bylaws, board member terms are three years and board members can serve a maximum of three terms.

Ed Norvell is from Salisbury and has served nine years on the board, including serving as board president. Norvell was a LandTrust employee in its early years. He serves on other boards, including that of North Carolina Coastal LandTrust. Norvell was presented with a wildlife sculpture for his service.

Dennis Testerman is from Cabarrus County and served six years on the board. He was formerly employed by the Cabarrus Soil and Water Conservation District. Testerman was presented a framed picture of Clarke Creek Rookery, a partnership project between LandTrust and Cabarrus SWCD.

Walter Holland is from Iredell County and served six years on the board. Holland has a farm under conservation easement with LandTrust in Iredell County. Holland will be presented a photo of the Stokes Family Farm, which was protected during his tenure on the board.

Kluttz is the owner of Quality Sprinkler Co. in Charlotte who donated a conservation easement on a 90-acre property in Anson County. Kluttz manages his property for wildlife and has a particular interest in bees and pollinators.

Huneycutt is a Stanly County native and the owner of Locust Lumber. He is an avid outdoorsman who manages his land for wildlife and is also an easement donor of property on the Rocky River in Stanly County.

Crump is city manager of Rockingham and is a member of the N.C. Wildlife Resources Commission. Crump has 34 years of experience in local government administration and community and economic development. He is a lifetime resident of the Yadkin-Pee Dee River Region and is a conservationist with experience and leadership in resource protection issues.

Kerney is a resident of Montgomery County and is a graduate of North Carolina State University and Methodist University. She was a police officer for 13 years. Kerney has been involved in outdoor activities, wildlife and hunting her entire life. She recently moved back to Montgomery County and enjoys kayaking and hiking in the Uwharries.

Fisher is a former LandTrust intern who lives in Salisbury and is a project manager for Carrol Fisher Construction Co. He is in the Coast Guard Reserve and has studied fisheries, wildlife and conservation biology at N.C. State University. He graduated from Cape Fear Community College with degree in sustainability technologies.

Emrich is executive director of the Anson County Chamber of Commerce. She was promoted to her current position with the chamber in August 2016 after having served as interim director and working for the chamber for five years.

The LandTrust board now has a total of 18 members.

“The LandTrust is very fortunate to have supportive board members who have given many years of service to this organization in our conservation mission, and also blessed to have talented new board members to volunteer to serve in the coming years,”said Executive Director Travis Morehead.

To learn more about LandTrust for Central North Carolina, contact Crystal Cockman at 704-647-0302 or crystal@landtrustcnc.org.