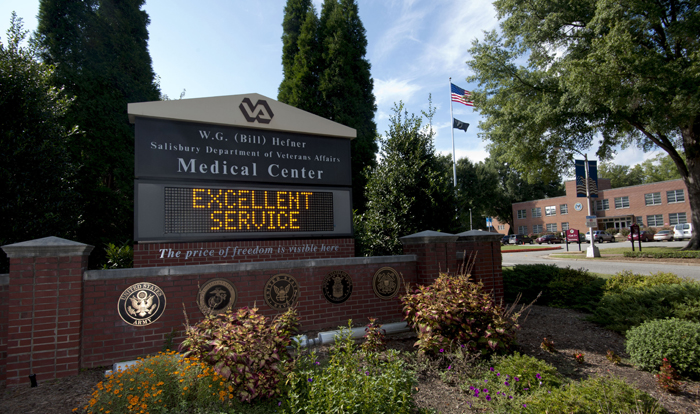 SALISBURY — Across the VA nursing home system, the W.G. (Bill) Hefner VA Medical Center in Salisbury has a one-star rating, putting it among the lowest rated in the country.

“Does it mean we have areas to improve? Absolutely,” said Joseph P. Vaughn, who has been director of the Hefner center for less than than three months. “(But) I don’t want people to see that and think veterans are getting horrible care here because it’s just not the case.”

Nursing home care at the Salisbury VA is in Building 42 and Building 43, which is the hospice center. The N.C. Veterans Home on the Hefner VA campus is a separate entity and not part of the VA ratings reported here.

Hospital care at VA medical centers is judged separately, and the Salisbury VA in recent ratings has fluctuated between three and four stars out of five.

The hospital ratings compare the country’s 146 VA medical centers among themselves on dozens of factors such as death and infection rates, instances of avoidable complications and wait times.

But ratings for the nursing home component, or 132 community living centers (CLCS) in VA hospitals, compare those VA services with 15,487 private-sector nursing homes rated by the Center for Medicare and Medicaid Services.

Vaughn and VA officials as a whole make the case that the VA on average cares for sicker and sometimes much different patients in its nursing homes than private facilities do.

“Also,” a U.S. Department of Veterans Affairs release said, “private-sector nursing homes admit patients selectively, whereas — unlike the private sector — (the) VA will not refuse service to any eligible veterans, no matter how challenging the veteran’s conditions are to treat.

Vaughn added, “In the VA, if you’re 70 percent service-connected and you need nursing home care, you’re going to get it.”

Vaughn emphasized Tuesday afternoon in an interview with the Post that “not a single veteran has told me they want to leave our CLC.”

“Most tell me they are really happy,” Vaughn said.

The Hefner VA had a three-star CLC rating earlier this year, but the new nursing home metrics came out, dropping it to a one-star rating.

By the VA’s own accounting, the Salisbury medical center is one of only 11 one-star CLCs out 0f 132 in the VA system.

But a USA Today report Sunday said nearly half of VA nursing homes nationwide — 60 — received the one-star rating as of Dec. 31, 2017. At that time, the Asheville VA Medical Center also had a one-star rating, though according to the VA it is now up to two stars.

The Durham VA has a four-star rating in nursing home care; the Fayetteville VA, a two-star rating.

Even though the Hefner VA in Salisbury had a one-star rating, the U.S. Department of Veterans Affairs’ own report reflected “improvement” for the facility. The Durham VA also improved, while Fayetteville and Asheville showed “no change.”

The USA Today/Boston Globe’s lengthy report Sunday said statistics the VA had failed to release until now painted a picture of government-run nursing homes scoring worse on average than their private sector counterparts on nine of 11 key indicators (in 2017), including these five:

• Percentage of residents who reported pain within the past five days.

• Percentage of residents who received antipsychotic medicine, which the Federal Drug Administration has associated with an increased risk of death in elderly dementia patients.

• Percentage of patients who experienced a marked decrease in their abilities to perform daily activities such as bathing, eating and using the bathroom.

• Percentage of patients who had a catheter left in their bladders, which can lead to urinary or blood infections and other complications.

• Percentage of high-risk patients with serious bed sores, which may be prevented by repositioning and/or cushioning.

Vaughn said the Hefner VA’s last nursing home survey by an outside body was done by the Long Term Care Institute, and “we did not do as well on that as I would like to see us do.”

In another case, a patient required a special cushion for his wheelchair, but the purchase order for that cushion was lost and it took two weeks for the cushion to arrive.

“That was a big hit for us,” Vaughn said.

In a third instance, a patient fell, and it was determined better staff training was needed for preventing such occurrences.

Vaughn said the staff, in response, also has better plans to track orders, and reminders have been placed in the electronic records system about when to administer pain medication in the dressing of wounds.

“Our CLC team is committed to getting these things fixed and (having) long-range plans in place,” Vaughn said.

But the Salisbury medical center also scored low — one star — when the rating system looked at 13 quality metrics. On nine of those, Vaughn said, the Hefner VA was below the national average, based on the Medicare data.

But on seven of those nine, Salisbury already was showing significant improvement a couple of months ago, Vaughn said.

“Some things were self-inflicted,” he added of reasons for the poor scores.

The Hefner VA incorrectly documented one resident as being restrained — something which should almost never be an option given available alternatives.

But Vaughn said in this case it was a wheelchair resident who was shown as being “restrained” because he had a seatbelt, which he could release at any time.

But once that documentation error was in the system, it stayed there for a year. Without it, the Hefner CLC would be at least two stars.

“My goal is always to be a five-star,” Vaughn said, “but that one-star could have been avoided (except for the documentation error).”

Other things noted in the Hefner VA’s low quality scores in nursing home care were a higher number of “pressure ulcers” (bed sores) than in the rest of the nursing home community.

Vaughn said the hospital has been able to reduce bed sores by 40 percent.

Vaughn said the VA probably will always be higher (and thus penalized) in providing antipsychotic and pain medications because of the kind or nursing home residents they accept.

Many residents are dealing with things such as PTSD and dementia, plus the veterans might have serious injuries you wouldn’t see in regular nursing homes, Vaughn said.

To shake its one-star rating, the Salisbury VA will have to improve at a pace that’s better than other CLC facilities. Vaughn said the hospital is committed to that.

“Generally, the comments I get are very positive from our residents,” he said.