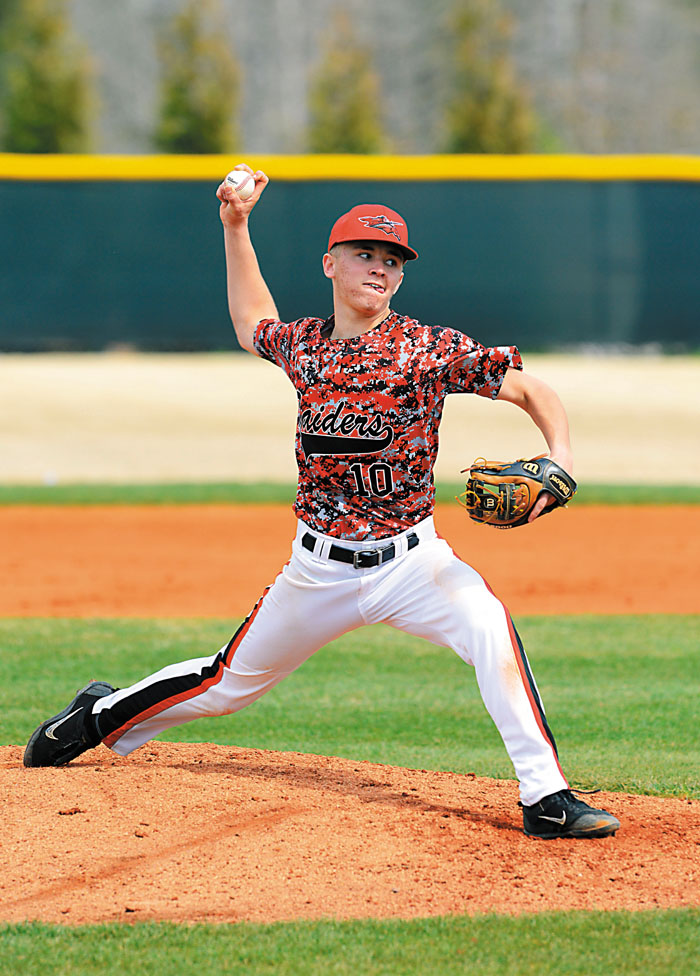 Wayne Hinshaw / Salisbury Post file photo South Rowan’s Walker Joyce pitches during a game against Carson on March 25, 2017. Joyce is a junior college All-American, and he will be pitching for Division I East Tennessee next season.

He manhandled the top-ranked team in the nation in his division and broke a stack of pitching records as a freshman at Rockingham Community College. Now the 6-foot-1, 175-pound right-hander is moving up and moving on. Next season, Joyce will be pitching for Division I East Tennessee State in Johnson City.

“There were actually quite a few offers and a decision I had to make,” Joyce said. “I had offers from North Carolina A&T and UNC Greensboro.”

Not that long ago, offers were scarce for Joyce. His velocity wasn’t quite rapid enough. Physically, he wasn’t imposing enough.

“I didn’t get recruited a lot in high school,” Joyce said. “I had a few Division II offers. The best one was from Belmont Abbey.”

Joyce was really tough in high school at South, although it was career that frequently flew under the radar.

But it was still easy for him to be under-appreciated. South was always finishing third or fourth in its league, always seemed to be chasing West Rowan, Carson and East Rowan. People who saw him pitch realized Joyce was good, but the perception was that he wasn’t on the level of  guys he pitched against  — Carson’s future draft pick Owen White, West’s Austin Love, who signed with UNC, and East’s John Owen, twice the Rowan County Pitcher of the Year.

Joyce pitched for the South jayvees as a freshman. He logged one varsity inning in the 2014 season. He seemed more likely to be a star in soccer than baseball.

South was blessed with hurlers in 2015 when Joyce was a sophomore, guys such as Blake Johnson, Burke Fulcher, Bo Corriher and Dillon Norton. Joyce played some outfield and was effective when he got on the mound. He got a win against rival A.L. Brown and he saved South’s big victory against powerhouse Lake Norman in the annual Easter tournament at Intimidators Stadium in Kannapolis.

Joyce was a rotation anchor for the first time for South coach Thad Chrismon in 2016 as a junior. He displayed a wicked curveball and put up a 2.61 ERA, logging 58 strikeouts and only 12 walks. He beat East, the biggest triumph of his career to that point, and he helped beat Carson with a three-hit night at the plate.

He was terrific as a senior last spring. He threw the game of his high school career against Central Cabarrus in March. Matched up with Central Cabarrus stud Cameron Kepley (Appalachian State), Joyce fired a no-hitter and fanned 16. That game went eight innings, with South finally prevailing, 1-0. Joyce also beat Carson and East. He shut down Hickory Ridge  completely in the South Piedmont Conference tourney semifinals. Then in the first round of the 3A state playoffs, South traveled to Hickory.  Joyce went the distance and struck out 10, with no walks, in a 7-2 victory.

That was Joyce’s final high school game — and he still hadn’t signed.

Summer arrived, and Joyce was on the roster for the Mooresville Spinners wood bat team. Reece Honeycutt, a former South Iredell player and coach, was piloting the Spinners. Honeycutt was also the head coach at Rockingham Community College. He and Joyce hit it off. A classic, over-the-top pitcher in high school, Joyce had done some travel-ball experimenting with throwing from lower arm slots, and Honeycutt told him he could continue to explore multiple-slot possibilities if he came to Rockingham.

That was the start of the transformation of Joyce from a very good pitcher to a great one.

Academically, Joyce was fully qualified to attend a four-year school coming out of South, but he took a gamble, heading to a  junior college about 30 miles north of Greensboro and seven miles west of Reidsville. He put his faith and his future in the hands of Honeycutt and RCC pitching coach Will Greene.

Joyce is a standard three-pitch hurler — fastball, curveball, changeup — but now he was employing three different arm angles —submarine, three-quarters and over-the-top. It’s highly unusual for a pitcher to be able to throw strikes consistently from three different release points, but Joyce was a natural. He mastered his new style after weeks of work.

“No one really knew who I was at that point, even guys on my own team didn’t know me,” Joyce said. “But I shut them down. We ended up losing the game, 1-0, but guys realized that I could help the team.”

Joyce was at the forefront of what turned out to be a Cinderella season for RCC, which is not a traditional power. Joyce found that changing arm angles constantly kept hitters off-balance, and he often dominated games. He combined unusual movement and deception with old-school stamina. When he took the mound, he was out there to finish what he started. He piled up strikeouts at a school-record pace.

A committee of Joyce, catcher Christian Ruff and the coaching staff would go over scouting reports and determine what angles and what pitches would be effective against specific batters. Opposing hitters batted .214 for the season against Joyce.

In April, RCC was still struggling to get to .500,but the Eagles finished with a surge. They finished second in the regular season in Region X Division III and then beat Surry Community College in the finals to win the region tournament.

When the pairings were released, it didn’t look promising for RCC. As owners of the weakest record in the field, RCC was seeded eighth in the eight-team World Series. The opponent would be Herkimer, a New York school that was No. 1 in the country.

Joyce went out and dominated the No. 1 seed. He had a no-hitter until the fifth and a shutout until the seventh. He threw a complete game, a 9-1 victory shortened to seven innings by the mercy rule. Joyce struck out nine, walked two and allowed four hits in the biggest win in program history.

Honeycutt told reporters it was the best pitching performance he’d seen in his coaching career.

RCC won one more game in a wet World Series before dropping two and finishing fourth.

The season helped put RCC on the map, and Joyce (8-4) finished it will all sorts of accolades. Besides being the region pitcher of the year, he was all-tournament at the World Series and a third-team All-American.

Joyce set season program records at RCC for innings pitched (85 2/3), strikeouts (96) and ERA (2.00).  He was among the national leaders in all three categories and he tied the program record for wins.

RCC is normally a two-year school, but Joyce was attending RCC for the opportunity to advance to a D-I school, not because he had to upgrade his academics.

He’ll have three years of eligibility at East Tennessee State. The Bucs were pretty good this season (28-25). They compete in the Southern Conference against schools such as UNC Greensboro, Western Carolina, Furman and Wofford.

“It’s a great opportunity and I’m thankful,” Joyce said. “Division I is what I always wanted.”