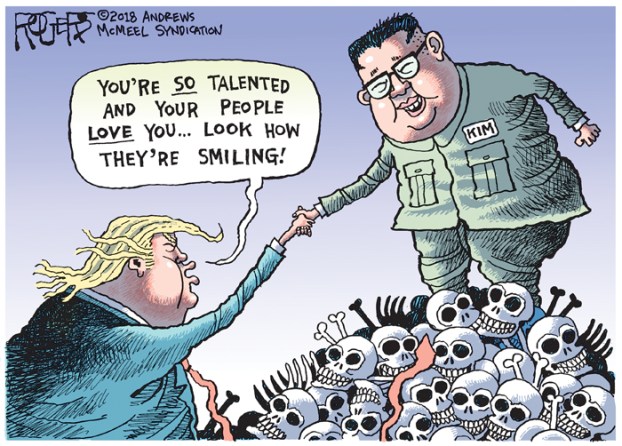 That was my reaction the day after the election of Donald Trump in November of 2016, when it dawned on me that I would be serving my year as president of the Association of American Editorial Cartoonists during the same time as the guy who wanted to “open up” libel laws and weaken the First Amendment so he could sue journalists more easily. Instead of the usual loss of jobs for editorial cartoonists that a president of the AAEC has to address during his or her tenure, now I’d be dealing with a much more fundamental threat to our profession: a president of the United States who has no idea or respect for the institution of a free press and its role in a democracy.

I did worry that editorial cartooning would be the next target of a president so enamored of visuals. That didn’t happen. In retrospect, I’m fairly certain it’s because Trump doesn’t read; he gets all his news from the television (Fox News) and uses Twitter as his megaphone. And I’m guessing his staff doesn’t cut out cartoons and tape them to the White House refrigerator so he will see them as he goes for his regular two scoops of ice cream.

But with the firing of Pittsburgh Post-Gazette cartoonist Rob Rogers, we now see that suppressing a free press can be accomplished without an authoritarian president’s orders. Michael Cohen isn’t the only “fixer” Trump has at his disposal.

Rogers has been the editorial cartoonist for the Pittsburgh Post-Gazette for more than 25 years. Most working cartoonists have had an occasional idea spiked by his or her editor. But in the past few weeks, editorial director Keith Burris and publisher John Robinson Block have refused to publish six of Rogers’ cartoons, all criticizing Trump or his policies. Block and Burris have also rejected many of Rogers’ rough sketch ideas for several months.

This wasn’t the first time Block has used his position to defend President Trump’s actions; in January he demanded an editorial run in the Post-Gazette and the Toledo Blade (where he is also the publisher) supporting Trump’s use of the term
“sh-thole countries.”

I realize now I didn’t recognize this other danger of an authoritarian president: his enablers and the willing supporters who squash dissent and help attack the free press and subvert the Constitution.

The fact that Trump will use any opportunity to spread lies and whip up hatred toward journalists only enables his powerful supporters in the media to do his dirty work for him.

In April, another disturbing example of journalistic manipulation was exposed when a video surfaced showing news anchors from 45 Sinclair-owned stations reciting word for word the same script criticizing the mainstream media and spouting the “fake news” accusations that Trump uses in his diatribes. While Trump used the opportunity to blast its critics and offer his support for the “superior” Sinclair Broadcasting, he hadn’t orchestrated this abuse of journalistic integrity. He didn’t have to; there were others willing to do it for him.

Ann Telnaes is an editorial cartoonist for The Washington Post. She won the Pulitzer Prize for Editorial Cartooning in 2001.

Editor’s note: Rogers is among the cartoonists whose work the Salisbury Post has used for years.

Throughout my life, I’ve often marveled at friends who master certain trades. I always ask, “Where did you learn that?”... read more