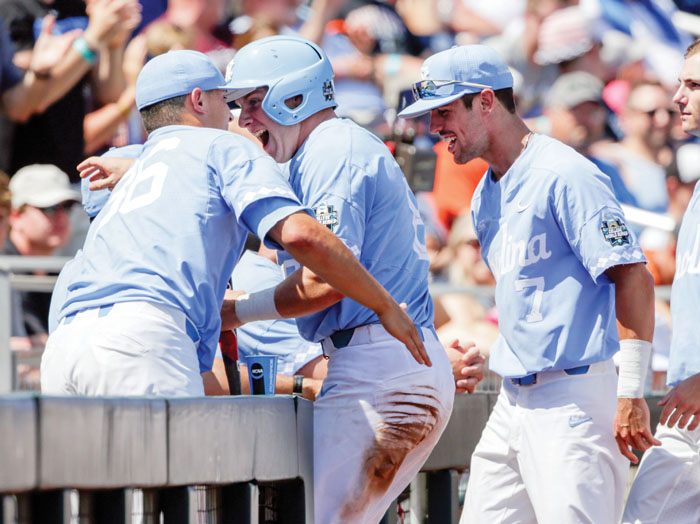 AP Photo/Nati Harnik .. North Carolina’s Ike Freeman, center, is greeted at the dugout by Joey Lancellotti (36) and Dallas Tessar (7), after scoring against Oregon State in the third inning of the opening game of the College World Series in Omaha, Neb., Saturday. The Tar Heels won, 8-6. Freeman, a former East Rowan High School star, had three hits in the game.

OMAHA, Neb. (AP) — It took nearly 4 1/2 hours in 95-degree heat to play the opening game of the College World Series.

Time flew for North Carolina coach Mike Fox. He was having fun.

The Tar Heels knocked out Oregon State ace Luke Heimlich during a five-run third inning and went on to beat the Beavers 8-6 on Saturday.

“I liked being in the third-base coaching box in the top of the third. Felt I was out there for a while,” Fox said. “For me, the more you’re out there, the better. I get it. It was a long game. But they’re not long for me, and they’re not long for the coaches and players.  Sometimes it’s agonizing for the people watching. We’re not trying to drag it out by design.”

The Tar Heels (44-18) used six pitchers in a 4-hour, 24-minute slog that was the longest nine-inning game in CWS history. They turned back threats in the sixth and seventh innings and prevailed against an opponent they hadn’t faced since losing to the Beavers in the 2006 and ‘07 CWS finals.

The Tar Heels built leads of 6-1 and 8-4, but Oregon State (49-11-1) was poised to go ahead in the seventh after loading the bases with two outs against Josh Hiatt and Steven Kwan coming to bat. Kwan had reached base on his first four trips to the plate and had struck out only 15 times in 247 at-bats, making him one of the toughest players in the nation to strike out. Cooper Criswell came on and struck him out on three pitches.

“My goal is to go out and get ahead in the count. I was able to do that,” Criswell said. “I think he was a little froze on the second fastball I threw him. I think he might have been expecting something else. And on the slider for strike three, (Brandon Martorano) did a great job framing that pitch and getting that one for me.”

The Beavers were uncharacteristically sloppy while losing their third straight game over two years in Omaha. Carolina scored on a passed ball, and the Beavers committed three errors after making one in their first five NCAA Tournament games.

Last year, Heimlich left the team for super regionals and the CWS after it was revealed he had pleaded guilty to molesting a young relative when he was 15. The university allowed him to return to the team this year. He served two years’ probation and went through a treatment program but denied wrongdoing in recent interviews with Sports Illustrated and The New York Times.

There was no discernible negative crowd reaction during pregame introductions; Oregon State fans behind the third-base dugout loudly cheered Heimlich.

The first two Carolina batters reached base each of the first three innings, and the senior left-hander was charged for the Tar Heels’ first six runs. He hit three batters, walked one and struck out two in his shortest outing since going 2 1/3 innings against Southern California on May 21, 2016.

Heimlich said he might have started pressing when things weren’t going his way early and he lost command of his pitches. He downplayed the conditions.

“We’ve pitched in the heat before,” he said.

“It’s tough when you can’t throw the ball across the plate, and he wasn’t used to that,” Casey said. “He just never had a rhythm and he could never find it. And when you have a guy that’s an All-American and gives up six earned in three innings, that’s tough.”

Caden O’Brien (7-0), the second Carolina pitcher, worked 1 2/3 innings for the win. Criswell pitched the last 2 1/3 innings for his first save.

“Coach said since it was going to be so hot it would give us an upper hand due to the weather we experience in North Carolina,” designated hitter Ben Casparius said. “I know all the guys really take care of themselves and use what’s around us. So I think it helps us today and we’ll keep rolling.”

Fox said his team played with a heavy heart after learning former North Carolina pitcher Zach Attianese and his father died in a car accident in Michigan on Friday night. Attianese left after his freshman year in 2017, pitched at a junior college and was committed to playing at Florida State next season.

North Carolina starter Gianluca Dalatri threw only 15 pitches before leaving with two outs in the first inning. Dalatri had missed 12 weeks with a street reaction in his right (throwing) elbow and was making his fifth start since May 19.

“He basically said he just didn’t feel right,” Fox said. “That’s all he needed to say, quite honestly. He said he didn’t feel like he had anything on the ball. With his past history, we needed to make a change.”

A bizarre ‘moving’ day at the US Open