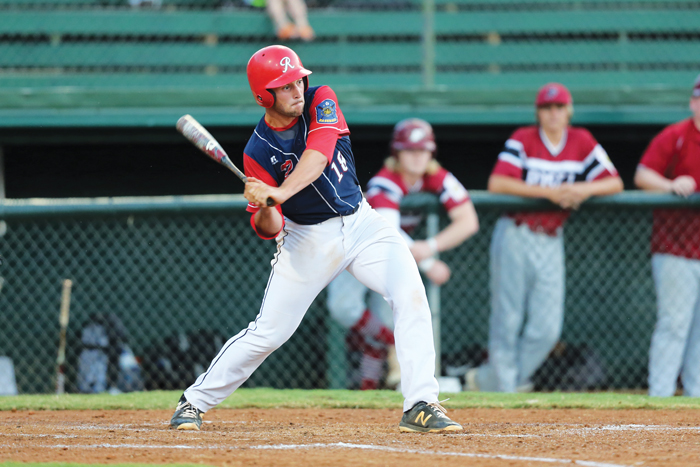 SALISBURY — The only thing not to like about Hayden Setzer Saturday night was having to face him.

Rowan County’s tall left-hander was at his formidable best, hurling a complete-game four-hitter in a 7-0 victory against Sumter, S.C. at Newman Park.

“I really didn’t feel much pressure out there,” Setzer offered, after Rowan (14-4) prevailed again in the NC/SC Challenge. “If that’s not the one place you want to be, you might as well not be out there. I love doing this. I love pitching.”

It certainly showed. Setzer braided a macho fastball with a knee-buckling change-up and his signature, take-a-seat slider in a polished, 100-pitch effort. He struck out seven, walked two, scattered four singles and faced only 25 batters, just four over the minimum.

“Once they scored a couple of runs, we were out of it,” losing coach Curtis Johnson said, after Sumter (6-6) absorbed its fourth straight loss and second of the day. “Their pitcher was too good. He was throwing his breaking ball, fastball and change-up for strikes — and our guys struggled to pick anything up.”

Setzer dissected the strike zone with precision and purpose, allowing only one Sumter baserunner to reach third base. Rowan coach Jim Gantt said the East Rowan product was sound mechanically and repeated his delivery, a tick that helped maintain his timing.

“That was important,” Gantt noted. “He’s tall, he’s long and lanky. And repeating that delivery, with his long levers and limbs, can be a problem sometimes. It’s hard to harness that when you’re that long. That’s the difference between a major league pitcher and a double-A pitcher. The big league guy can repeat his delivery more times.”

Rowan catcher Trevor Atwood found another reason to gush over Setzer. “He took the ball and mixed it all up really well,” the backstop said. “He could locate his slider early and late in the count. And his fastball automatically has movement on it, but it was really moving tonight.”

Rowan opened the scoring against right-hander Charlton Commander in the last of the third. CP Pyle paddled a two-out triple that rolled to the wall in right-center and Atwood followed with a searing, ground-ball double into the left-field corner. Three batters later, teammate Luke Barringer drew a bases-loaded walk  — Commander’s third of the inning and sixth of the game — to make it 2-0.

In the fourth, Rowan tacked on three more runs against side-armer Josh Sykes and Daulton Dabbs. Sykes faced six batters but walked two of them, hit two others and unleashed a wild pitch. With Pyle on third and two away, Dabbs balked home Rowan’s fifth run.

Then in the bottom of the sixth, Atwood turned on a 1-0 fastball from Daniel Reynolds and clouted his third homer of the season.

“The first pitch was a curveball and it was high,” Atwood said. “I was almost positive that a fastball was coming next and it did. Being a catcher, it helps because you usually can guess what a pitcher is thinking.”

Back-to-back doubles by Wayne Mize and Chandler Lippard produced Rowan’s final run. In the Sumter seventh, Setzer faced off against four straight pinch-hitters and used a strikeout, a tapper back to the mound and a flyout to Pyle in center to finish his gem.

“When he made mistakes with his location, he knew immediately how to correct them,” Gantt said. “It shows he’s got a good feel for pitching — and he had it against a good team tonight.”

NOTES: Right-fielder Clayton Gilmore made a sterling defensive play in the top of the third. With Sumter’s Corey Blackley running from first base, he fielded Jacob Holloway’s two-out bloop single and fired a bullet to third-baseman John Owen for an inning-ending gun-down. … North Carolina has won five of this weekend’s six games and clinched the Challenge. … Rowan lefty Maddux Holsouser (0-1) celebrated his 18th birthday on Saturday. He gets the start in today’s 5 p.m. tournament-finale with Rock Hill.