Pitcher perfect: A collection, held within a one-of-a-kind display, reflects a love story 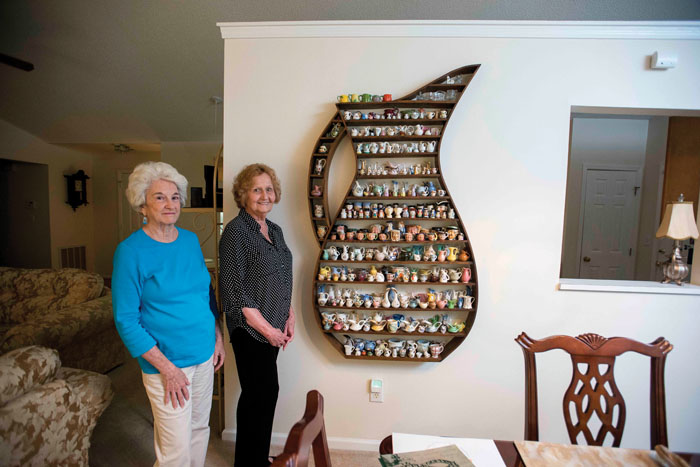 JON C. LAKEY / SALISBURY POST Martha Gettys and Sandra Roakes (right) stand next to the display that hangs on the wall in Roakes' dining room. Sandra Roakes was always amazed by Martha Gettys' mother's collection of hundreds of miniature pitchers and the large display shelf that held them. Gettys' father Mack Owens, brought home 341 mini pitchers for his wife Mary after returning from business trips. Gettys had no room to display the large unique shelf and offered to let Roakes become the caretaker of the collection. Gettys looks forward to visits with her long-time friend to catch up with happenings and also to see the the collection. Tuesday, June 12, 2018, in Salisbury, N.C.

On one of his trips to Salisbury, Mack met a young girl named Mary Hall, who worked in a clothing store downtown. During their courtship and subsequent marriage, Mack returned from his sales trips with presents for Mary — miniature pitchers he had found in gift shops across the South.

Martha Owens Gettys has always considered the pitchers as reflecting a love story between her mother and father. When you add them up, Mack brought 341 of the mostly ceramic pitchers back to Mary from his road trips selling Moon Pies.

But there’s much more behind this collection, and it has to do with Martha’s grandfather and one of her best friends from childhood, Sandra Russell Roakes.

Mack’s dad, Joseph H. Owens, was an accomplished carpenter and cabinetmaker, who became intrigued with his son’s love tokens to his wife.

“When Mother said, ‘What am I going with all of them?'” Martha says, “he created that.”

What she is referring to is beautifully crafted shelving, shaped like a big pitcher, that Joseph Owens built in the 1940s to hold all of Mary’s pitchers.

This one-of-a-kind display piece measures 5 feet, 2 inches high and 3 feet across at its widest point. It includes 14 shelves, six of which extend into the handle and two that form the spout.

Today it hangs on the dining room wall of Roakes — a gift from her dear friend, Martha.

“I mean, how lucky am I to have this?” Roakes asks.

It gives Roakes goosebumps and makes her think of their childhood homes on East Council Street in Salisbury.

“I can almost feel myself standing in front it it, being back in Martha’s living room,” Roakes says. “It always fascinated me.”

Gettys downplays her own generosity. “I’ve never had a good wall,” she says.

Martha’s parents had three children, and she was the youngest.

But the Owenses finally settled for good in Salisbury, where the kids made the East Council Street neighborhood their playground.

“My dad always called us the Snotty-Nosed Kids,” Roakes says. “Our trouble was having fun.”

The women rejoice in thinking back to A.T. Allen School, which was just a short walk away. Martha laughs, describing how the kids tried to look thirsty outside the Cheerwine bottling plant, in case any of the workers would take pity on them.

They purchased candy at the Lyerly grocery. They danced to songs on the Victrola. They played under the streetlights. They explored the nearby woods.

“We had a great childhood,” Martha says, including their mutual friend Shirley Kesler Edwards in the memories.

As close as Roakes and Gettys were, their fathers also became great friends.

Ray Russell — Sandra’s dad — worked for Cannon Mills. Once he settled for good in Salisbury, Mack Owens took a job as a mail sorter at the post office.

The men were “river rats” together, Sandra and Martha say, remembering how they combed the banks of the Yadkin together, fishing or looking for arrowheads.

They had huge collections of arrowheads, coins, currency, stamps and fruit jars.

When World War II came and they were drafted, Owens and Russell left Salisbury by bus on the same day.

Russell entered the Navy and served on ships in the Pacific Theater. Owens trained Marines at Camp Lejuene.

“I remember the day he came home,” Sandra says of her father.

Roakes says her mother was combing her hair as they waited at the house until Ray’s train would arrive at the nearby depot. But the train came early. When they heard the front door open, Sandra immediately thought it was her daddy, but her mother said it had to be their neighbor, Mrs. Morgan.

It really was Ray.

“Nell and I were on our front porch, and we saw him walking up the street from the depot,” Martha says.

The pitcher of pitchers — for lack of a better way to describe it, other than “Mary’s pitchers” —  hung on Mary’s living room wall in Salisbury until it passed to Martha’s sister in Concord.

At Marinelle’s death, Martha realized she didn’t have a suitable spot for it at her house, but she also didn’t want the pitcher of pitchers to be stowed away in an attic.

She knew Roakes had a love — and room — for the big display.

“That’s why Sandra has it,” Martha says. “Sandra has the wall, and I knew I could visit whenever I wanted.”

How did Roakes react when Martha made the offer a couple of years ago?

“I didn’t have to think a second,” she says.

In the beginning, using an old picture she had found, Roakes attempted to place the pitchers in the same order and on the same shelves as Mary had them. It became too overwhelming of a task, so she did the best she could.

The lower shelves have rows of pitchers that are generally two-deep, But the upper shelves hold smaller sizes and go three-deep.

At first, Roakes says her favorites are the Toby mugs, which have interesting faces on them. But she quickly backtracks. “No, I can’t say that,” she says. “I love them all. I absolutely love them all.”

Gettys says her favorite is a tiny red pitcher. You almost need a magnifying glass to find it on one of the middle shelves.

Roakes reports that keeping the shelves and pitchers dusted has not been the big challenge you might expect. If it does become a chore, she jokes, she’ll ask Martha to do it.

Roakes has added only one pitcher to this vast collection. It’s nondescript and tucked away in the corner of a lower shelf.

It’s Sandra’s way of being part of the treasure, but also making sure it remains a tribute to Mary and Mack Owens. And Martha.

The Snotty-Nosed Kids — Gettys, Roakes and Edwards, who lives now in Mooresville — get together when they can for birthdays, holidays and just when the time feels right.

When people visit Roakes’ house, the conversation naturally turns to the pitcher of pitchers on the dining room wall.

“And I always have to tell people how it came to be mine,” Roakes says.

It’s another love story, but this one’s about friends.