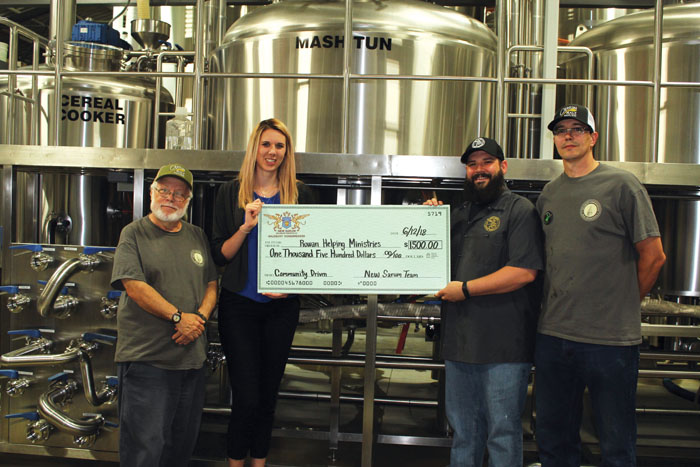 SALISBURY — For the second year in a row, New Sarum has teamed up with the Salisbury Homebrewers Club to donate money to a local charity.

New Sarum co-owner and brewmaster Andy Maben said he came up with the idea just before the brewery’s first anniversary in 2017.

“I had this wild and crazy idea for our anniversary party… (and said) we should do a homebrew competition with them and the winner of the homebrew competition gets to brew a beer with us,” Maben said. “And I was like, even cooler, why don’t we donate all the proceeds to a nonprofit that the club chooses. And they were like, ‘OK, let’s do that.’”

Last year, the nonprofit chose Prevent Child Abuse Rowan, or PCAR. The 2017 winning homebrew raised about $1,500 for the organization.

This year, Maben said they donated $1,500 “on the dot” to Rowan Helping Ministries.

Maben said the competition took place at the beginning of the year and, once the winner was chosen, that beer was brewed by New Sarum for its anniversary party in April.

“Then, whenever the beer sells out, we donate the money,” Maben said.

Maben said this year’s winning beer — Paul’s Black and Blue, created by Paul Lutz — sold out in about three weeks.

“It was a blackberry and blueberry Belgian Kettle Sour,” Maben said. “We used Carolina Malt House malt, 100 percent, which just opened up down the road, and some local blackberries and blueberries.”

“It ends up being about 24 kegs,” Maben said. “And we sold eight kegs of that beer in one day at our anniversary party because of the donation that’s going around it.”

Lynsey Horn of Rowan Helping Ministries said the nonprofit was “very grateful” to New Sarum and the Salisbury Homebrewers Club for the donation.

“A few of our volunteers who are members of the club nominated us a potential recipient,” Horn said. “It’s great to have dedicated volunteers sharing their experiences and representing Rowan Helping Ministries out in the community.”

Horn said the $1,500 would go toward supporting the organization and “its many programs designed to prevent and end homelessness.”

“Their generous donation will go a long way in helping our neighbors in need in Rowan County,” Horn said.

Maben said one of the reasons for the homebrew competition is to show people New Sarum is “community driven.”

“Because that’s what we try to do, is help the community. And a lot of people, there’s a negative connotation when it comes to alcohol,” Maben said. “We want to show people it’s a social thing that can bring a lot of good to the community as well.”