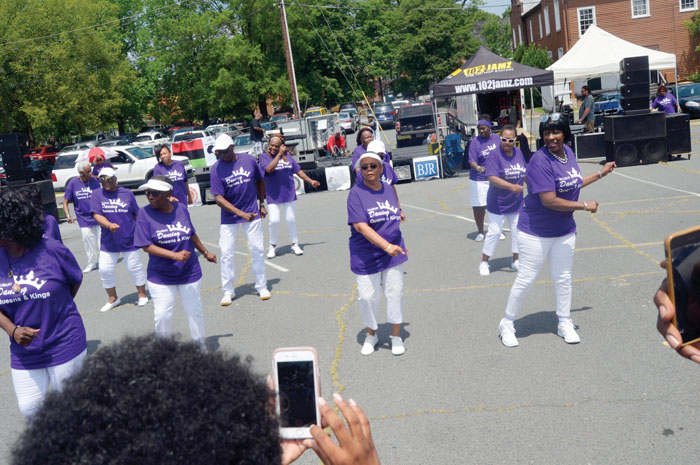 Members of the Dancing Queens and Kings perform a number of line dances during the 23rd annual Juneteenth event held in downtown Salisbury. Shavonne Walker/Salisbury Post

SALISBURY —Beatrice House has been attending the annual Juneteenth celebration for a number of years when it was located at Kelsey Scott Park and she wouldn’t think of missing this year in its new location in downtown Salisbury.

“I come out every time,” she said with a big smile.

House said she always visits with all the vendors and enjoys the music.

“I like mingling with people. You see people you don’t see often,” she said.

Robert “Bob” Bish attended the Juneteenth celebration for the first time on Saturday. Like most of the attendees, he had his sights set on visiting the vendors, especially the food booths.

Bish moved to Spencer about five years ago. He also wanted to support his sister who was a part of the line dance performers — Dancing Queens and Kings.

“It’s good to have this,” he said of the event.

Event chairwoman Yolanda Woods said she got back into organizing the event after a hiatus. She was on the organizing committee years ago with the NAACP and the event has since returned to an NAACP-sponsored event.

“We hope to inspire youth to be the best they can,” she said of this year’s theme.

Juneteenth commemorates the June 19, 1865, announcement of the abolition of slavery in the U.S. state of Texas and recognizes the emancipation of the last remaining enslaved people in the United States.

Texas was the last state in rebellion that allowed slavery after the end of the Civil War. Emancipation was not announced in Texas until almost two and a half years after President Abraham Lincoln signed the Emancipation Proclamation.

The Salisbury Juneteenth celebration continued its legacy with this year’s theme of Sankofa, which means, “Remember the past for therein lies the future.”

This year’s event featured everything from yoga instructors with SoFul Yoga to a number of line dances performed by the Dancing Queens and Kings.

The group is composed of predominantly seniors, 30 females and one male, aged 55 and up, with a focus on exercise, nutrition and anti-stress strategies.

Woods said this year’s event had something for everyone.

“We wanted to give everybody an opportunity for everyone to take part,” Woods said.

She said they were excited that this year’s event was held downtown and hope to make a return to downtown next year.

Each year a number of vendors and artisans also display their delectable foods and treats.

Also at the event were the Kodak Queens — cousins Bria Broadway and Najwa Allison, both natives of Salisbury, who started a photography business based on their love of photography. The women have built a business taking portraits.

The two began their business about six months ago. The two had a vending table at the event.  Allison’s mother had a camera that she passed onto her and then Broadway got into photography.

Tonyan Hunter, who has relocated to Salisbury, is opening a boutique downtown that will also operate a mobile boutique. The shop, which is located on South Main Street, specializes in apparel, accessories, lingerie, wellness products and other gifts.

Her mobile boutique was also in the parade.

Biker group thanks veterans with a barbecue